The “Ugly American” Makes an Appearance at New Construction Site 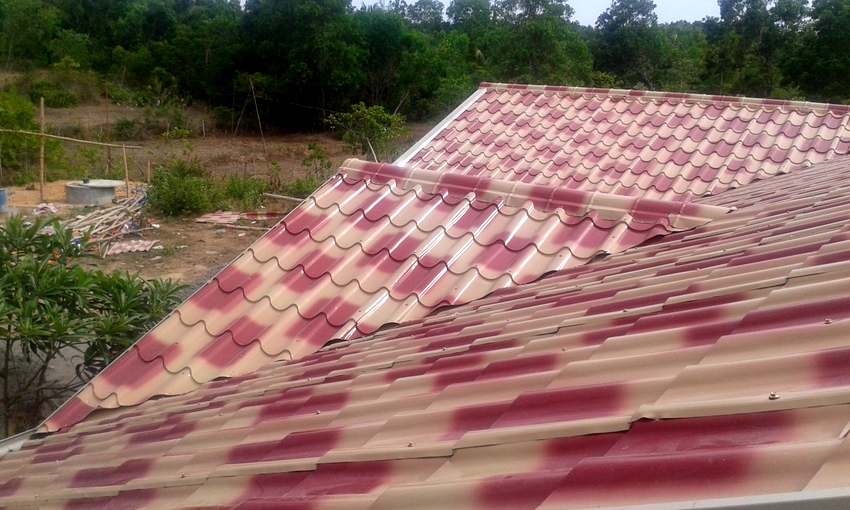 My asawa has borne the brunt of the stress associated with the building of our new home in the Philippines. My spouse handles the ordering of materials and takes care of the payroll and makes sure all of our workers have an ample snack supply on hand for their daily merienda. Regular readers know that I don’t do much of anything and excel in that function. But the other day, I had gotten fed up with the excuses of our roofers, and thus the “ugly american” found it necessary to make an appearance at our new construction site.

Our roof had been nearly completed a few weeks ago when my wife received word that four small sections of the roof were still needed to finish the gable section shown below. I was not overly concerned. The additional roofing was not going to cost us anything and we we were not going to pay the roofers in full until said gable was completed. 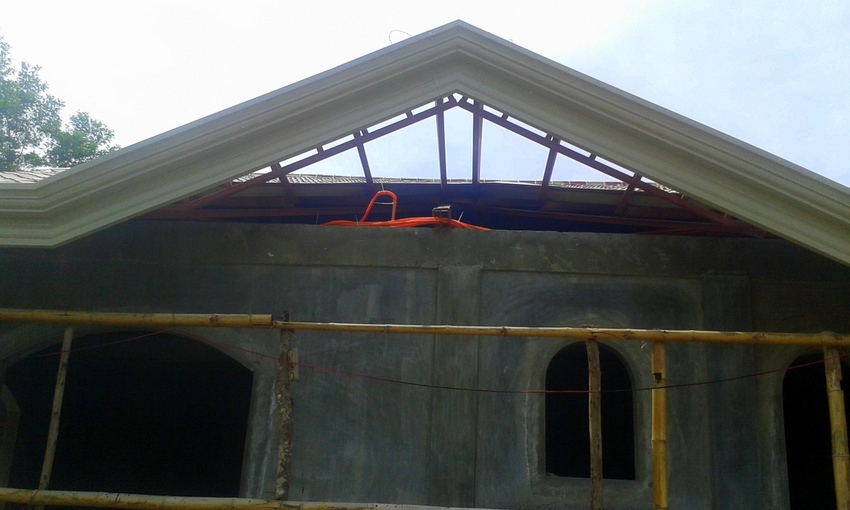 But on three separate occasions the crew did not show up the day they said they said they would. On the first missed date it was reported to my asawa that the foreman was sick. But the other day, when the workers missed their third scheduled date, I hit the roof.

We had arrived at the construction site and noticed the roofers had not shown up. My asawa called Jolex, the roofing company representative who had ordered our roof and who had recommended the crew that had installed most of our roof.

After my wife got off the phone, she informed me that Jolex had “scolded” the lead man and assured me that the workers would arrive the next day. I was fuming! I took the phone from my spouse and called Jolex.

“Jolex, I am tired of the [expletive deleted] excuses this crew are giving us! If the workers are not here tomorrow I will pay them HALF of what we owe them yet!” I said in an angry tone and loud enough that the workers at our site, and the whole neighborhood, could hear.

“They will be there, sir,” came the reply.

The crew arrived the next day and finished the job. My asawa and I will go to the site today to inspect the work and make the final payment to the roofers if all is in order. 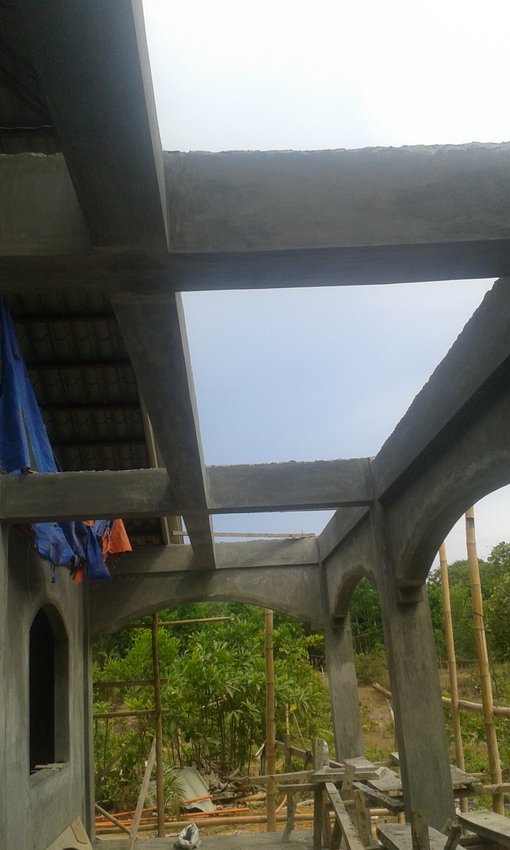 That matter aside, while at the site, I took the pictures seen in the remainder of this post. The above photo is an inside look at our new terrace that faces my father-in-law’s nipa hut.  My wife plans to hang plants from the concrete beams above. 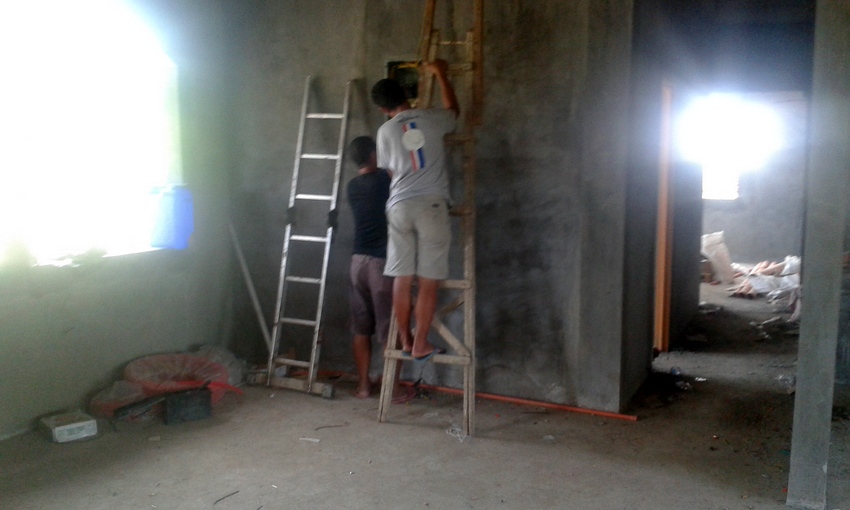 Our electricians, seen above, are finishing up their work. They’ve done quality work and will soon be adding motion-detector lighting to the front and rear of our new home in the Philippines. 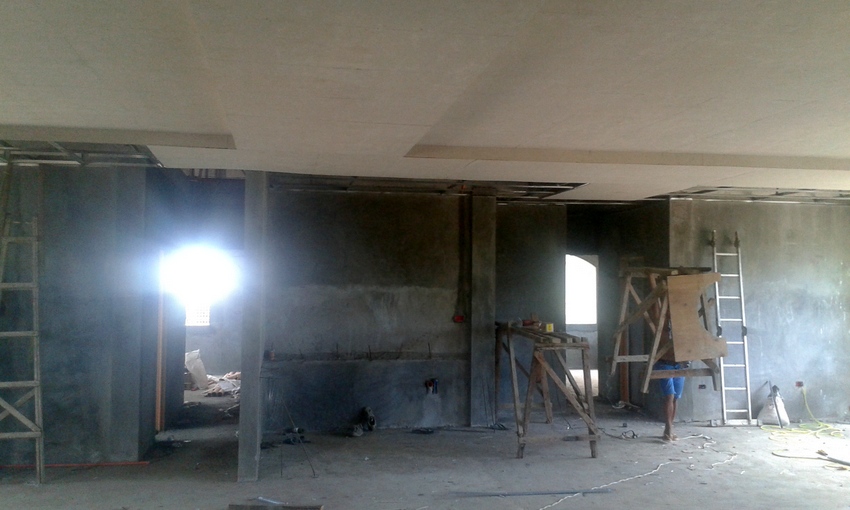 The ceiling crew has finished most of the living room/dining room/kitchen area. 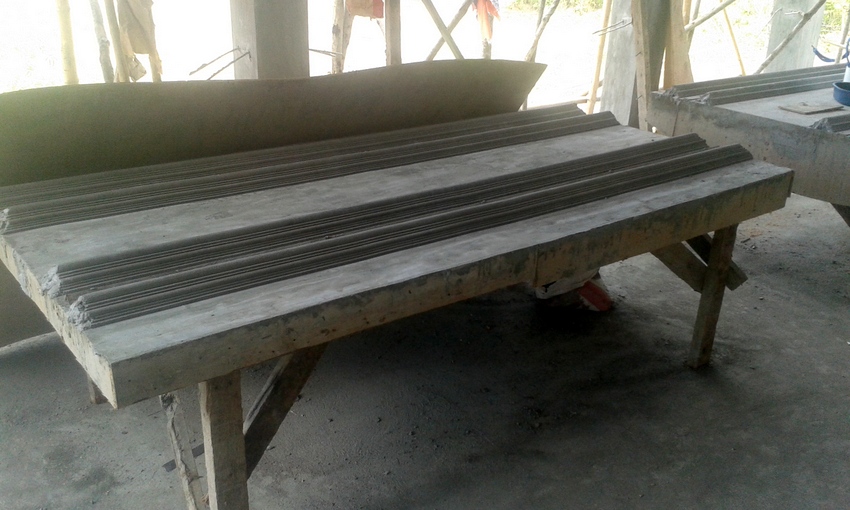 Our foreman, Boy, has been busy working on the concrete precast designs, seen in the pictures above and below, which will be installed outside of our windows and doors. 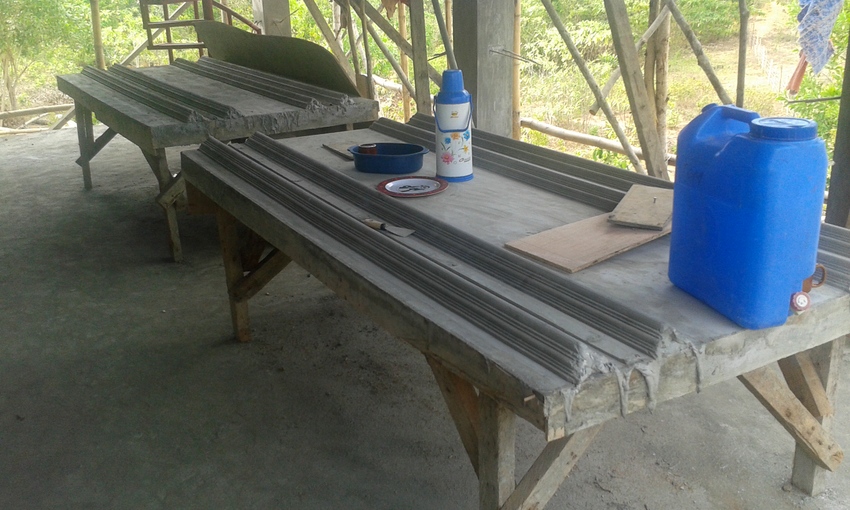 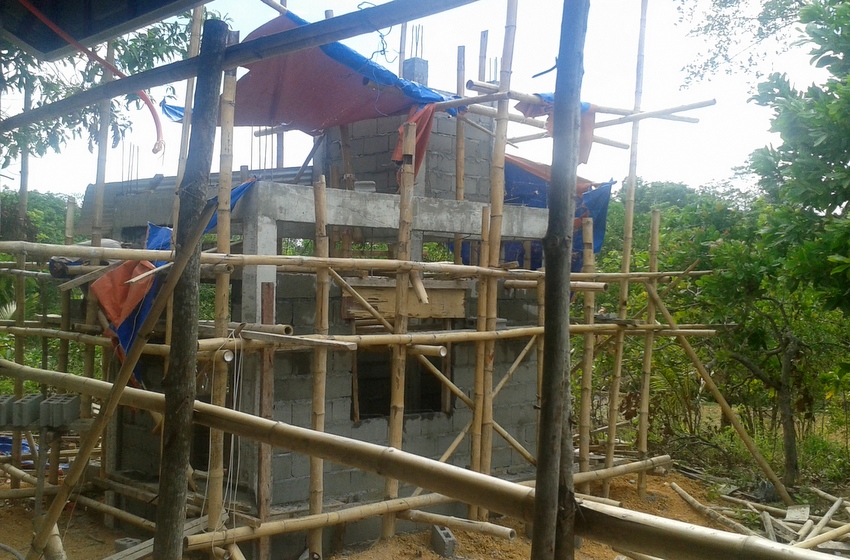 More hollow blocks are being added to the walls of our new dirty kitchen, seen above. 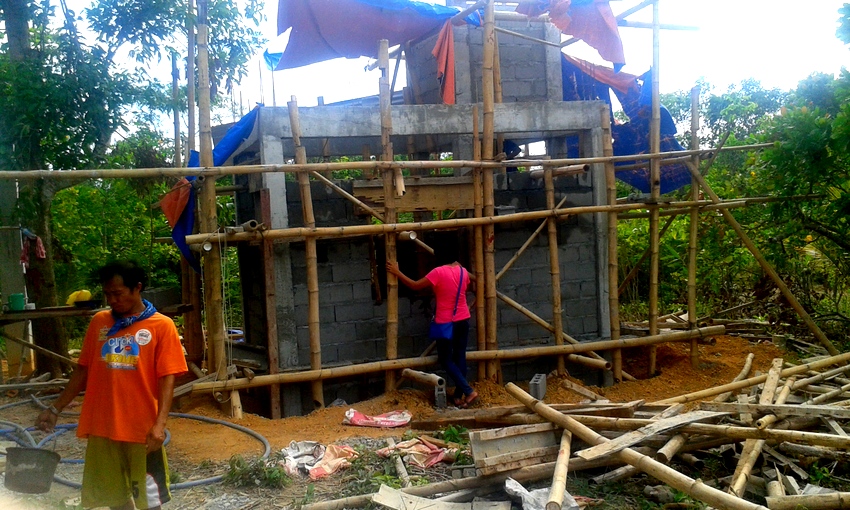 That’s crew member, Gerry, on the left, along with my asawa checking out the dirty kitchen. 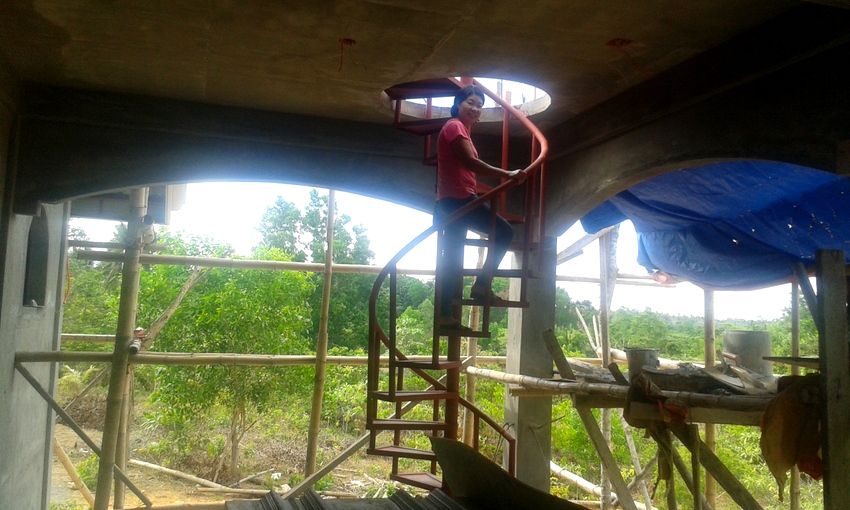 Here’s my lovely wife again, posing at the top of our new spiral staircase which leads to the terrace on the opposite end of the house from the other terrace. This terrace, with the staircase, is located on top of our garage. 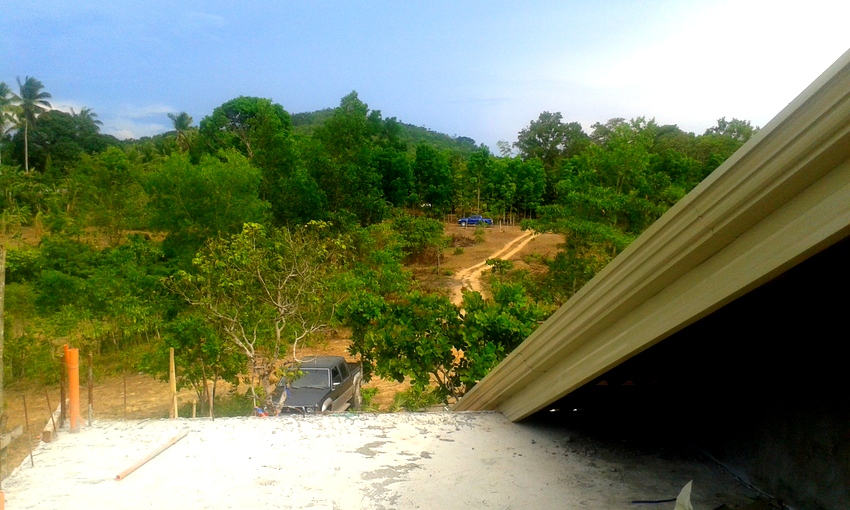 Surprisingly, I easily climbed the new staircase and checked out the view with my wife. That’s our Ford Ranger in the background. The electricians’ truck can see be seen in the foreground. 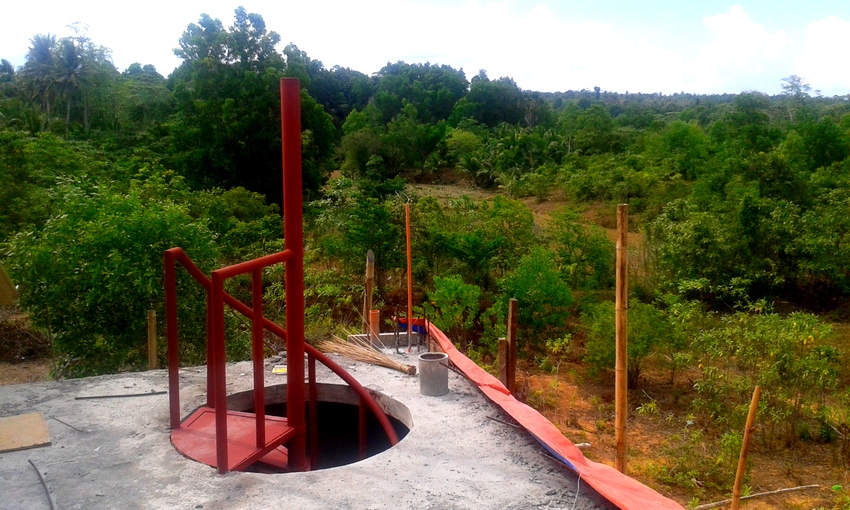 We will have rails installed around the perimeter of the terrace. There was a good breeze that afternoon and I’m looking forward to having a few cold bottles of San Miguel Pale Pilsen, once the terrace is completed. A few cold ones can always calm down this “ugly american.”