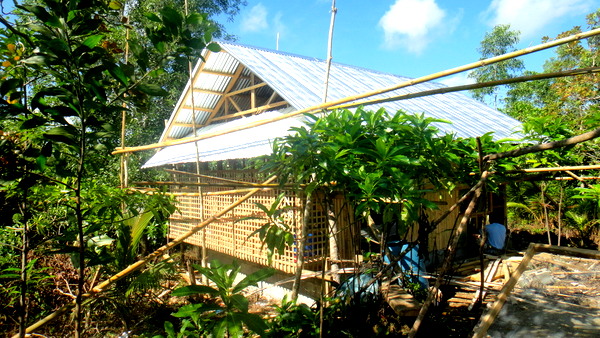 Lolo’s nipa hut in the Philippines nears completion. Foreman Joery, our brother-in-law, along with three other employees are hard at work underneath the blistering tropical sun. The exterior walls of my father-in-law’s new digs are almost done. The interior walls, consisting of plywood purchased from the New Guimaras Traders, will soon be installed. 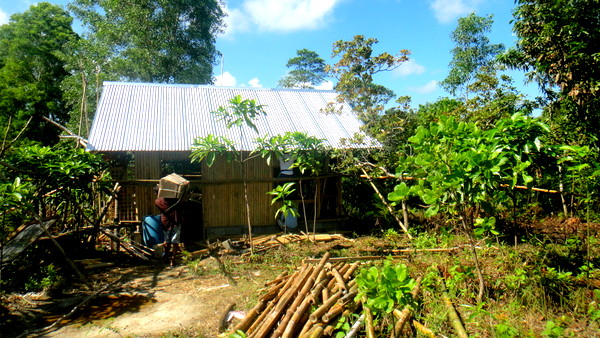 Recent Typhoon Ruby, which fortunately only dumped a steady rain on us this past Sunday, the crew’s day off,  did not slow down our laborers. The guys have only had one day, last week, which they could not work due to the weather. It’s been over three weeks since the men started construction of Lolo’s spacious flophouse and my asawa and I are both anxious for  our  own abode’s assembly to commence.

Here’s a glimpse of the bamboo lattice work which covers one entire wall. This is common in the nipa huts I’ve seen built on our island province of Guimaras and provides a good breezeway which help cools off the structure. 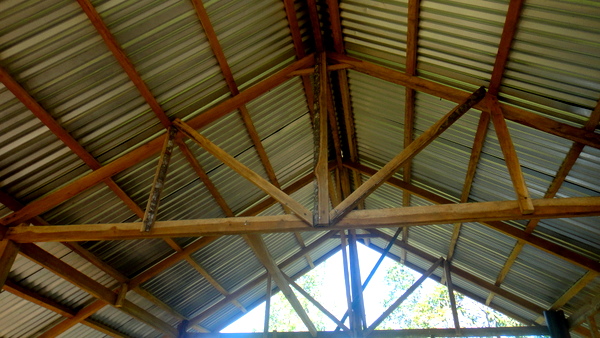 The view above shows the interior’s roof framework. A good deal of space is allowed between the roof and the living space below due to the heat that the metal roof generates. While insulation added to the roof’s interior can help cool the nipa hut, a heat-reflecting white roof paint could also be added. Currently, Lolo, who has a fan in his bedroom at “The Farm” where we now reside, he rarely uses it. He’s lived most of his 83 years without any electricity and has adapted. 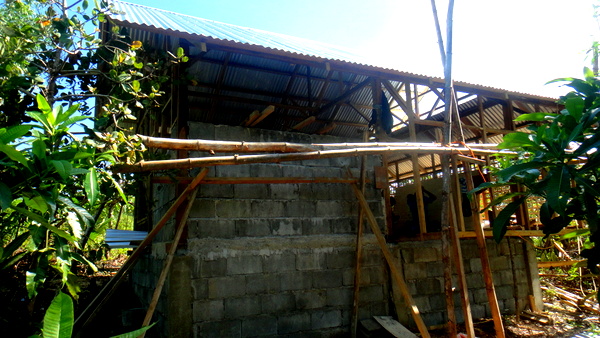 Let’s take a look-see at the hollow block wall. Only one side of the nipa hut will have a solid wall built from hollow blocks purchased from Cousin Emma’s Jade Market. The wall faces the new CR, Comfort Room, that is being manufactured for Lolo. The water tank and sink for the new restroom has already been purchased. Joery, who has plumbing skills along with his carpentry expertise, will install the CR fixtures, including a shower.

With the installation of the shower I will no longer be subjected to glimpses of my father-in-law’s skinny naked ass as our live-in domestic helper gives him a shower and doesn’t always close the door to the shower room. I’m afraid these unsettling images have scarred me for the rest of my life. 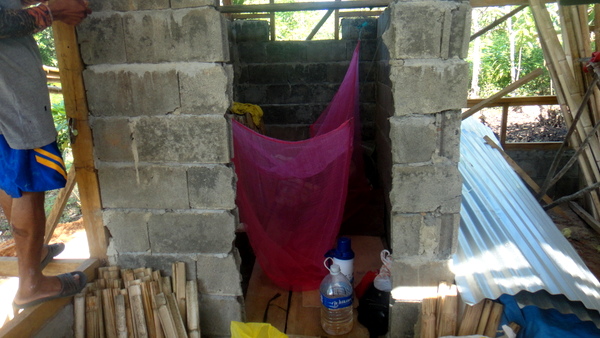 The new Comfort Room, with the pink mosquito net, is our caretaker’s Gerry, new bedroom. He has moved from the Native American tipi that was first put up on the new site.  Gerry, who is also a laborer on our day crew, provides security at night at our new property location in Guimaras, the Philippines. There is a nearby well on the property of the brother who sold us our lot, and he has generously given us permission to use the water from his well. The brother works overseas on a oil rig and no one else resides on his property at this time.

We will not dig a new well until March, months after the rainy season has ended. My spouse informs me that the dry months are the best ones to find a new water source, which makes sense to me. 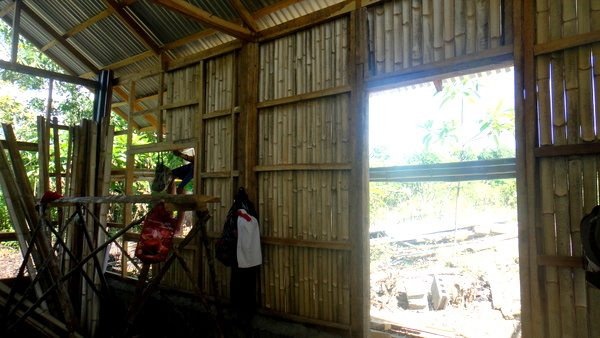 I’ll close this portion of the post, “Lolo’s Nipa Hut in the Philippines Nears Completion,” with a look at the front interior wall of the nipa hut. Note the split bamboo that is being used on the exterior walls. The hollow part of the bamboo faces the interior, which, as noted in the lead paragraph, will be covered with plywood.  Adding this feature takes more work but it provides an essential look to any nipa hut in the Philippines and with the abundance of bamboo in our province, makes for a relatively inexpensive wood to work with. More photos of the nipa hut and the property will be coming up in future posts.