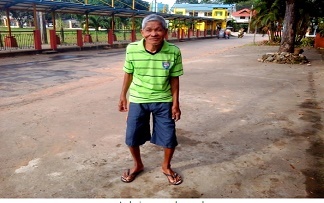 Lolo joins the fight club. My 82-year-old father-in-law has dementia. He lives with us. And occasionally the senior likes to spar with his son-in-law he calls “Domingo” since he can’t pronounce my real name, “Dave.” It’s OK, I’ve been called a lot worse. But the feisty fighter is getting on my nerves. 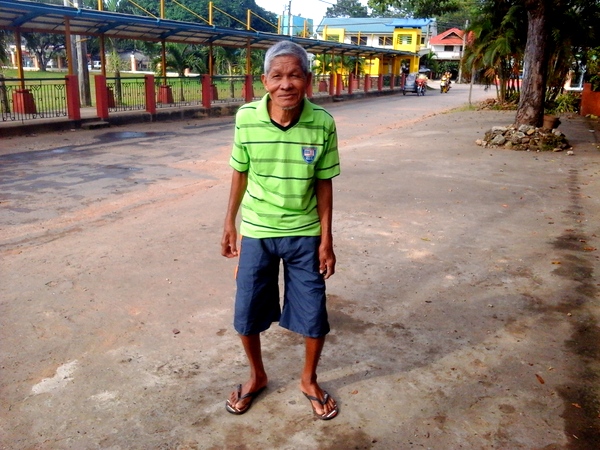 Lolo in a good mood

To be honest, since I’m a 62-year-old fart (thanks, Papa Duck) geezer myself, I can’t wait for us to start building our new home in Guimaras so we can get Lolo out of the house. The first thing built will be Lolo’s nipa hut. I figure we’ll place his joint FAR from our main living quarters since my father-in-law likes to loudly pray at 1 am and then continue his usual sing-song gibberish, which nobody can understand, for hours at a time.

When Lolo, Grandpa, gets done singing, he’ll converse with his friends. Some of them are dead relatives, some are still alive. One of the relatives still alive is Cousin Roberto. Cousin Roberto owes my father-in-law 9,000 pesos for a carabao the relative sold. That’s a lot of money we could use to buy diapers for the old guy.

Whenever I hear Roberto’s name at the dinner table I loudly ask Lolo if Roberto is going to pay him that money he owes him for the carabao. Lolo never responds to that.

My father-in-law tried to whack me across the head the other day with a piece of jalousie glass. A jalousie window, seen below, is made with a set of movable glass slats. When I opened his bedroom door one morning, he was standing up and holding one of the window slats like a baseball bat and was swinging it at me.

I loudly called for my wife. I wasn’t going to approach the old guy. This wasn’t some redneck bar where some drunken idiot is pointing a busted beer bottle at me. I can handle that. But for this,  I had to call on the “big guns.”

My wife quickly disarmed her father and calmed him down. I still don’t know what he was upset about, but he occasionally has random outbursts like this. 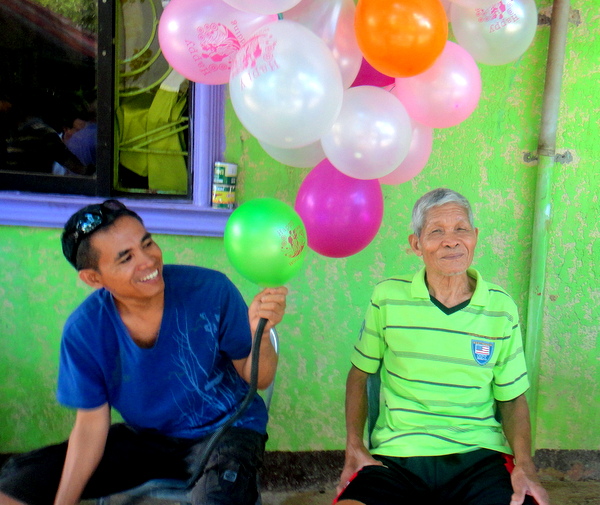 Brother-in-law Joery and a happy Lolo

A couple of days later Lolo was sitting on our back porch at “The Farm.” He used to keep busy sweeping the grounds in our front yard but when summer hit in April and May, we  had to take his broom away from him. It was just getting too hot and he was complaining about how hard we worked him. We never told him to sweep, my wife loudly advised him (since Lolo is almost deaf) and she was getting tired of hearing his belly aching. She gets enough of that from me.

Lunch time was over and my father-in-law was taking a snooze on the back porch bamboo bench. I walked outside to take a break from writing, and he suddenly woke up and grabbed a bamboo walking stick left behind by the former resident, The Tom Cat. We use it to chase off tukos trying to get into the house.

Before I could move out of the way, he rapped me across the knuckles on my right hand. My wife, who was nearby, and I,  wrested the bamboo rod from him and took him inside. My asawa applied a clump of ice cubes to my injured middle finger, the same one I occasionally raised on my daily commute back in the States.

I haven’t used that finger since a government van from Nueva Valencia in Guimaras almost sideswiped the tricycle my wife and I were riding on. The van got stopped at a construction  zone and we were behind it. It took all of my wife’s persuasion to stop me from getting out and having a conversation with the driver, but that middle finger sure got a workout.

Lolo hasn’t been too aggressive the past couple days, thankfully, and we keep him in locked in his bedroom at night. Not only to protect him but to protect someone else I’m very fond of…myself.