My asawa went to our local Generics Pharmacy in Guimaras a few weeks ago to buy me some pain medication. I’ve stopped by our local drug outlet on occasion to pick up various medicines for the family. Being a friendly American expat in the Philippines, for the most part, I usually chat with the locals when I go out in public. When my wife made her aforementioned run to the drug dealers and told the two  female employees working the counter  that she was getting the medication for her husband, they both remembered me and called me the fat Americano.

As a six feet tall, formerly 206 pound kano, I certainly qualified for that remark. But I’m not surprised the pill pushers called me fat. I think it’s part of the culture. My wife used to call her Filipino friends in the States fat. When I asked my asawa if her friends were offended, she said “no,” everyone does that.

Female members of our family call our niece, Michelle, fat.

Michelle has been staying at “The Compound,” my wife’s estate in Guimaras where her sister has a preschool that our niece teaches at. Occasionally Michelle doesn’t like the fish Joery, my brother-in-law, is preparing that day so she gulps down junk food from Joery’s sari sari store located at the front of the property and washes it down with a Coke.

I have sense enough not to call any female fat, at least not to their face. I recall a Hallmark Shoebox Greeting card I once read. It depicted a male dinosaur conversing with a female dinosaur who was wearing a white dress with polka dots. The female asked:  “Do I look fat in this dress?”  The male responded in the affirmative.

I opened the card. The male dinosaur was knocked out, sprawled on the ground with this caption underneath: “The reason dinosaurs are extinct.”

Me? I am old enough to have accumulated enough wisdom to ALWAYS respond to my spouse when she announces that she is getting fat with this remark: “No, you’re not getting fat, Sweetie.”

I keep it simple. Straight and to the point and don’t add anything else to it that somehow could possibly be misconstrued.

But after my recent health scare I’ve been eating healthy and I don’t particularly enjoy that. I have to cut down on fast food.  For example, my wife and I went to SM City in Iloilo yesterday. SM City, a mecca of fast food joints like McDonald’s (where my wife was served a hair with her McSpaghetti recently; the joint is closed down now for remodeling.) 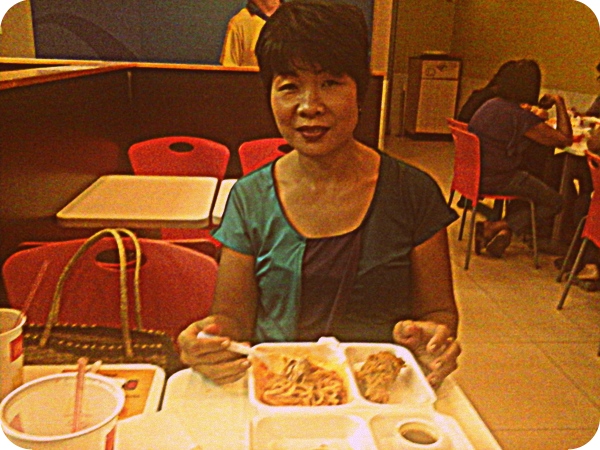 (Here’s a shot of the McDonald’s meal without the hair. I complained to management and insisted that they don’t just remove the hair and try to serve my wife the same dish. They said they wouldn’t do that. I didn’t watch to make sure. They could of spit in it for all I know but I wasn’t the one eating it.)

My asawa suggested we eat at Max’s Restaurant:  “The house that fried chicken built.”

I exclaimed to her: “Why are we eating at a place that was built on fried chicken?  I’m not supposed to eat any fried food!”

She assured me that the all the chicken is not fried. I remarked that I believe it is all fried and I would choose something else on the menu other than chicken.

I scoured the menu. I was right. Regardless,  the waiter still tried to push Chicken Sisig on me. No, the menu itself stated it was made with fried chicken.

I settled for Chop Suey with pork. The menu claimed it served two to three people. Two to three what? Duwendes? I gobbled down the  dish in five seconds; it was composed of 99.99% bland vegetables and bits of pork that could only be seen with the aid of an electron microscope. I washed down this banquet with a bottle of water. Yippee.

My wife chowed down on, you guessed it, fried chicken.

But I’ve lost eight pounds in about two weeks. I’n down to 198, the first time I’ve been under 200 pounds for years. I walk an hour every morning (when it’s not raining.) I don’t drink any more soft drinks. To add insult to injury I had a tasteless mango and banana smoothie without sugar  at the mall yesterday, the perfect accompaniment to my dull as dishwater Chop Suey.

But my sister-in-law, who was visiting us at “The Farm” last night,  remarked to my wife that I had lost weight. The Generic Pharmacy technicians called me the “fat Americano.”  That probably is what my sister-in-law used to think but was too polite to tell me to my face. But I’m not quite as gargantuan as I once was and plan to get down to 185 pounds. I really don’t want to be known at the fat American anymore.