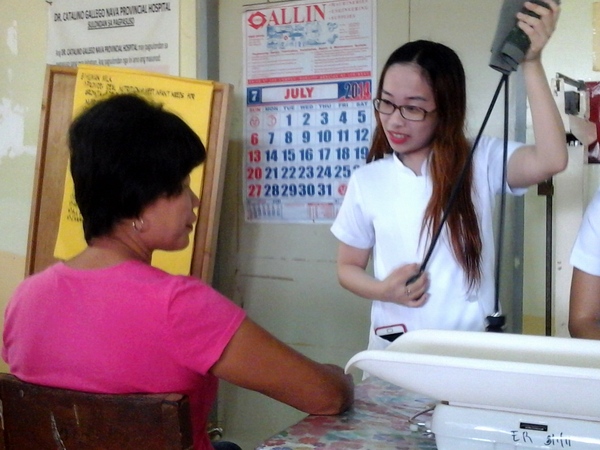 While waiting at the Guimaras Provincial Hospital for over four hours last week, I had plenty of time to take some candid shots with my Samsung Galaxy Tablet and include these pictures in my outtakes at outpatient services. Even though I’ve been in the Philippines for over five years now, I still have a problem waiting for any long period of time. And to me, sticking around over four hours to see a doctor fits that category. But since the visit was free, I didn’t complain that much until the last hour.

My asawa and I arrived early at the outpatient services registration door, around 7:15 am this past Thursday. Since we already had our medical cards that the hospital requires, we thought we would get an early number to see the doctor. We both were there for follow-up visits from the previous week. There were only about ten people when we arrived, many of them with children in tow, but it wasn’t long before more mortals moseyed on over, as shown in the next picture. I don’t know what everyone was looking at. I checked my barn door. OK, good, it was zipped up. Did I have spinach in my teeth or toilet paper hanging down my pants leg? Nope, clear on both those counts. And since this transpired several days ago, I have no idea what distracted the attention of these folks. 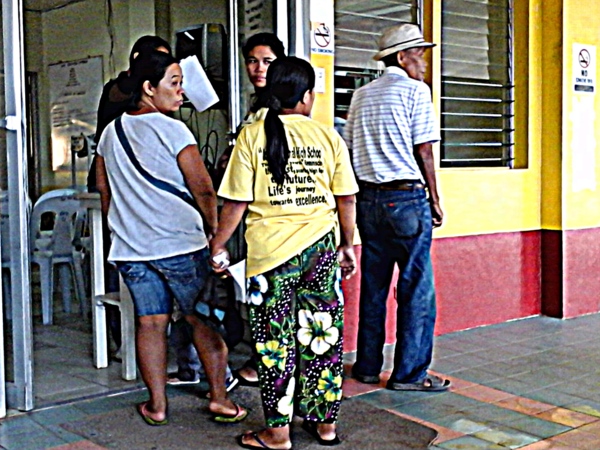 We quickly noted that the outpatient services section would not open until 8 am. Factor in “Filipino Time, “ and it might not be until 9 or 9:30 until we get in.  We were second in line, thanks to me stepping up as soon as the registration window opened, and received, a number two card. My hopes soared as visions of getting out early danced through my head. I was called before my wife to have my blood pressure taken. That’s her in the lead photo along with the nurse wearing the specs. My blood pressure was higher that day, 137/92, which I was told was “borderline” for someone my age. “Someone my age? This nurse is calling me old,” as I addressed my wife sitting in the front row in the waiting room. “Well, I guess you’re right, “ I told the nurse, “I am old, I’m 62.” This is the moment when you want to hear someone respond with “you don’t look that old, sir!,” but there was no reply from the bespectacled caregiver. I had to face facts. I am an old geezer. 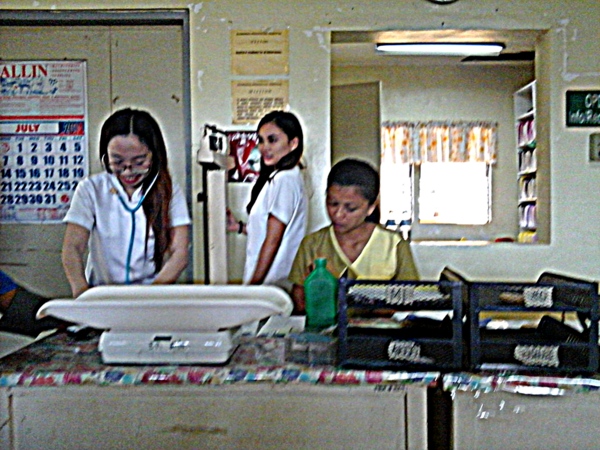 After leaving the main outpatient waiting room, we made our way to the hallway outside of the offices where the doctors on duty would talk to us. These are no examination room we are led into. It’s an area with a few desks where the physicians will simply look at our medical records, we will voice our concerns, the doctor will respond, throw out some advice and a prescription or two. I knew the drill, having been there last week. But as I mentioned earlier, there is no charge for this, so I didn’t mind waiting until the wait turned into hours. 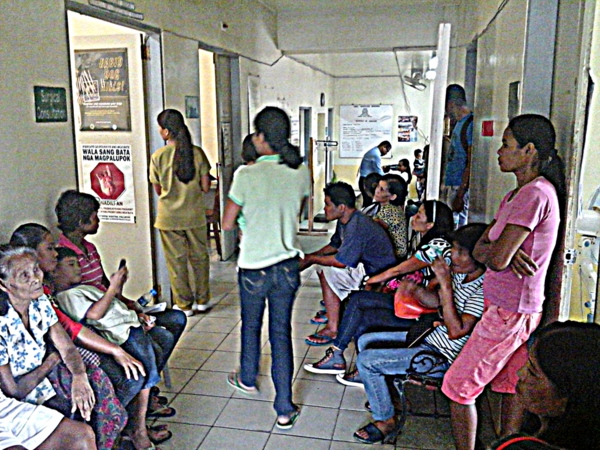 I knew we were headed for trouble when my wife told me the doctor, who was running late, would not be in until 10. So much for getting that early number. There must have been a total of 50 or 60 people up and down the hallway but at least the physician that was there for the children had already arrived and was taking patients. Our number two meant absolutely nothing, but I wasn’t in any pain and was glad to see at least the kids were getting some kind of treatment. Ten o’clock came and went. One of the nurses bravely walked through the throng of people still waiting and a person spoke up: “When is the doctor coming? “He’s on his way! the nurse responded. On his way? I loudly repeated,“in the Philippines that could be a few hours yet!” That drew a huge laugh from the crowd. 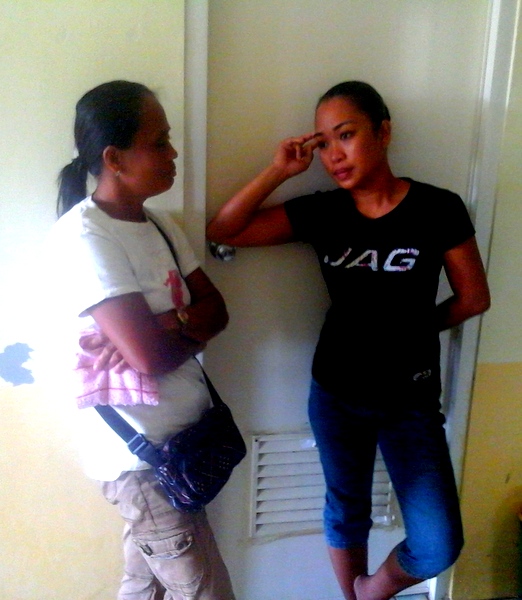 So I killed some more time and waited and took more pictures. I recognized the young Filipina in the picture above, as someone whose photo I had taken during the 2010 Manggahan Festival,  alongside her mother, as shown in the next shot.

Now here’s her mother, who I recognized first, shown on the left, waiting to see the doctor, also. I spotted the Mom right away, as I had also seen her grilling at this year’s Manggahan. Her daughter is standing next to her in the picture after next, though the light wasn’t good enough for me to get a clear photo with my tablet. 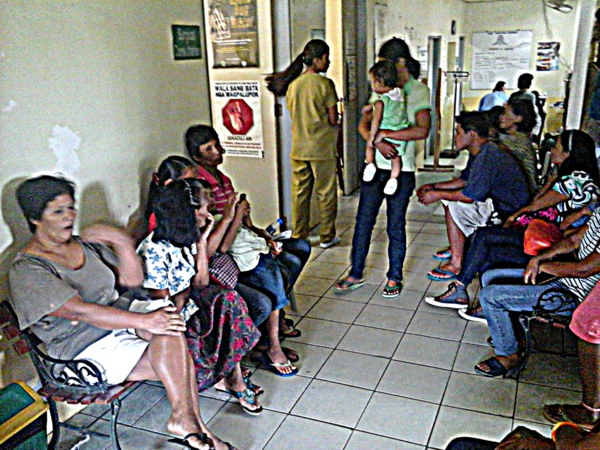 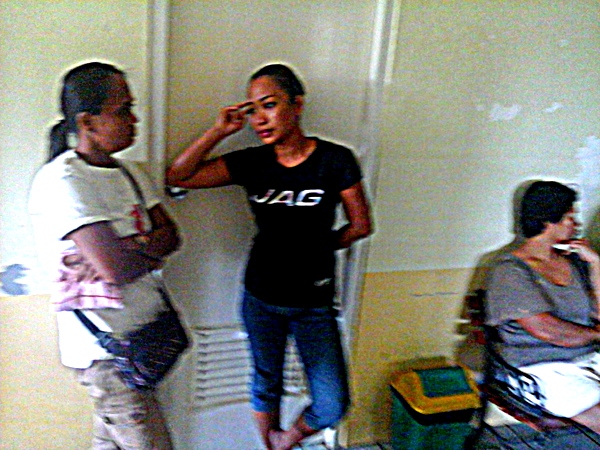 As 11:00 came around, I had lost what little patience I had left, and went up to the nurse’s station to get my medical records. I had enough and advised my wife I would stay until the doctor arrived but never would return to this hospital again. “They will only give you a copy of your records,” my wife told me. “No,” I firmly replied, “they will give me ALL the original records! A few minutes passed and I saw one of the older nurses come up to the station and speak to the nurse that had taken my blood pressure. The caregiver with the glasses pointed down the hallway at me, with records in hand. I walked over and politely took the records that were handed to me and asked: “So when is the doctor coming?” “The doctor is here now,” announced a man with shaven head and glasses who had just briskly walked in, “the other doctor could not make it today and I am taking his place. “Thanks, doctor,” I said, as I put his arm around his shoulder.

A few minutes later, I was called in. Details of the results of my conversation with the doctor can be found in my previous post. As I wound up my session with the physician, I advised the doctor that my wife and I had the same number, and also had her results for a stomach disorder for the doctor to look at.

The practitioner waved away another patient that was approaching his desk, and looked at my wife’s test, asked a few questions, and  my asawa answered that she had been feeling good with the medication prescribed for her last week. “Don’t eat any raw seafood,” he advised her, and I ratted out my asawa and told the doc she often eats half-cooked oysters at Lisa”s Talabahan. “No more. Always have them cooked all the way now ” he said. I replied that I would make sure she would.

I thanked the doctor and we were on our way. Over four hours of waiting for outpatient services but five years ago when we first moved to the Philippines, I would have lucky to stick around for an hour before taking off. Maybe I’ve become a little more patient but don’t ask my wife. She might not agree with that statement.