Overloaded jeepneys with school kids riding on top of them is no problem on Guimaras province where my asawa and I reside. In fact, the public utility vehicles even pass by the local Philippine National Police without even a second glance. There are laws on the books regarding this issue, but like many rules and regulations in the Philippines, they are often ignored and not enforced. 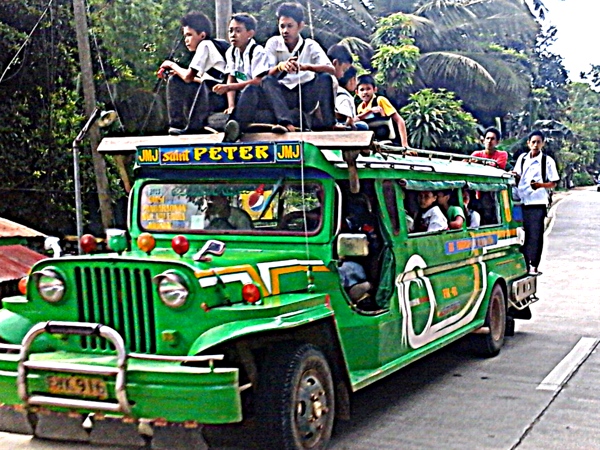 But after almost five years in “paradise,” nothing surprises me anymore. While waiting for my asawa to purchase a new rain barrel, I counted four guys in 15 minutes taking a pee in public. Peeing in public in the Philippines, at least on Guimaras province, is as common in this archipelago as motorcyclists without helmets, driving without headlights in the middle of the night, and well, overloaded jeepneys. You roll your eyes, stifle a laugh, or simply shake your head in amusement or disgust.

But since I have Libertarianism leanings and believe in as little government, any government’s, intervention in my life, these flagrant safety violations do not concern me that much. The kids riding the top of these jeepneys are experts at this and unless you’ve had one too many bottle of Red Horse, they all probably will get home without incident.

At 62 years of age, I’ve never attempted to ride on an overloaded jeepney’s roof. My asawa would NEVER allow it. And I doubt that I could make the climb to the roof anyway. But, I have, however, ridden on the rear of a jeepney,  just outside the rear entrance like you see the students in the following picture doing.

And, I have, done this, after one too many bottles of alcoholic beverages. My spouse is not particularly fond of this behavior and since moving back to Guimaras province from Iloilo last year, I haven’t pulled this stunt again. 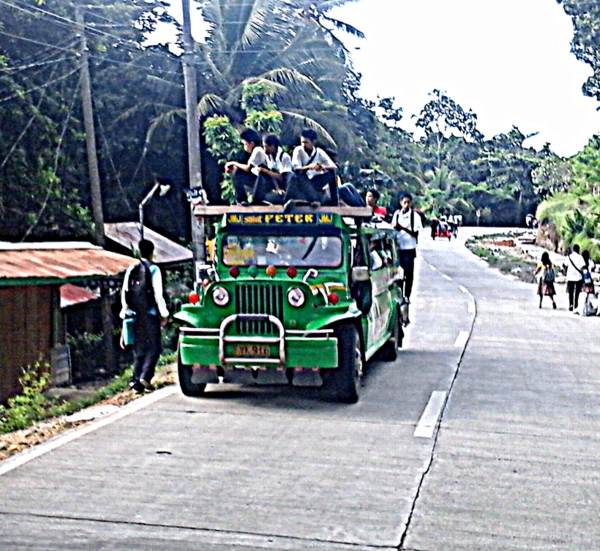 I took the pictures for this post with my Samsung Galaxy Tablet as my wife and I rode in a multi-cab from Jordan Wharf in Guimaras after a shopping trip in Iloilo City. We had too much stuff to haul back on a jeepney so we rented the cab. While we were whizzing along, my wife exclaimed: “That’s your friend!”

And it indeed it was, my SPO3 amigo from the local branch of the Philippine National Police. I had even captured his image as he stood along the road as school had let out for the day with the overloaded jeepney featured in this post speeding by him. I decided not to publish that photo, but will politely ask him about the overloaded jeepneys next time I see him over at “The Crossing” in San Miguel, Jordan, Guimaras. 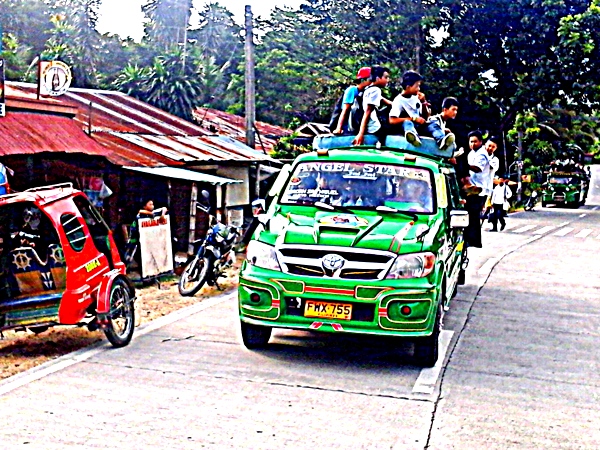 But I’ve never seen any of the school girls riding on top of the jeepneys and these poor girls pictured below had to walk home. I hope it was a short walk since the sun was brutally hot that afternoon. Even a jeepney ride on the roof would have been better a better alternative than walking. 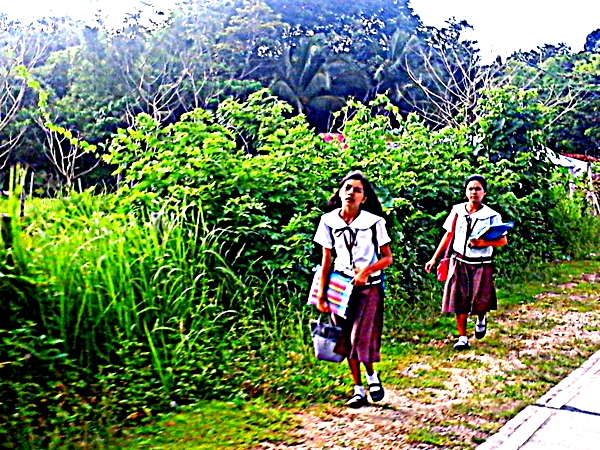 3 thoughts on “Overloaded Jeepneys with School Kids Riding on Top: No Problem in Guimaras Province”