Not Exactly a Rockin’ New Year’s Eve in the Philippines

As evidenced by the lead photo of Lolo (Grandpa) fast asleep, it was not exactly a Rockin’ New Year’s Eve in the Philippines. After the arrival of my asawa’s brother from Metro Manila to retrieve his Baptismal Certificate in Guimaras, the home province of the clan, our initial plans to usher in the New Year at “The Farm” were scuttled. 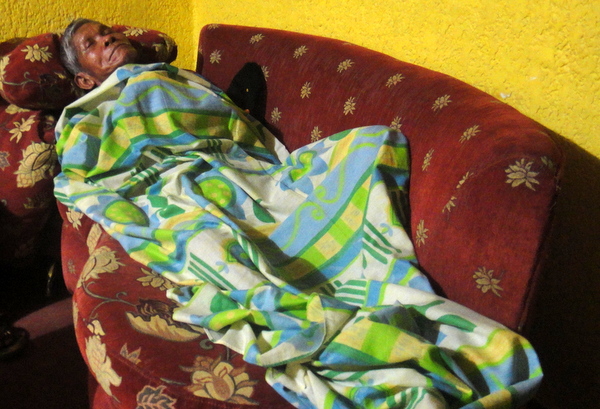 Brother-in-law, Flores, seen in the next picture seated next to yours truly, The Kano, hadn’t been in Guimaras for years. He needed his baptismal certificate in order to apply for his Social Security in a few years. 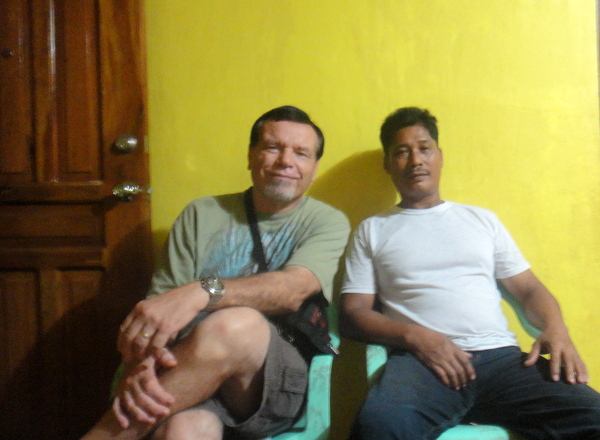 Flores looks younger than his 57 years of age and is quite a personable guy. He’s close to my height of six feet and keeps in shape by sorting mail at the messenger service he works at in Manila.

My brother-in-law’s last visit to the mango province was over six years ago when he fled Manila after being charged with “frustrated murder” over a dispute with a neighbor over tubig (water.)

Eventually Flores returned back to Manila and eluded authorities over five years until a chance sighting by an in-law, who turned him into police.

After my mother-in-law and my wife each sold a carabao, the family was able to raise the P24,000, 545 US Dollars,  to spring Flores out of jail. Flores tells me the case was settled for P40,000, about 900 USD, and he doesn’t have to worry about serving any more time for his offense.

So instead of spending a quiet evening at “The Farm,” we hopped on a trike driven by our favorite local driver, “No No” and headed to my wife’s house and lot at “The Compound.”

After last year’s noisy celebration at Savannah Subdivision in Iloilo, I was looking forward to ushering in the New Year at our more peaceful new residence.

Guimaras, a rural island province of around 153,000 people, is extremely quieter than the big city of Iloilo on nearby Panay Island. After some trouble with a subdivision neighbor during New Year’s Eve 2012 festivities (who since has been arrested by the National Bureau of Investigation, NBI, of the Philippines), I welcomed a less noisy celebration this year.

But Flores wanted to rent a karaoke machine and have everyone come over to “The Compound.” My wife relented since her brother, the eldest sibling of the family, hadn’t been home in years.

We started singing around 5 pm. My brother-in-law offered me a beer which I politely refused. After drinking way too much Red Horse at a recent birthday bash at Cousin Emma’s, I had no desire at all for a taste of alcohol in any form. 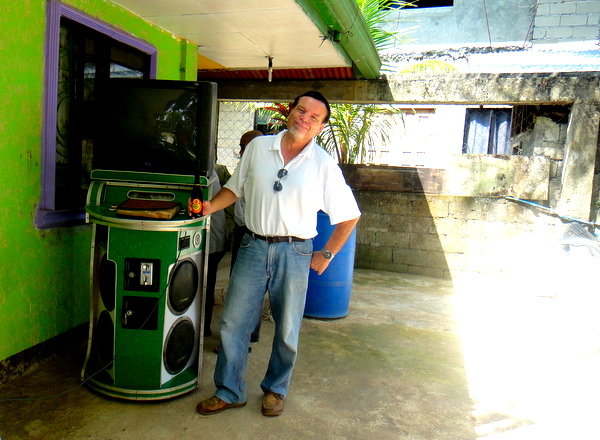 (Flores rented the same karaoke machine that was used at a recent birthday bash at Cousin Emma’s joint. Here’s that same picture of me standing next to the karaoke with my bottle of Red Horse.)

After an hour of karaoke, it started to drizzle. The karaoke machine was perched outside underneath my brother-in-law, Joery’s, sari sari store located in the front yard of “The Compound.” Joery’s television, perched on top of the karaoke machine, served as the monitor.

After the drizzle transformed into rain, Flores and my asawa set up a tarp with the help of my mother-in-law. I sat and watched. A recent cold had sapped me of any extra energy. Besides, I already knew that if my spouse was on the job, she had the tarp situation under control. I would get in the way if I tried to assist.

We sang a few more songs under the tarp. I pulled out my usual karaoke fare, “Paint it Black,” by the Rolling Stones, “I, Who Have Nothing,” by Tom Jones, “I Started a Joke,” an early Bee Gees classic before the group got involved in that disco crap.

Then the downpour started! I retreated to “The Compound’s” sala, living room, where Lolo was fast asleep. The noise and the fact that the lights were turned on, didn’t disturb him one bit. Only the “cold” coming in front the front door. I was warm. A compromise was reached. The door was kept open and my father-in-law was given a blanket.

After my spouse and her brother began covering the karaoke machine to protect it from the hard rain blowing in underneath the roof of my brother-in-law’s sari sari store, my wife came into the living room with some extremely bad news. Joery, who had gone to a New Year’s Eve Mass with the family at Saint Michael the Arch Angel’s Catholic Church, would not be happy when he heard the news. 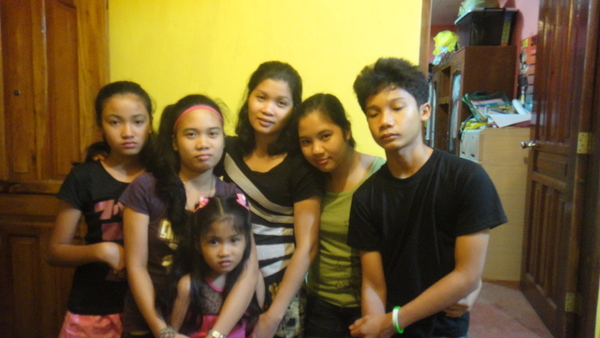 (“The Compound” Crew had gone to church. Papa Joery would get some bad news upon his return. Hopefully, he was “prayed up.”)