Cousin Emma was the only child of Juminda G. Galve. Though Emma’s Nanay (Mother) was born a member of the Gange Clan, with hundreds,  if not thousands,  of my asawa’s family scattered throughout the mango province of Guimaras, her tombstone does not bear the family name. Nanay never married. Emma was an only child. 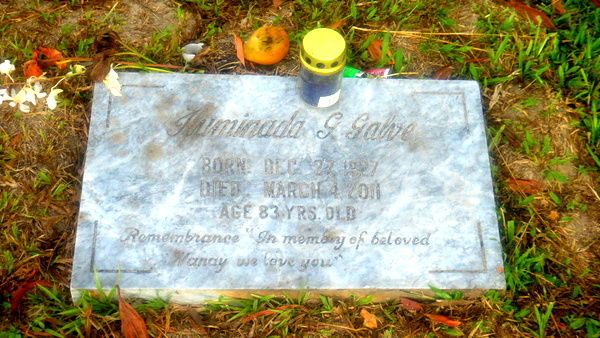 My spouse passed over her aunt’s gravestone when we visited Guimaras Gardens Memorial Park some time ago as she was looking for the Gange name on the marker.

We eventually found the marker and knew where to go for the Memorial Mass in honor of Nanay’s birthday. The explanation for the Gange name omission from the tombstone is too involved to be explained. But since Nanay has already been passed away for over two years, I doubt that it really mattered at this point.

Mass was to start at 9:00 am. But knowing how well Filipino Time is ingrained in the culture of the Philippines, I did not expect the service to start on time. I wasn’t disappointed.

Father Losada (see above picture) was only 35 minutes late. The personable priest, now stationed in Nueva Valencia in Guimaras, married my wife and me at a ceremony at Saint Michael the ArchAngel’s Church in San Miguel, Jordan, Guimaras. 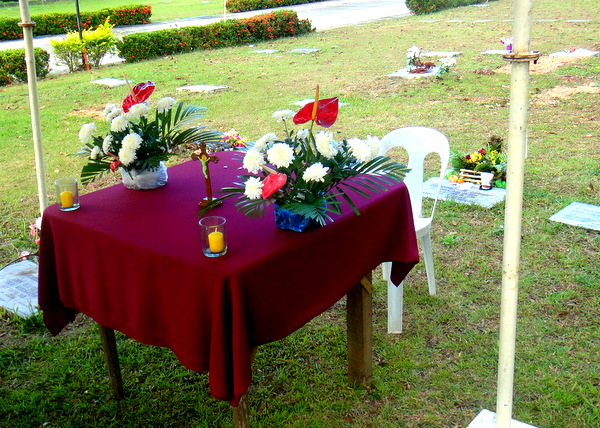 A tent was set up in advance along with flowers and the mandatory candles seen at every Catholic Mass. Here’s a look at some of the relatives and friends, including my own asawa standing next to her in the next shot. 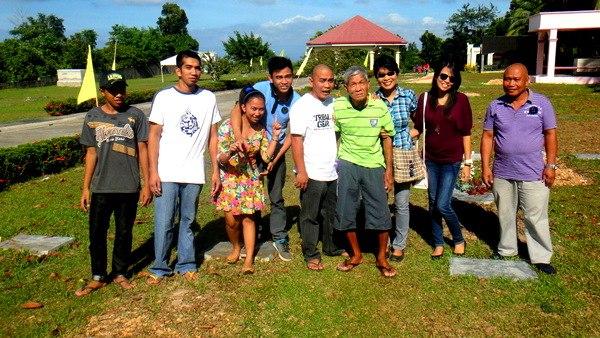 Cousin Emma dearly loved her Mother; my own father-in-law, Lolo, was her younger brother. Lolo sold tuba (coconut blossom wine) at the age of seven to help the family eke out a living. Times were tough; both parents died at an early age.  To this day, Emma is very close to my father-in-law and is appreciative of the help he gave her Mother and her during the lean years.

Nanay eventually became blind but was well cared for by her daughter. Though the Memorial Mass was conducted in the local language of Ilonggo, I could tell when Father mentioned Nanay’s name as the relatives and friends in attendance would smile, nod their heads and even laugh.

It was a brief service and would be followed by a birthday party celebration for the dearly departed Nanay at the home of her daughter and son-in-law. There would be plenty of food and drink at the celebration and I was glad my wife and I were invited. I declined a ride in Cousin Emma’s newly purchased van, shown in the next photo, and opted for a ride in the back of the family jeep, standing up with the other guys headed for the birthday bash. 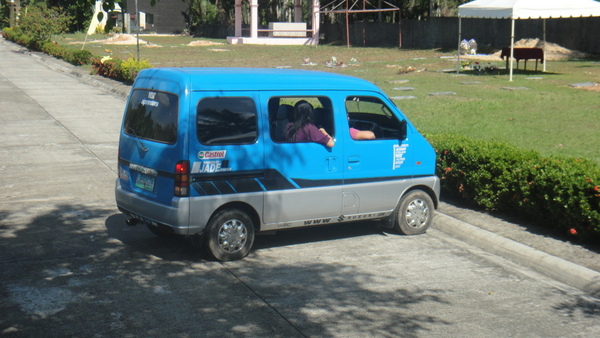 Cousin Emma’s husband, Danit, was at the wheel, and it didn’t take us long to arrive at his home to begin the celebration to honor Nanay. By all that my wife has told me, her life was truly one to be celebrated and fondly remembered.