It was Card Day at Santa Teresa High School in Guimaras. My niece DenDen, who lives at my asawa's home at “The Compound.” Our niece Shaina, and nephew Sharwin, who reside with us at “The Farm,” also attend this educational facility. 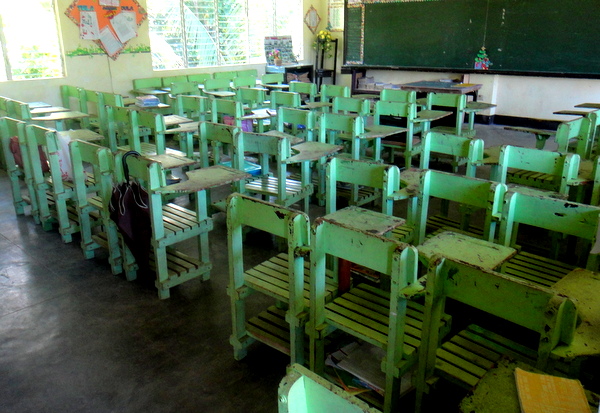 Since my asawa, who attended Santa Teresa a few decades ago, had to keep a close eye on Lolo (Grandpa), her father, I was appointed the designated signer of the report card for our niece and nephew.

I had visited the school earlier, along with my spouse, to enroll the kids in the high school, as they had to transfer from Iloilo City, where we formerly resided for two years.

The teachers required a parent or guardian to sign the report cards at Santa Teresa High School. The cards could not be returned home. My asawa informed me that I would also have to stay for a lecture from each instructor. What else did I have to do? I'm a retired American expat that's been living in the Philippines for over four years. Since I don't have an internet connection at our new adobe, I have plenty of time on my hands.

I took a trike from San Miguel to Santa Teresa (11 pesos.) Only about a 10 minute ride. I rode on back of the motorcycle behind another passenger who was seated right behind the trike driver. The tricycle was already full with people in the front and rear compartment. No one had to ride on top, however, a common sight in our rural province of Guimaras.

I arrived 40 minutes early. No one challenged my entry to the school. I did not even see one security guard on the premises. I freely walked about and tried to locate the classrooms of my niece and nephew. I took the following photo of a bunch of stacked up, worn and battered desks.

Having no luck with finding Sharwin or Shaina’s classrooms, I stopped for a 10 peso bottle of Coke at a canteen on the school grounds and asked for directions. Gulped down my Coke on that hot day and headed for my nephew’s classroom first.

I still had 30 minutes until I had to report. 1:00 pm was the starting time. There was another parent waiting outside so I stood around and waited. I took the following picture of some students setting up the baselines for their baseball field. It was the first baseball field I had seen since my arrival in the Philippines. 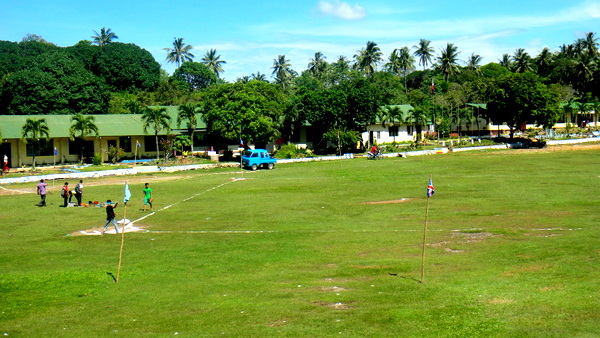 A few more parents arrived and at 12:45, my nephew's teacher arrived and invited me to take a seat inside the classroom. With a little difficulty, I managed to squeeze into the seat. The desks were clearly not designed for a 6', 205 lb, aging Americano.

Sharwin's teacher passed out the report cards. As usual, my nephew's grades were only average. His lowest score was in English, a “77.” I remarked to the instructor that I know my nephew can do better; he just needs to study harder. He doesn't apply himself and only has one year of high school left after this.

His teacher agreed with me and asked if I had time to stay for the “lecture,” a new group of regulations the high school in Guimaras were going to begin enforcing. I agreed. Though I would be late for the start of my niece's 1:00 session, I wanted to hear what the teacher had to say.

Regulations #1 and #2 had to do with the uniform code and how that it was going to be strictly enforced. I thought our niece and nephew adhered to the dress code and wore the proper school uniform. The P.E. uniform, to be worn on Friday's, had to now include the name of the high school to help keep outsiders from entering the premises. For 20 pesos, the school could print the school name on the shirts.

I remarked to the teacher that I had entered the school without seeing one security guard and no one stopped me from coming in. She informed me that they had three security personnel on duty. Maybe they had all been on lunch.

The third, and final proposal, was unsettling. It seems that some of the students leave the school grounds during lunch and don't come back to class. The Guimaras H.S. students hang out at the local sari sari stores or Internet cafes during school hours.

The sari sari stores sell the students alcohol and cigarettes, knowing full well they are selling to minors and that this is prohibited by law. This is a common practice in Guimaras and Iloilo, where we recently moved, and Guimaras.

“Why doesn't the school go in and take the students out?” I asked my nephew's teacher.

“Oh, Guimaras is very child friendly. We don't want to violate the children's rights,” was her surprising reply.

“What!” I exclaimed, astounded. “How does making the kids get an education violate their rights?”

“That is what the new regulation is going to try and do. Ask the sari sari stores not to sell cigarettes and liquor to the students and ask the owners to return the children to school.” was my answer.

But that was not an option. I later asked my niece Shaina's instructor about this; she told me that the school would be “trespassing” if they removed their students from the sari sari stores. I was shocked.

I'll have to follow up on the progress of this third regulation when I return to check on my niece and nephew's progress in school. Shaina's grades fell from being first in her section in Iloilo to average. I was disappointed and informed her instructor that my niece was quite capable of doing much better.

Her teacher agreed but said 25% of the students' grades depend on class participation. Shaina is always silent and never participates. I called my niece over and discussed the situation with her in front of her teacher. I promised her instructor that Shaina would begin participating and I would be back to follow up. 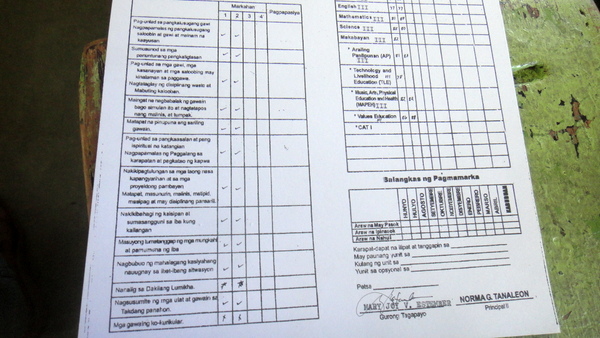 This is my niece's final year of high school. She'll be 16 at the end of this November and will graduate in early April of next year. Her mother, a domestic helper in Kuwait, wants her daughter to attend university in Iloilo, but frankly, my niece needs to pick up the pace and start applying herself.

Shaina intends to study “Business Administration.” With unemployment so high in the Philippines, it's not unrealistic to think that some day she might have to join the ranks of the over 10 million OFW's, Overseas Filipino Workers in order to make a decent salary. Only time will tell.

In the meantime I'll be making sure she finishes the school year to the best of her ability and check on how successful the school is in keeping their pupils out of the local sari sari stores during school hours. I’m hoping the school starts to crack down on this practice and make sure their students at least attend class the full day. And in my books, that is the true meaning of being “child friendly.”