Sometimes a person might move to the Philippines with limited resources. It happens. I don't recommend it, nor do many of my American expat friends in the Philippines advise it, either. But things happen. I've known guys that have come over to “paradise” to meet the woman of their dreams that they've been chatting with online. Problem is that Filipino “dream girl” may turn out to be married already or could be a “ladyboy.” Don't think it could happen to you? Think again. 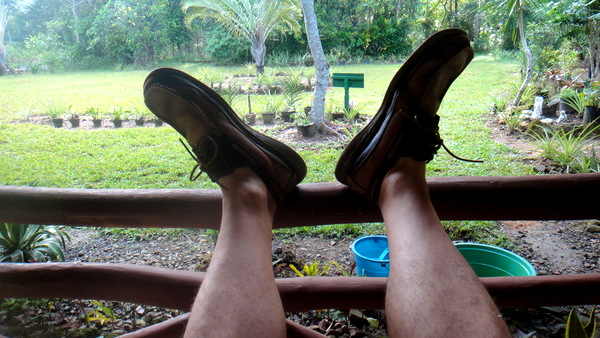 But without a guaranteed monthly source of income to fall back on, a guy could end up as a shoeless American expat in the Philippines without enough money to even buy a pair of “slippers,” the common expression for vinyl sandals or footwear here. That was my situation the other day, after leaving our local Internet cafe in downtown San Miguel, Jordan, Guimaras.

My favorite pair of shoes from the States, aside from my dress black Florsheim’s, were a pair of comfortable shoes made by Clark. I've had them over 8 years and now use them for my daily hourly walk outside “The Farm” where we now reside.

I paid about 70 US Dollars for those shoes but they had started to fall apart at the seams and were in desperate need of repair. My asawa had told me of a shoe repair stand at the “Old Site” Market area; where the Internet cafe is located, but I could never find it. But after searching for the past few weeks, I finally spotted a middle-aged Filipino sitting beside a stack of shoes, not far from my Internet spot.

I don't know why I had never spied the man before; perhaps he had been outside on the street taking a pee. Only 80 pesos (1.86 US Dollars) to fix my shoes and he could have the job done in an hour. “30 minutes” said a man standing next to him. It was a deal. I handed my shoes to the repair guy.

“Buy a pair of slippers” he advised. “No, that's OK,” I answered, “I'll just walk around barefoot until you're done.”

The small contingent of Filipinos that had gathered around the shoe repair stand was quite amused at this. “My lolo does this all the time,” I said to the group, “he always goes outside without his slippers.” This elicited a big laugh from the crowd.

I'm off. In the back of the retail shop complex are a couple of barber shops, batchoy eateries and more Internet cafes. One eatery on the corner is a place I visited early one morning with The Tom Cat, who had some business to do online but was waiting for an Internet cafe to open. He decided to order a “coffee,” which turned out to be a bottle of San Miguel Pale Pilsen. I ordered a “coffee” with him at that time and decided to have a “coffee” as I waited for my shoes to be repaired. 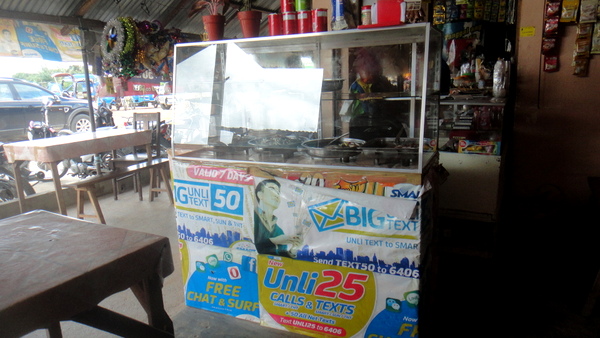 It was 9:30 in the morning, but since this was only my fourth bottle of beer since Tom's departure in early October, I thought it wouldn't hurt to have a brew. I finish my beer, note to the owner that her calendar was on “Filipino Time,” this was now late November and her calendar was still turned to October, and took off, barefoot.

I walk down the sidewalk in the back of the retail complex and hear someone calling “friend,” “friend.” Thinking it was one of the “stalkers”, Jamie, a young Filipino guy that used to run after Tom and me, I ignored the calls. But after several more shouts of “friend, friend,” I turned around. It was the shoe repair guy. He was done with the shoe repair and did not want me to have to go around barefoot anymore. That's what I call good customer service.

I gave the shoe repair man, nicknamed “Bro,” a hefty tip and thanked him for the speedy repair. He did a good job on my shoes, sewing them on the inside and out. They should be good for a few more years.

I'm cheap. You could be polite and call me frugal. But I see no need to waste money on a new pair of shoes when my old ones, now repaired, will do just fine. “I'm not going to a fashion show!” is what I always tell my asawa, if she comments on a ratty t-shirt I might be wearing as we go out. And I'm not. Old shoes, no socks, a t-shirt, and cargo shorts are my standard uniform. And I'm OK with that. When you're in “paradise” you can wear what you want. And I want to be comfortable.