As noted in a previous post, Sunday is the biggest market day on the island province of Guimaras where my Filipina asawa and I now reside. This particular Sunday was right after the biggest natural disaster of the Philippines, Typhoon Yolanda, hit. Fortunately, we did not suffer any personal injuries or major damage at “The Farm,” our new residence on the mango island. 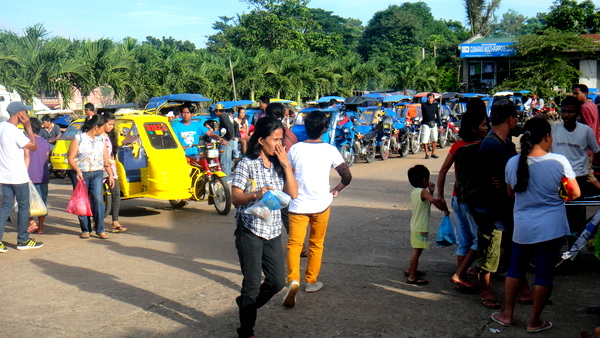 However, as most of you reading this already know, the loss of human life and damage to property was horrific. At the time this article was written, at least almost 5,000 people are officially confirmed dead. Some estimates put the actual death toll at over 10,000. Our hearts go out to all of those that lost their loved ones.

Pork and fish prices were understandably higher, about 20 pesos more per kilo for fish and pork. The fish selection was limited at the New Site in San Miguel, Jordan, where we usually shop on Sundays, only milkfish, so I opted for chicken and pork. I had eaten fish on a daily basis the week prior and wanted a change. The pork was P190 a kilo, 4.42 US Dollars a kilo, $2.00 USD a pound, and four large chicken breasts cost P238, 5.50 a kilo, 2.45 USD a pound.

But the fish/veggie/rice diet, along with my daily hour of morning walks, has enabled me to lose 10 pounds in about three weeks. The fact that The Tom Cat has now left for the States might also figure into the equation. Tom and I would share a “few” bottles of San Miguel Pale Pilsen whenever we met and since he departed on October 9. I've only had three bottles of Pilsen since, more than a month later.

I wait for my asawa outside of the main wet market area. I figure her odds of getting a good deal on fish and meat are better if her “rich” kano husband waits outside. I use the time to observe the sights and sounds of the crowded Guimaras marketplace and snap the occasional photo, such as the one featured below. 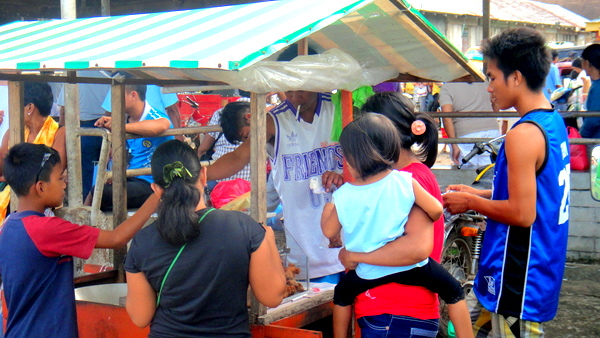 The vendor shown in the picture was selling chicken. He was doing quite a brisk business as he picked out pieces of chicken, counted out changed and chain-smoked cigarettes all at the same time.

The cute Filipina in the next photo was drawing some attention from the males in the market. Note the man in the white shirt checking the young lady out. I did not get my camera turned on in time to capture her face, but she was typical of many of the pretty pinays found in the Philippines.

Here's a tricycle that went by. It wasn't as packed as you might see other trikes which have loads of stuff, including people, riding on top of the contraptions. Note the line of jeepneys in the background. Dozens of jeepneys are at the New Site market in Guimaras on Sunday waiting to take shoppers home. People in the surrounding towns come to the San Miguel Marketplace, some even bringing in their own cows, pigs, goats and chickens to sell on that busy shopping day.

Tricycles waiting for shoppers as shown in the lead photo. The blue trikes are for people going to nearby Santa Teresa, where our nieces and nephew attend high school, and the yellow vehicles are for locals living in San Miguel.

Want to travel to your shopping destination in Guimaras in air-conditioned comfort? People from Manila rode this Dimple Star Transport to visit the mango province in style. 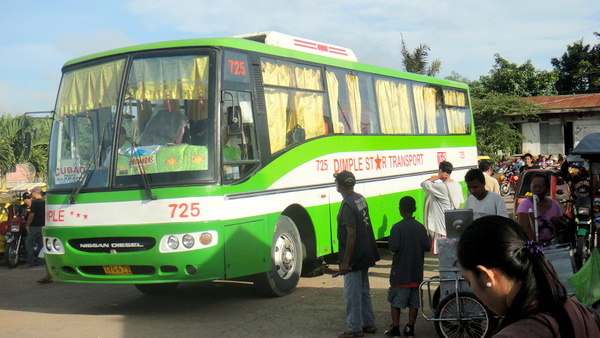 My asawa and hired a trike to take us back home. It's a P10 ride per person, if you have one to two passengers. Since it's a 45-minute ride home and we're loaded down with groceries, we splurge on Sunday's and take the trike. We usually walk to the market, however, if it's not raining. The extra exercise is good for me as I need to lose some more weight.

Without my expat friend Tom around anymore to tempt me with a beer or two, plus that hour of walking every day, I should be able to lose even more of my gut. My blood pressure has improved to 120/78 (was up to 150/97 and even higher at one time), so my diet and exercise is proving to be beneficial. And that's a good thing. I plan to stick around for more shopping days in paradise.