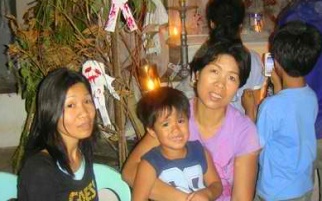 The wife and I have to go to Iloilo City later today to pick up her sister Marjorie who has been working as an OFW (Overseas Filipino Worker) outside of Jeddah, Saudi Arabia. The OFW’s used to be called OCW’s (Overseas Contract Worker) as was the case with my wife Melinda when she worked in Singapore and in Taiwan. Marjorie had a two year contract with an employment agency from the Philippines that was not due to expire until December 2010. Over 11 million Filipinos work overseas as OFW’s since unemployment here is so bad.

Marjorie’s two children, my niece Shaina (12), and nephew Sherwin (10) live here with us and have not seen their Mom for almost five years. Marjorie has been separated more than seven years from her druggie husband that her and the kids never see anymore. She can’t get a divorce and can’t afford an annulment.

Marjorie has been working outside of Jeddah, Saudi Arabia and has been taking care of a family of fourteen. She does all the cleaning and cooking for the family. As part of her daily duties she would go out in 130 degree heat and sweep their long, long driveway. She was the only worker there. Then the family started adding a third story to their already 2 story house, and already bad conditions worsen. More dust from the construction made things even more difficult for Marjorie since she had also injured her shoulder weeks earlier, but the family she worked for refused to take her for medical attention. As you can see by the attached photo, Marjorie is not a very large person, but was happy to get the job which paid 800 SAR ( Saudi riyal ) a month, approx. 225 in USD.
Last week the Mom of the household accused Marjorie of trying to stab her with a pair of scissors. The Mom has always complained about everything Marjorie has done there since she arrived last December 2008. Of course Marjorie did no such thing, but it was a terrible charge against her that could very well land her in a Saudi jail.
Melinda’s now deceased brother Luis (who ended up being murdered working in a ship off the coast of Africa) once worked in Saudi Arabia and spent six months in jail because a fellow Filipino worker caught stealing from the airport falsely accused Luis of stealing.
When the authorities wanted to know who else was in the theft ring, the thief pointed at Luis who was nearby working in the airport. Off he goes to jail. No trial. No nothing. The Philippines government intervened after pleas from my wife’s family, and Luis was released after six months.

So Marjorie was definitely in some trouble . Text messages flew between her and my wife starting last week when this all started. The police got involved. Marjorie was trying to get to the Philippines Embassy in Jeddah to get help, and all of a sudden this past Friday the wife tells me Marjorie is on a plane headed back to Manila. She doesn’t have all the details yet, but when we pick up Marjorie this afternoon, I’m sure she’ll fill us in. Another day in the Philippines.

Originally published September 2009. Marjorie is currently working in Kuwait and has been there the past three years. She hasn’t seen her children in that time.