The best of the 2013 Manggahan Festival. The mango mash ended two months ago. But I’ve lived in the Philippines for close to four years now and despite the government’s push to adopt Philippine Standard Time,  I’ve decided to embrace the more laid back, traditional “Filipino Time,” thus I’m just posting this article now. 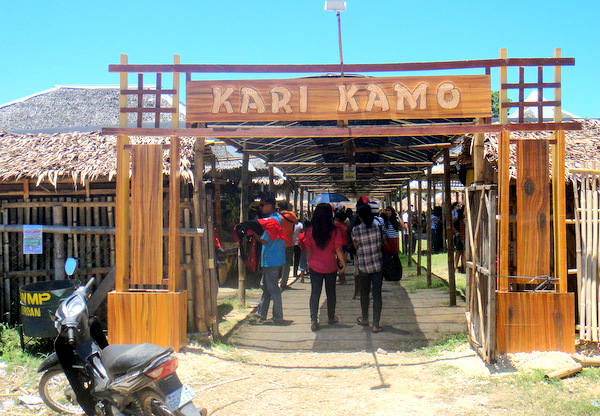 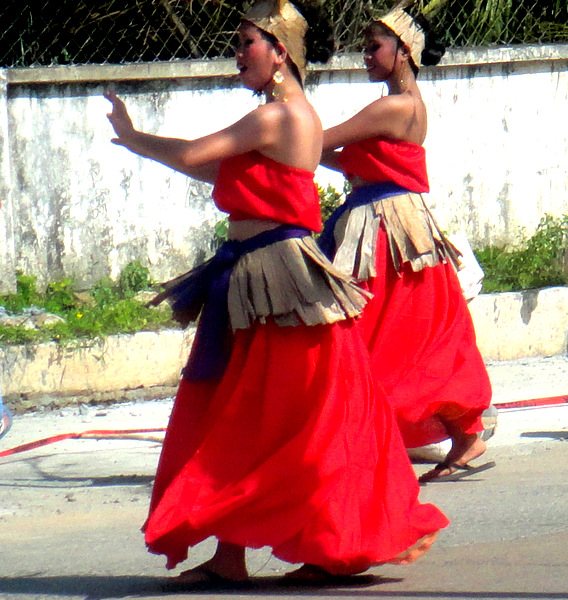 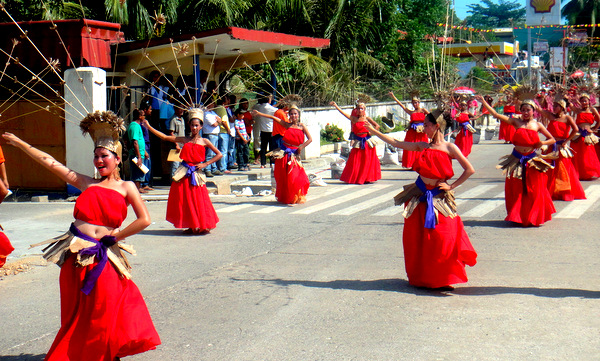 My favorite dancers in the street dance competition was the Hubon Sinulog group from Sibunag in Guimaras, and,  if I’m not mistaken, pictured above.

According to an article in The Daily Guardian, the Hubon Sinulog bested five other groups in the Community-Based Rural Tourism (CBRT) Tribes Competition in the  Manggahan Festival.

Aside from taking home a P50,000 cash prize, 1, 167 US Dollars,  the dancers will represent the Guimaras Province in next year’s Dinagyang Festival Kasadyahan Competition.

I don’t know if it was the plethora of pretty pinays in this band of beauties or their exposed navals, but I was happy to learn that this particular hubon, group,  won the competition. They certainly deserved it. 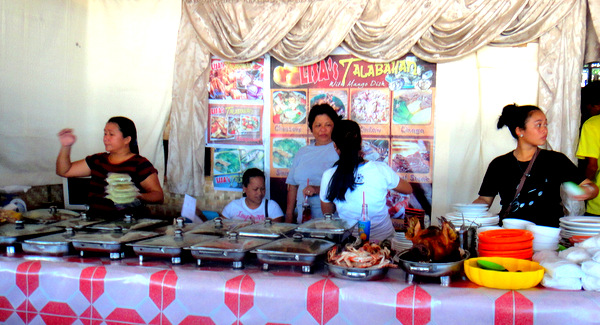 Hands down, no competition,  it’s hard to beat the food at Lisa’s Talabahan. Regular readers of Philippines Plus will doubtless recall other stories I’ve done about my favorite talabahan, oyster bar, in Guimaras.

OK, so they haven’t changed their sign since 2011, as evidenced by the above picture, but who cares? Everyone, except the government which is trying to force Philippine Standard Time down everyone’s throat, still  loves “Filipino Time.”  Lisa’s is only a couple of years behind.

But the oysters are fresh and at P30 a bowl, you can’t beat the price. My asawa always orders a couple of bowls while I opt for six pieces of grilled pork and chicken breast on a stick. Add in a couple of  bottles of San Miguel Pale Pilsen for me, and a Sprite and bowl of rice for my wife (what else), and the bill only comes to P180, 4.20 US Dollars. Now that’s value. 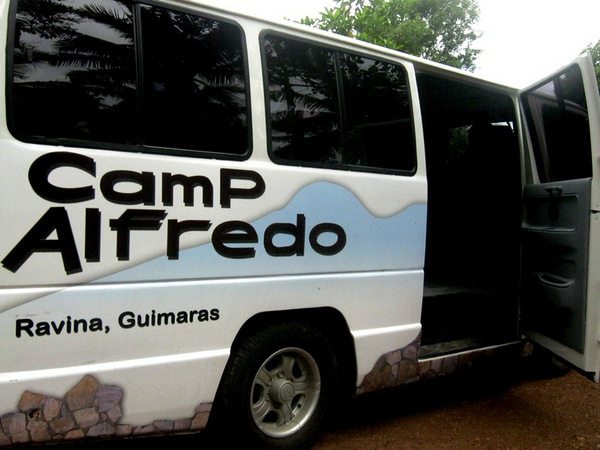 Camp Alfredo’s is a  one stop family, nature and adventure destination on the island of Guimaras. Alfredo’s had an eatery at the Manggahan Festival and while I waiting for my American expat friend, The Tom Cat, one sunny afternoon, I decided to stop by their establishment for a cold beer. And I’m glad I did.

The first sip of my bottle of San Miguel Pale Pilsen was akin to the nectar of the gods. The coldest bottle of beer I’ve ever tasted in the Philippines after almost four years of living in “paradise.”  After quickly draining a bottle, I walked over and spoke to one of the employees stationed at Camp Alfredo. I complimented him on the cold Pilsen and was informed that they have an “absolute zero” freezer they kept their beer in.

So while I was searching “Google Images” for an appropriate photo for this section, I stumbled across the following picture that featured a cute Filipina that is the lead singer of a band called, what else, “Absolute Zero.”  While the pretty pinay might not look as good as a chilled bottle of Pilsen, she’s a close second. 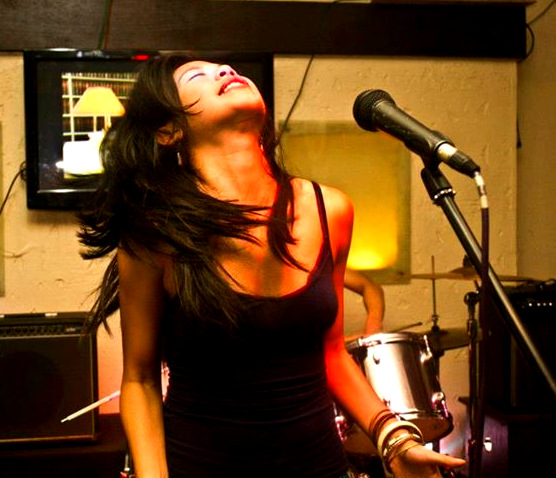 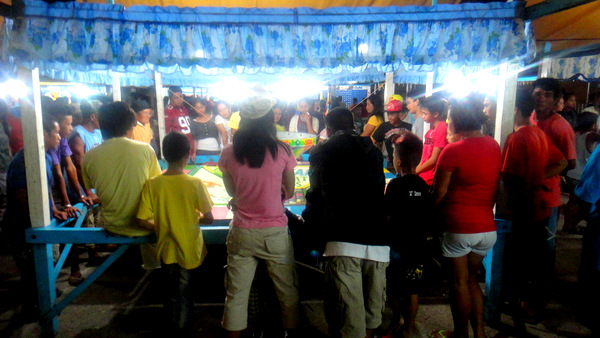 Once the sadistic summer sun stops scorching your skin, the best place to hang out for some good, clean fun at The Manggahan Festival is the carnival operated by Triple M. Triple M, a private company that operates carnivals throughout the Philippines, was in charge of the concession area and charged a P5 (12¢) admission fee and P20 (47¢) per ride, down two pesos since this article was published last month thanks to the stronger peso to dollar exchange rate.

Plenty of cheesy, carny con games operating, but isn’t that half the fun of going to the carnival? Don’t want to risk your life on the Ferris Wheel or Merry-Go-Round? Just stand back and do some people watching. The place was packed with plenty of pretty pinays.

Best Band: “The Sold Out Band” from Iloilo 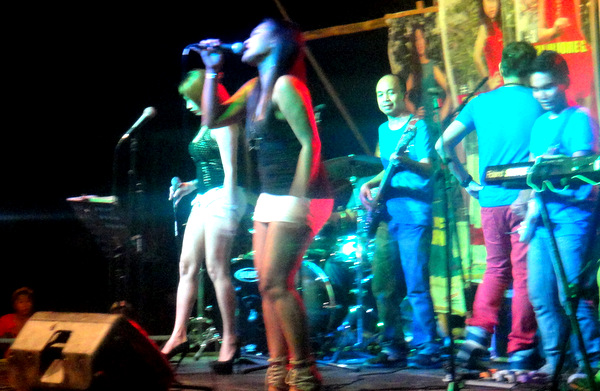 Ok, the “Sold Out Band” from Iloilo might have been the only band I listened to during the 2013 Manggahan Festival, but they were still a decent cover band. A duo of cute Filipina vocalists in shorts didn’t hurt either, but my asawa and I didn’t stay for the whole set.

During last year’s provincial party, my wife and I would stay until 1 or 2 am listening to the various musical groups. But “Fearless Frank from Florida” was in attendance then and kept the party hopping for us. But my old age is catching up with me. I barely stay awake past 8 pm and I’m usually up by 3 am.

The lead male vocalist welcomed the “foreign visitor,” and nodded in my direction. I was the only kano in the crowd, as far as I could tell. There was a definite lack of foreigners at this year’s festival. In the past three events we’ve attended, I’ve always seen a good assortment of foreigners, but not this year. 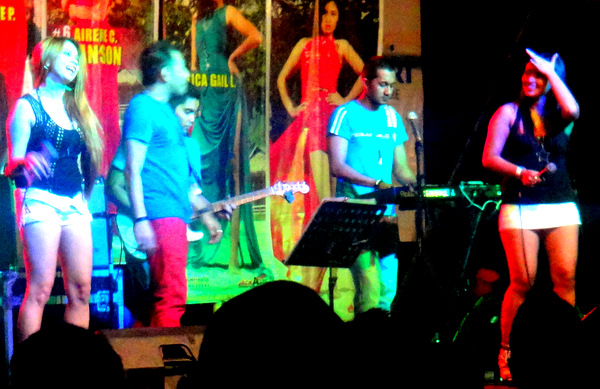 The blazing hot, furnace blasting heat of the April sun made wandering the festival grounds during the day extremely difficult. The first festival we attended four years ago was held in May, when it’s even warmer. It would be great if the restaurants and other areas would have more fans. Cooling, misting fans would be fantastic.

I realize the organizers of the event have no control over the weather, of course, but perhaps this might explain the lack of foreigners we saw this year. I dearly love the Manggahan Festival and we plan to return next year.

I doubt that the date could be changed during the cooler months of January or even February since the mango isn’t in season yet. And what’s the sense of having a Manggahan Festival, Mango Festival, if you don’t have any fresh mangoes?

But all in all, I would highly recommend a visit to next year’s party. There’s a new governor in Guimaras, the Honorable Samuel Gumarin,   and I’m curious what changes, if any, he will make.  Maybe I’ll have more “best of Manggahan” features to add.

8 thoughts on “The Best of 2013 Manggahan Festival”