Here’s more fine filipinas  that I observed at the Manggahan Festival held in the sweet mango province of the Philippines this past April. The young lady pictured below gladly posed for this photo as she clung to her cute baby daughter. 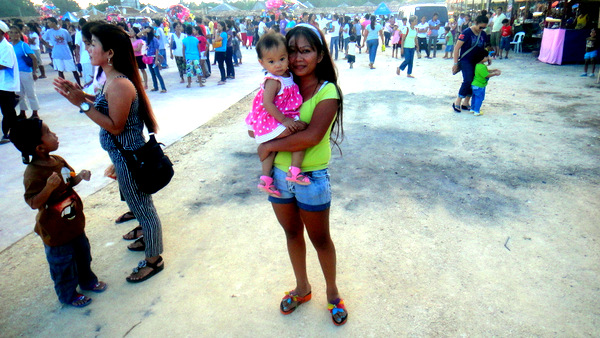 Aside from a few shy South Koreans I met during a recent visit to Raymen Beach Resort, I’ve never had anyone refuse my photo requests. I always approach everyone politely, pour on my considerable charm (remember, this is my website) and explain I have an asawa. Most filipinos smile and let me snap their picture with my wife’s Sony CyberShot Digital Camera.

The pretty pinay featured in the next two photos was involved in the  ABS-CBN Kapamilya Karavan 2013 that was held Sunday afternoon at 3 pm on April 14, 2013, the first official day of the Manggahan Festival. The noise from the stage show was deafening at times. My American expat friend, The Tom Cat, and I, had difficulty hearing each over as we quaffed a “few” bottles of San Miguel Pale Pilsen. We must have heard the official Manggahan Festival theme song around a thousand times. 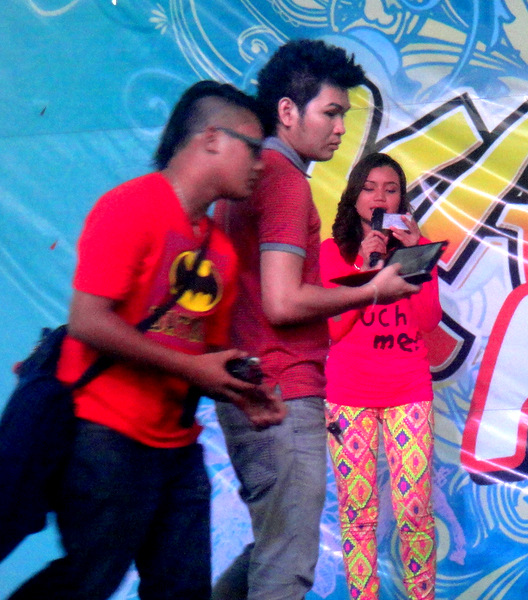 It was hotter than the skin tight leotards the cute Filipina emcee was wearing, but we sat in the shade underneath Lisa’s Talaban and managed to catch a breeze from one of the few fans found at the mango party. Would be great if  misting fans could be set up throughout the festival grounds, but I doubt that’s in the budget.

With the mango mash being held in April, one of the hottest summer months, a cooling station could provide some relief from the heat. Even after four summers as an American expat living in the Philippines, I still find the summer months the most difficult to deal with weather wise. I’m ready for the rainy season which should be starting soon. 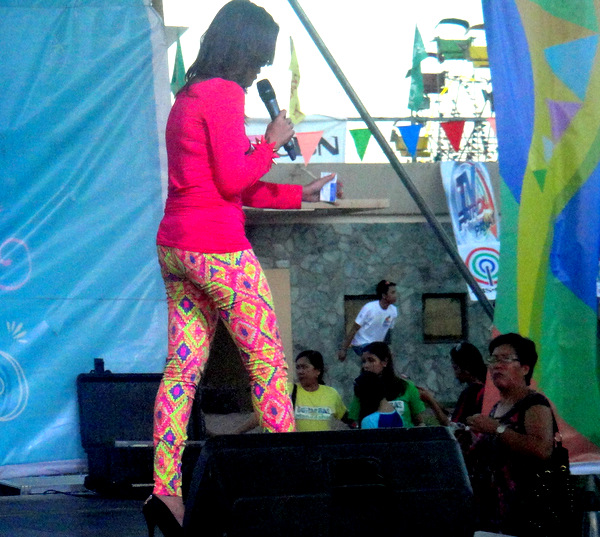 Don’t know the lovely lady’s name in the colorful leggings pictured above, but believe she was from the ABS CBN Iloilo City television station.  I sincerely do not know how some of these pretty pinays manage to get into the tight-fitting jeans, leggings and other form-fitting outfits that I’ve admittedly noticed since moving to the Philippines almost four years ago.

During my teen years I could have poured myself into a straight leg pair of regular fitting Levi’s, but with my advanced age, 61, I’ve put on quite a few pounds over the decades and wear loose fit Levis now. If not for my daily early morning walking regimen around our subdivision, I would probably balloon up like Jerry Lewis on steroids. 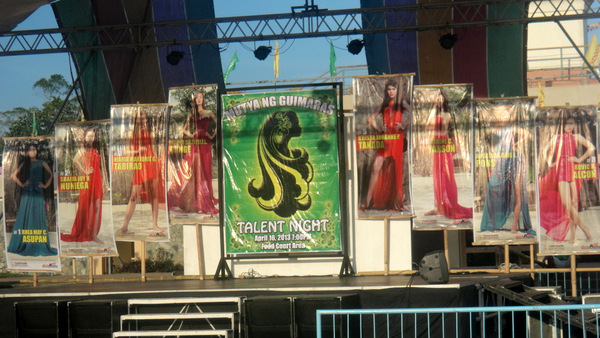 Here’s a shot of the posters for the Mutya Ng Guimaras, Pearl of Guimaras, Talent Show contestants. The talent show was held during the Manggahan Festival on Tuesday, April 16, 2013.  One of my asawa’s countless relatives from the mango province, Maria Daziella Lazaro Gange,  was in the group of eight ladies vying for the title in the beauty contest portion of the competition which was held later that week, on Friday April 19.  My wife and I went to the finals of this competition two years and covered it in this post.

My wife has never met Maria Daziella L. Gange from San Lorenzo but believes they are probably related since they share the same family name. When I jokingly state on this website that my spouse is related to half the people on this province, I’m probably not exaggerating by much.

It seems we’re always running into some relative on the pump boat, jeepney, or the local market whenever we visit our former home. If you encounter a relative (or friend) on a jeepney or boat, expect to pay their fare. That’s a custom my wife faithfully observes. Here’s a large poster that was displayed on the festival grounds at a kiosk set up by the town of San Lorenzo where the Filipina beauty resides. 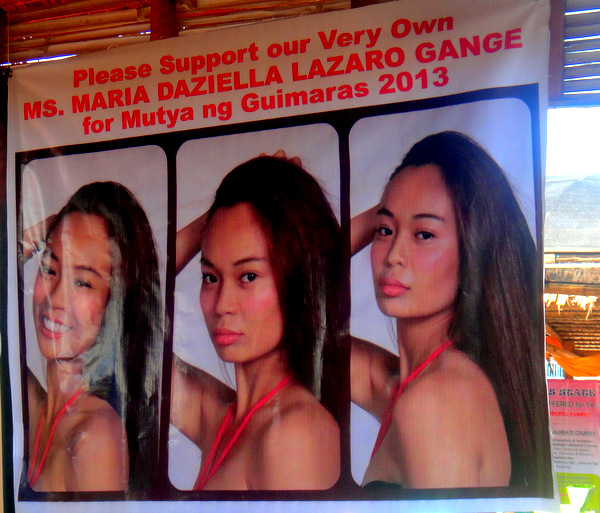 Maria Daziella played this musical instrument for her portion of the talent night. Each person was allowed three minutes for their performance and would be penalized if they went over the time limit. The entire talent show only lasted 30 minutes. 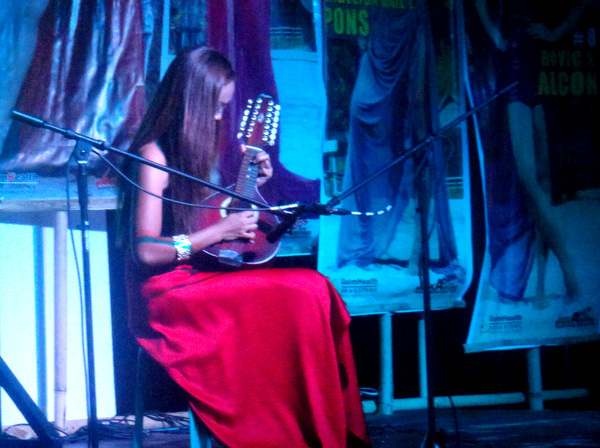 Have no clue as to who won the talent competition or who ended up as the winner of the overall beauty competition on Friday night. My asawa and I left on Thursday morning. The original plan was to return to our home in Iloilo on Saturday and attend the  Mutya Ng Guimaras contest on Friday evening. But after four days, I was anxious to return to our domicile.  There’s only so much partying a 61-year-old geezer like me can handle. 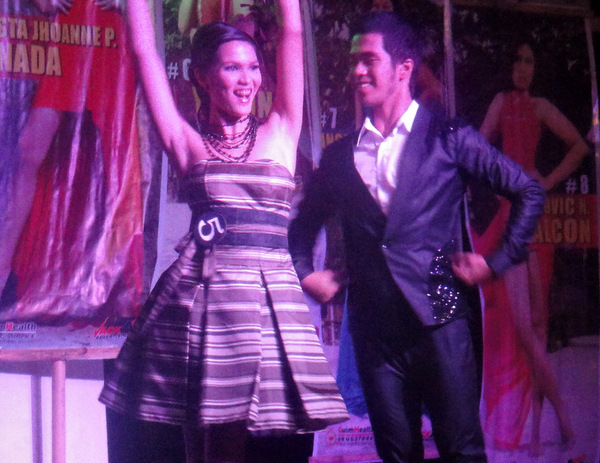 The pretty pinay featured above had a dance partner. The contestants were not required to do their act solo as my wife’s relative, and the young lady depicted below, did. 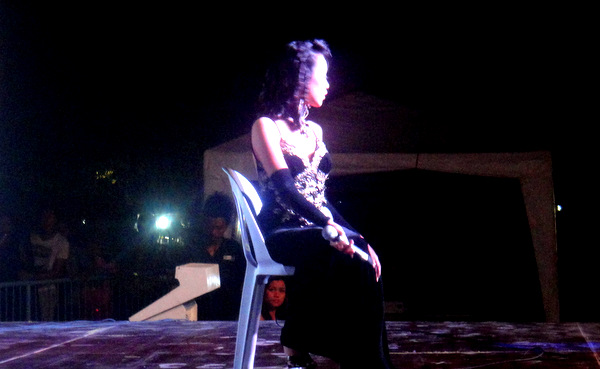 Don’t remember the song the lovely Filipina warbled. This was back in April. I can barely remember what I had for breakfast this morning.  And please don’t ask me what day of the week it is. Since moving  to the Philippines, I have to look at a calendar to determine that. Every day is the weekend when you’re retired. 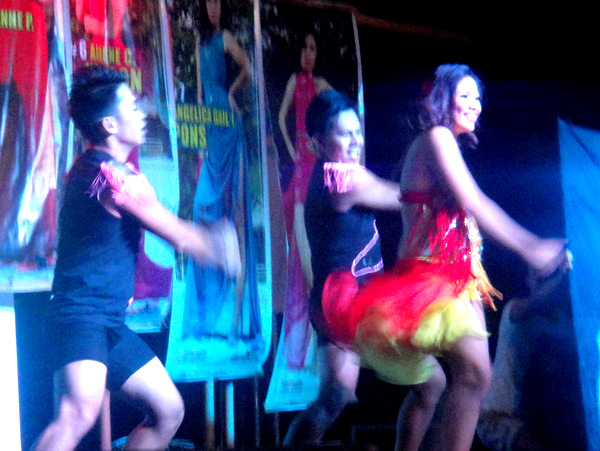 But the excitement level went up (as did my blood pressure) when this dynamic Filipina went on stage to do her dance number with some energetic pinoys. She put on quite a show and in my opinion, should have been one of the favorites to win the talent portion of the competition. 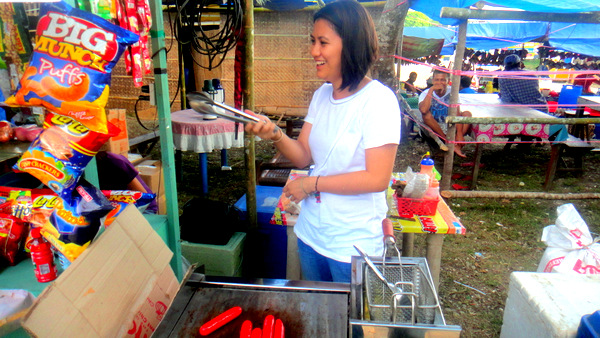 The next day I spoke to this young lady operating a hot dog stand at the Manggahan Festival. Pleasant girl who also happened to be related to my spouse. Somehow I wasn’t surprised. 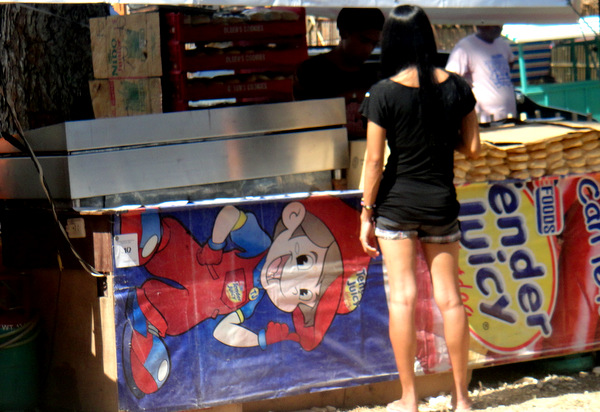 I’ll close this segment with a cute Filipina that had her back to me.  She was checking out the hot dog stands which I avoid. The red dye color they inject into the most of the hot dog products in the Philippines is not one bit appealing to me. But a pretty pinay with nice legs?  That’s a different story.