So many cute filipinas in attendance at the recent Manggahan Festival in Guimaras. Further proof for you single guys that you’re truly missing out on meeting some of the most beautiful women in the world if you’ve never visited the Philippines.  Plenty of pretty pinays parading around at the annual provincial party. Here are some of the lovely ladies that I met.  I apologize to my faithful readers. I’m also in some of the shots. 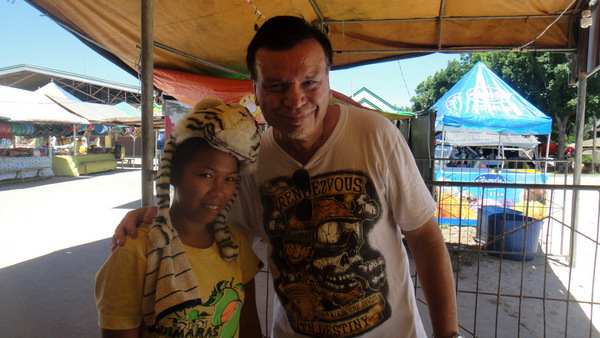 Animal-themed hats, as worn in the photo above by the young lady, seemed to be quite popular. Has this anything to do with furry fandom, a subculture fascinated in fictional animal characters with human personalities and characteristics? Who knows. The young pinay, 21, worked at a hot dog stand outside of the carnival entrance.  Those hats have to be extremely warm, especially during the summer months of April and May in the Philippines.

The shy Filipina was somewhat reluctant to have her picture taken but an older gentleman that was nearby (part of the hot dog crew) persuaded her to pose with the aging American expat and took the photo for me. 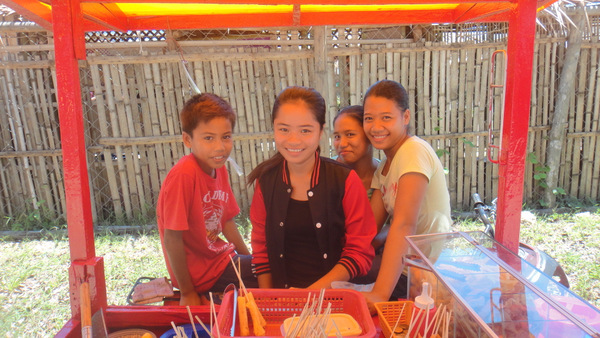 Ordered some very tasty lumpia, french fries and fish balls from the pretty pinay in the center wearing the jacket. Her mother was working nearby and was frying the food. Nanay (Mom) informed me her daughter, Beverly, was 23 years of age! She looked much younger. The two Filipinas on the right came over from a nearby stand since they also wanted to be in the picture.  Great folks. Friendly. And good food at a very cheap price. Only 2 pesos for a stick of lumpia and 3 pesos for 3 fish balls on a stick. Did you know fish have balls? 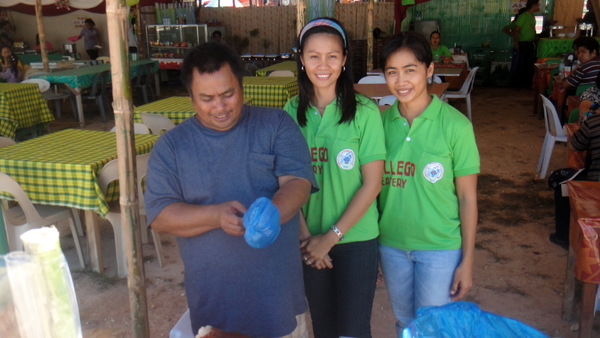 The Filipino, on the left in the photo above, was preparing lechon for the Allego Eatery in Guimaras. The crew graciously allowed me to take their photographs. I didn’t taste all of the products of every place I stopped but never had anyone refuse my photo requests.

The Tom Cat, my American expat friend living in Guimaras,  took the following picture of this pretty Filipina and a male friend that was accompanying her. We were in the covered trade fair area which provided a bit of relief from the scorching sun.

An occasional cold bottle of San Miguel Pale Pilsen also helped beat the heat though most of the eateries at the Manggahan Festival did not have enough fans. Lucky to find even one fan in each different restaurant section and if you were  fortunate enough to find an empty table next to one, that was the best place to sit. 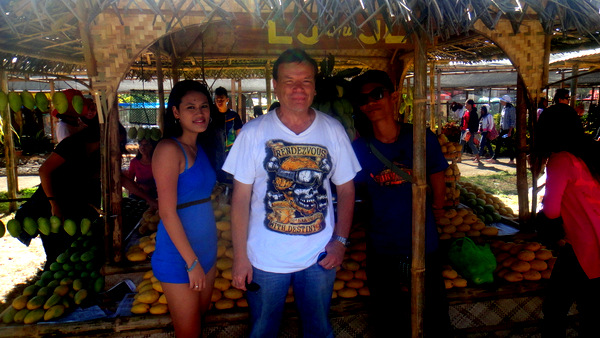 Pretty pinays in pink in Guimaras working at the Seaman’s Kitchenette in the next shot. The owner, a seaman,  on the left,  is a smart businessman. Cute filipinas in shorts are sure to catch the eye of most male festival goers. Probably didn’t do much for any ladyboys in attendance, however. 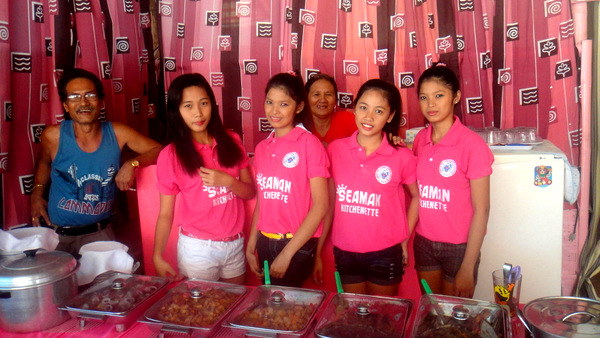 You’re going to find a bunch of mango stands, of course, at a Manggahan (Mango) Festival, many staffed by lovely Filipinas. Here’s a picture of a couple of young ladies working at their booth. 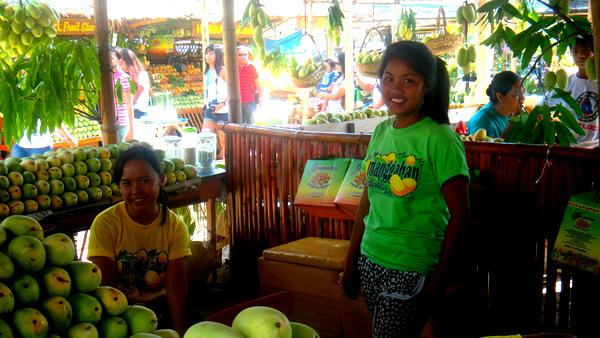 I had to take a picture of “Daday’s” stand in the next photo since “Daday” is my asawa’s nickname. If you have ever visited the Philippines you’ll know that the vast majority of Filipinos have nicknames. If I ask one of my nieces, April (Che) and Michelle (Chen Chen),  who their tita (aunt) is talking to on the phone (often one of my wife’s sisters) I ask them to please identify the caller by their real name. I have a hard enough time remembering their real names let alone their Filipino nicknames. Remember, I’m a 61-year-old geezer.

Since I usually can never recall April and Michelle’s own nicknames, I refer to both of them as “Bonehead.” Makes it easier for me. 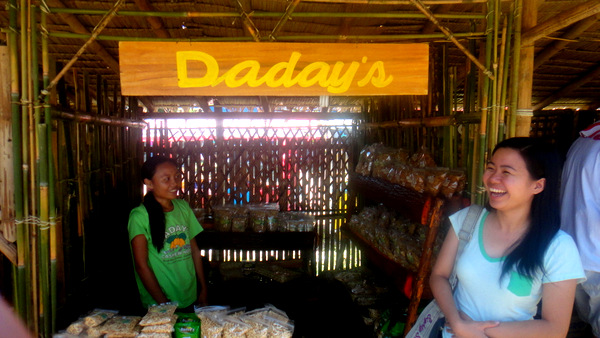 The Tom Cat took this photo in front of one of my favorite mango stands at the festival with Ira working the counter. Cute Filipina that made some great shakes. Most of the milkshake venues used cans of  Alaska brand milk. I did not taste one bad mango drink of the many I tried during our stay at the festival. 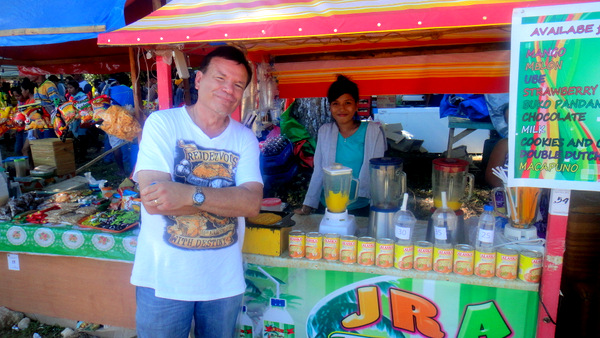 More pretty pinays in the Philippines coming up in future posts. Let me close with a picture that Tom Cat took for us, one that features my own beautiful asawa.  I’m one fortunate American expat living in the Philippines and brother, don’t I know it! 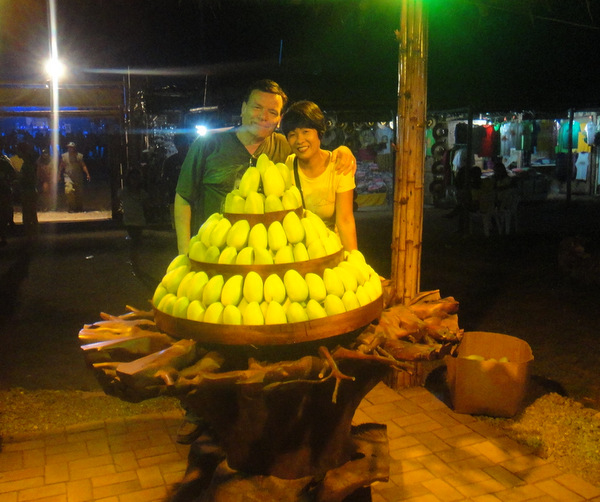