Recently attended the 20th Annual Manggahan Festival in Guimaras.  Though an article from the Philippine Information Agency, PIA, reported the mango province is looking for hotel investors to invest in creating more accommodations in the province, we had some spacious digs at “The Compound.” “The Compound,” at my asawa’s home in the Jordan municipality we resided for over two years, provided our housing for the mango event. 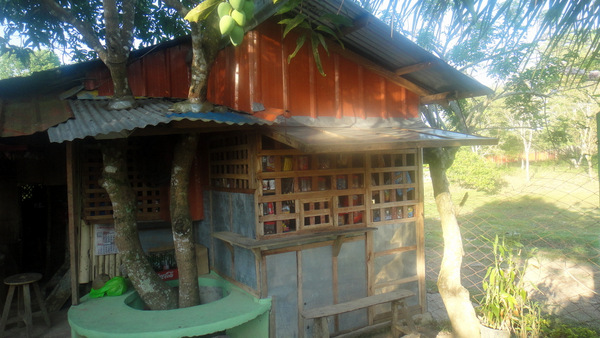 Unlike a recent Saturday in our home at Iloilo where we were without power for almost 12 hours and water from MIWD, the Metro Iloilo Water District, only lasting a little over an hour, we had plenty of electricity and water in Guimaras. And the well water at my spouse’s residence is an excellent source of tubig. No need to buy any drinking water from any neighbors like we do in Savannah Subdivision at our Iloilo home.

My sister and brother-in-law, along with our two nieces and nephew, now live in the home my wife had built for her family while working as an Overseas Filipino Worker, OFW.  Alida, my wife’s sister, wanted to move their stuff out of the room we formerly occupied, but I insisted we sleep in the nipa hut in our front yard, where my relatives used to live (see photo above.)

I had slept on the couch when we visited Guimaras a few weeks ago when we were having problems with Lolo and his imaginary girlfriend, Pearly. (Cousin Alex, foreman of the “The Compound’s” construction crew, is incidentally now caring for Lolo, at Alex’s home in Ravina.  Last reports have my father-in-law being closely monitored by Alex, who is related to both sides of my asawa’s family. Thankfully we haven’t received any calls recently that he has been wandering alone at night in the jungle looking for duwendes.)

My asawa slept on the nipa hut bamboo floor (see  next picture) at that time. Much cooler. My father-in-law also was in the hut waking up at odd hours of the night and more incoherent than me after a night of too many bottles of Pale Pilsen. 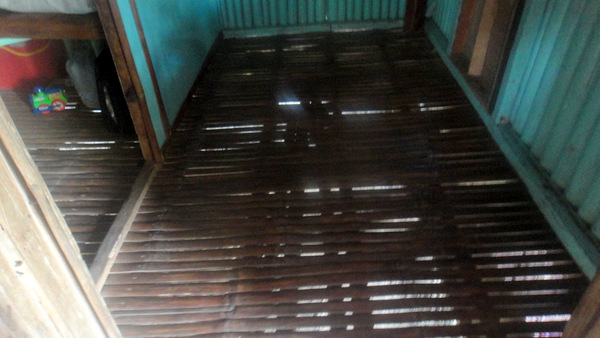 So it was a no-brainer to use the nipa hut. Only a ten minute walk from the Manggahan Festival. Though the Tom Cat, our American expat friend in Guimaras, had graciously offered us living quarters at “The Farm” where he resides, we opted to stay at “The Compound.”

I had never slept on a bamboo floor so I looked upon it as an adventure. My asawa put a thin vinyl mat on the floor and Lola gave us a couple of pillows. My spouse used a bed sheet to cover with but I didn’t use it. The overhead fan (next pic), though noisy, was cooling me off enough but not so much I had to use any kind of cover. 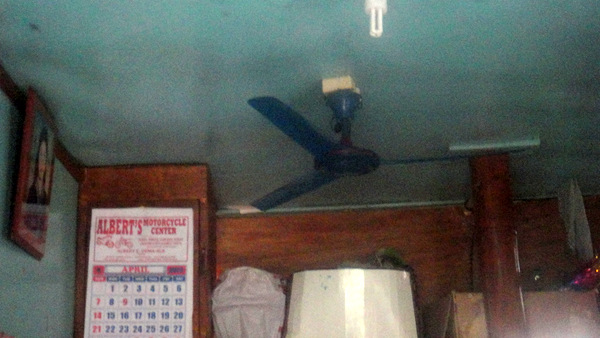 Could have opted to sleep on the bamboo bed in the next room (shown in the next photo) but decided that the floor in the room we slept in would be the coolest as the air circulated from the bamboo floor slats. 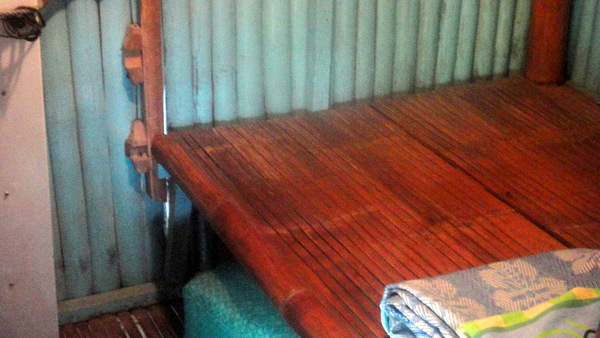 Actually slept later than I did back home in Iloilo in the air con. Much quieter in Guimaras even though I could hear the strains of the live bands from the festival grounds. I had hoped to stay awake long enough to listen to the musical groups in person but with some of the bands not starting until 11 pm, it was way past my bedtime. We did stay long enough one evening to hear a group from Iloilo City, “Sold Out,” and I’ll be featuring a story on them later along with some photos of their band (which included two pretty pinays.) 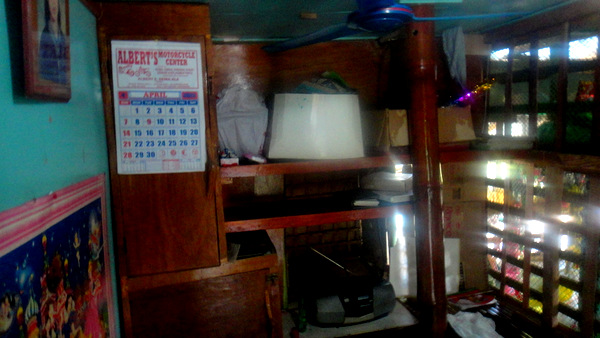 Above is an interior view of the nipa hut built by my brother-in-law Joery and neighbors several years ago. Joery has a sari sari store attached to the side of the hut now and had a steady stream of customers early in the morning starting around 5:45. My asawa and I were up at 5:00 and cleared out of the hut to make room for our brother-in-law’s business. His biggest sellers? Cigarettes, soda, ice pops and biscuits (crackers.)

Didn’t ask Joery if he was making much money with the sari sari store but he did make a trip to Iloilo to restock the store and spent P500, 12 US Dollars,  so I think he’s doing alright. The main source of the family’s income is my sister-in-law’s preschool and her tutoring.

With the well right outside our nipa hut (to the left in the next photo), I could splash some water on my face and wash my hands after taking a pee in the front yard in the morning while it was still dark. Didn’t want to disturb my family in the main house and use the Comfort Room we had built there a few years ago. I would duck in the CR after everyone was awake and though the house doesn’t have running water now, at least I had a plentiful supply of water from the well to use. 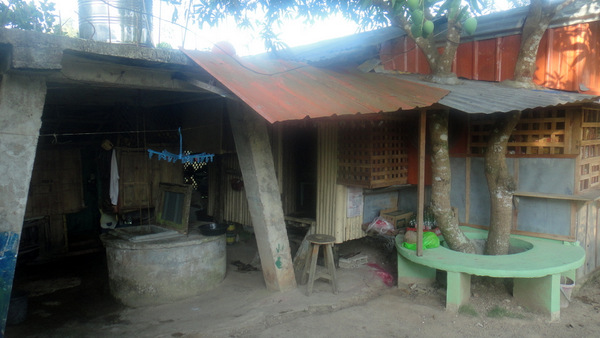 Deluxe accommodations in Guimaras for the Manggahan Festival? The price was right and we were among some friendly relatives and had a good time. What more could a person ask for?