Guimaras. Sweet mangoes. Bewitching beaches. Pretty Pinays. Massive amounts of Red Horse. The perfect formula for a Sunday afternoon beer garden birthday bash in Guimaras. Retirement in paradise.  It’s  a tough job. But somebody has to do it. 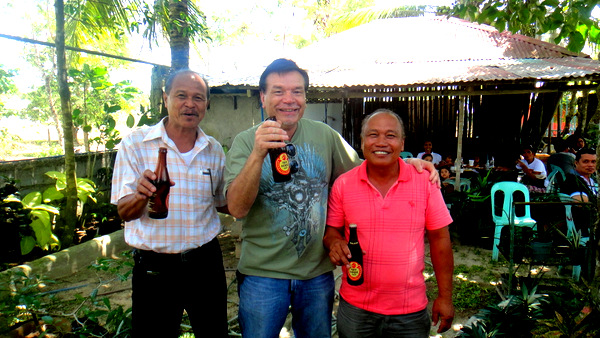 My asawa’s cousin, Emma, proprietress of the Jade Marketing and General Merchant Store and Hollow Blocks Factory, along with her gregarious husband, Danit, aka “The Joker,” held a celebration for their two sons, Joe Michael (the eldest) and younger brother Allen Mark.  The parents were giving a party in thanks for their son Joe Michael being spared in a horrendous motorcycle accident in Guimaras four months ago. He’s still recovering from his injuries. That’s him along with my beautiful asawa in the following photo.  Lola (Grandma) is in the background. 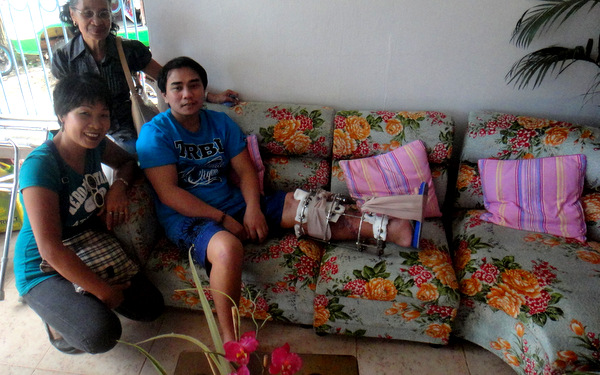 Joe Michael has already had eight operations. The doctors have him in the external fixation device seen in the picture. This system allows an adjustment of the bone fragments and compresses the fractured bone ends together. Two or three pins are inserted into each bone fragment. A ninth operation has already been scheduled. He takes it in stride. Doesn’t complain and usually has a smile on his face. He’s truly fortunate to be alive.

The beer garden birthday bash, at the home of Emma and Danit outside of Guimaras, was also being held to celebrate Allen Mark’s 22nd birthday along with his recent passing of his Nursing Board Examination. No small feat in the Philippines. A total of only 16,908 out of 49,066 nursing students passed the December 2012 Nursing Board Licensure Exam, the Professional Regulation Commission (PRC) announced Wednesday, January 30 (source: Rappler.com.)

Allen Mark is currently finishing up his studies. However, the job market for nurses from the Philippines does not look good. At the beginning of 2012, more than 200,000 registered Philippine nurses could not find work, and an estimated 80,000 graduated last year to join an already saturated job market (source: BBC News.)

According to the BBC report, when  the global economy went into recession, the United States and other western countries stopped hiring. To make matters worse, many countries have recently been trying to train more of their own nurses and therefore discouraging the hiring of foreign staff. As a consequence, visa requirements – especially in the US and Europe – have gotten much tougher, restricting Filipinos to job opportunities in the Philippines.

And with so many applicants for every job, Philippine hospitals are only recruiting those with many years of specialist experience, leaving most graduates with nothing.  Hopefully, our relative (seen in the next picture standing next to me) can buck the trend and find a job. He’s a good kid. Bright. And personable. 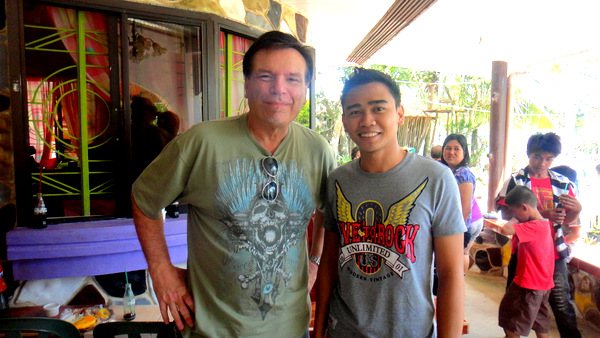 I gave the young nursing student some flak for not buying his girlfriend, seen in the following picture, something for Valentine’s Day. He explained that he has no money. I understood. But next year I encouraged him to try and get something for his girl.  After all, I remarked to him, I took my spouse to KFC and bought her a one piece chicken meal with rice. And that included a soda! 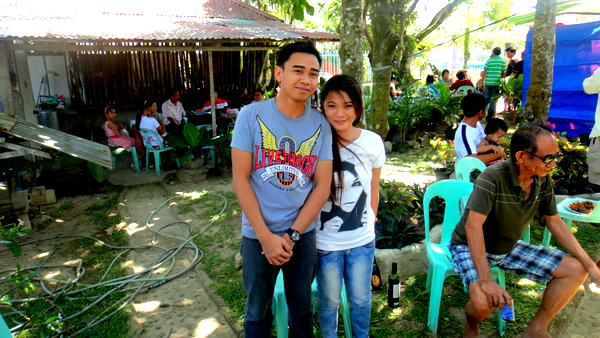 I asked his girl friend if she wanted a baby. “Yes,” she replied. “Do you want babies?” I asked (by this time I had consumed a couple bottles of Red Horse with my amigos.) Again, another affirmative reply. “Do you want a LOT of babies?” I inquired. “No, no,” she answered, “not a lot!”  If the couple are going to wait until they’re married, however, she might be in for a wait for those kids. When I asked Allen Mark when he was going to marry his girlfriend he informed me: “Ten years.” He got “the look” for that answer.

Lots of guests at the beer garden birthday bash. My unofficial estimate is upwards of over 100. Lots of friendly people and plenty of  food and drink. When our relatives from Guimaras throw a party, they go full throttle and pull out all the stops.  Here’s a few photos of the guests in attendance. 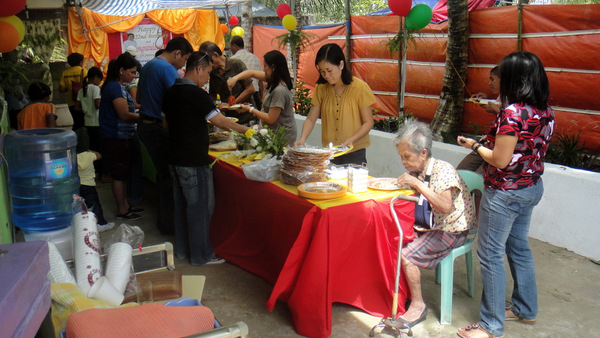 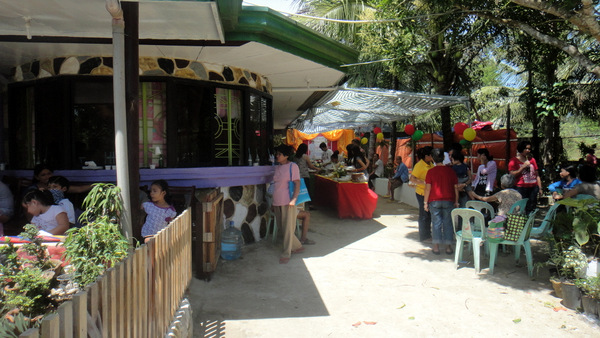 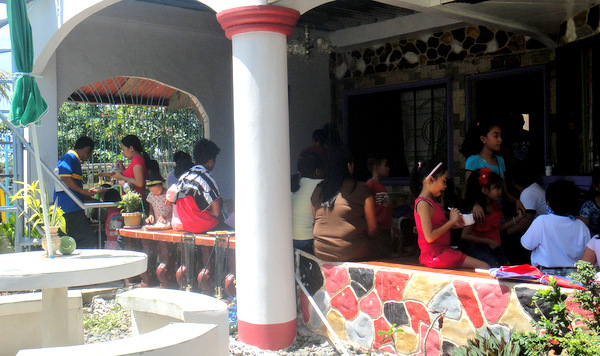 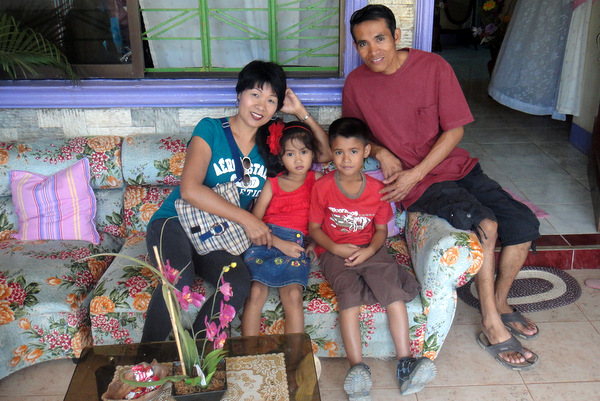 In the photo above, far left, is my asawa. Seated next to her is our little niece JalAmiel and her brother, our nephew Jorreal. Papa, our brother-in-law, Joery,  is on the right. Alida, Melinda’s sister and Joery’s spouse, joined the party later.

Spent a few hours in what I dubbed the “beer garden.” See the lead photo with my three amigos where I’m sporting my clown smile. I had consumed a few bottles of Red Horse by then and picked up a good tip from the Filipino married guys drinking with me. When their asawa stops by and asks how many bottles they have had, they always hold up two fingers no matter how many brews they have consumed. I was foolishly keeping my own wife updated with the latest accurate figures but plan to take the advice from my new Filipino friends at future events. Final count? Five. More than enough for a good buzz.

Lechon, roasted pig, a traditional Filipino dish at big gatherings was served. Check out the following “before” and “after” pictures. 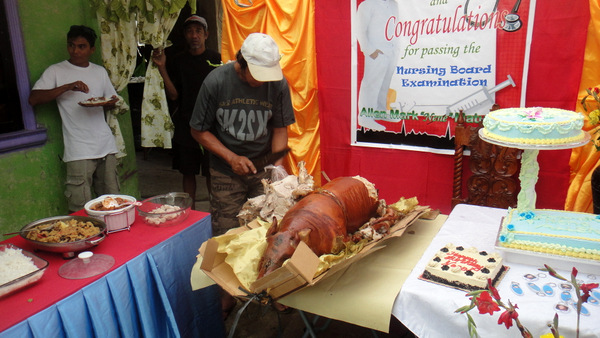 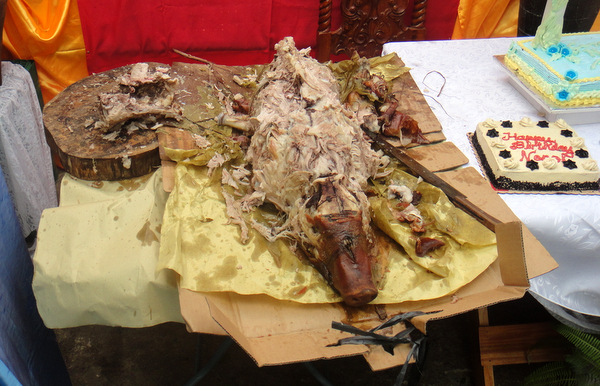 Of course, a lot of the pig also goes into making other dishes. I stuck with rice and big hunks of lechon. And they used a super-sized wok to prepare the rice in. It’s shown in the next photo. 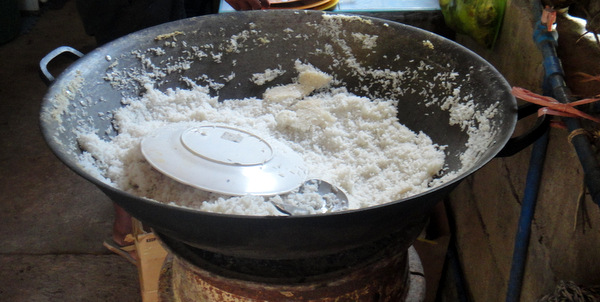 While I concentrated on drinking my beer, my poor asawa was in the kitchen helping out. The following picture is a bit out of focus. Remember, I was drinking Red Horse at the time.  Great party with good friends on a beautiful, breezy day in the sweet mango province of Guimaras. A terrific way to spend a day of retirement with hopefully many more to come. And another example of why it truly is more fun in the Philippines. 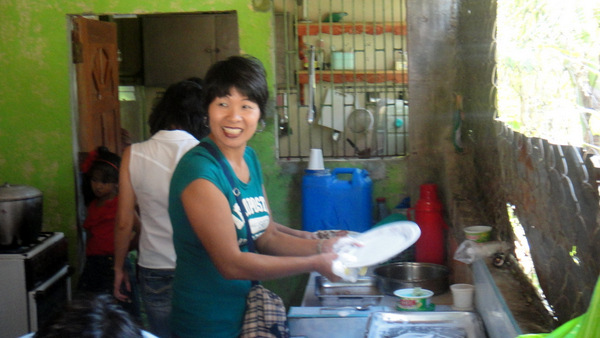