Enjoyed a recent visit from a future American expat that will be living in the Philippines. The Sainted Patient Wife and I had the pleasure of meeting Steve and his lovely asawa, Loretta, at The Moon Cafe in Iloilo City. 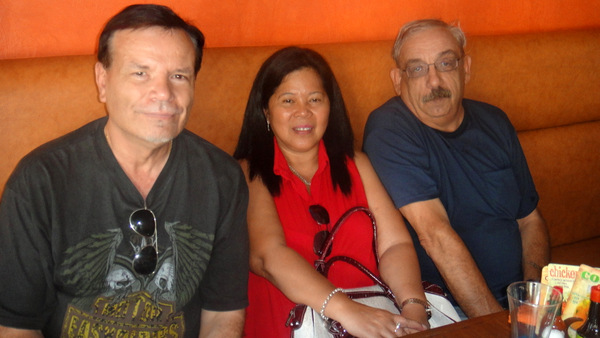 Steve is planning to retire to the Philippines and has been a longtime supporter of this website. His past donations to this site are sincerely and gratefully appreciated. He also  sprung for lunch and a few bottles of San Miguel Pale Pilsen served in frosty mugs. That’s always a treat for a retired American expat like myself living in the Philippines.

Steve lives in southern Arizona and works for a defense contractor. He’s retired from the Army but has no immediate plans to move to the Philippines. He enjoys his work.

If I had not been so bored with my job at AT&T the last couple of years I spent there, I might have been inclined to stay on until I reached 62, the age I’m going to collect my Social Security.  But as regular readers of this website know, I left Ma Bell after almost 30 years of service at the tender age of 57. Several months later my lovely asawa and I moved to Guimaras in the Philippines.

Steve was on vacation and made Iloilo City one of his stops. He’s checking out different areas of the Philippines before he makes his actual move. That’s a wise decision.

Most expats will agree that it makes sense to look around at different locations that you think might make a good place to live. Check them out. Look around. Get a flavor for the region. 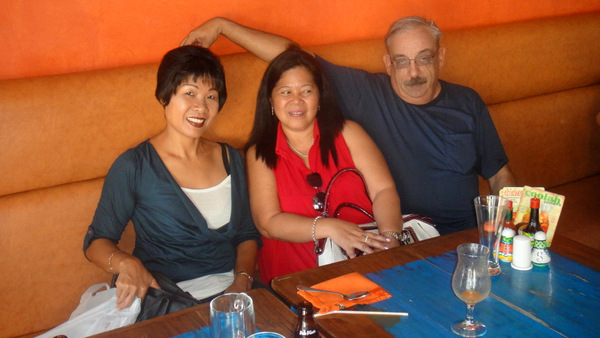 The future American expat and I headed outside The Moon Cafe after lunch as we left our spouses in the air con restaurant to chat. It was a sunny, breezy day and if you’re going to catch a few puffs on a cigarette and drink a few bottles of San Mig, this is a great venue for that.

I was impressed with Steve’s knowledge of the present events in the Philippines. He keeps well-informed. We talked for a few hours until my new friend noticed our spouses coming outside. I had to pick up a few items at the nearby SM City Supermarket so we thanked Steve and Loretta for the meal and the drinks.  The couple caught a Light of Glory cab for the ride back to their Iloilo City hotel.

The Sainted Patient Wife informed me she really enjoyed talking with Loretta and that she was an extremely nice person. I can certainly say the same about the future American expat to the Philippines, Steve. Enjoyed his company and appreciate all the help he has given this website. Hope to visit them when their big move to this archipelago is eventually made.

Like my last visitor from the States, Papa Duck, Steve has an abundance of common sense. And that’s the main ingredient for anyone wanting to live in the Philippines. Or anywhere else for that matter.