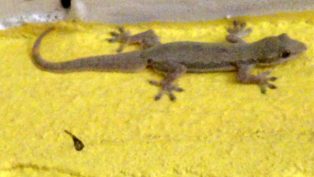 Lizard Poop. It’s not much of a problem in our Iloilo subdivision home as it was back at “The Compound” in Guimaras where we formerly resided. Of course, I’m not the one cleaning up the crap. My asawa, who asked me not to take her photo (see next picture), was busy the other day with a brush (that looked like a toilet bowl brush to me) cleaning out our windowsills. 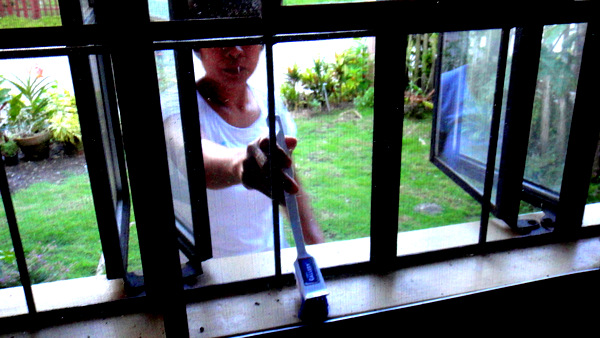 The few  poop pellets you see in the following pictures doesn’t compare to the mess we had when we first moved into our home in “The City of Love” last October. My spouse almost needed an end loader to clean that mess up! It looked like that no one had cleaned up that pile of lizard poop in years. I believe a group of single guys occupied our rental home before us. That would explain the droppings left.

Lizard poop reminds me of mouse turds. Check out the next two pictures to get an idea of the average size of lizard leftovers in our home. I’ve using a one peso coin for comparison. 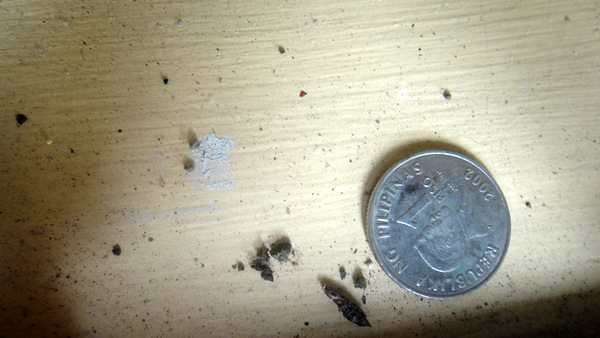 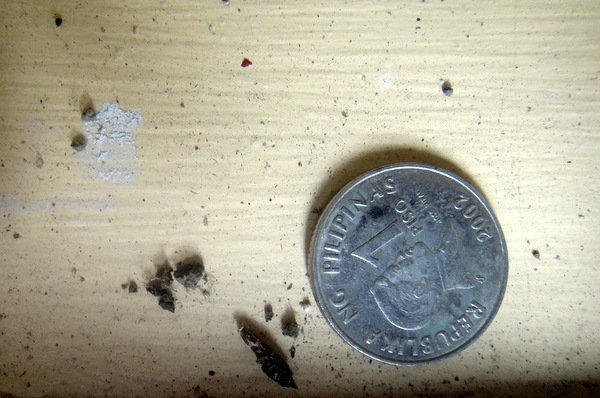 We don’t have near the amount of lizard poop that we had in Guimaras due to the fact that our rental home in Iloilo has all the windows screened. Droppings would cover the kitchen counters of our home in the mango province. The only screened room in the house was our bedroom. It was still a battle fighting lizard that would sneak in from other rooms.

Why not put screens in? We weren’t going to stay in our home in Guimaras and didn’t want to go the expense of installing any. You can bet that our new home that we are planning to build will have every window screened.

A lizard occasionally sneaks into our current house. There was one that was leaving its mark on our kitchen table but I haven’t seen any evidence of the pest in the last couple of days.

With the high ceilings we have, throwing a slipper is the favorite method of bringing the lizard down. If you’re lucky enough to hit one and knock him to the floor, then you smack the crap out of him with your slipper.

If my asawa is nearby and doesn’t know I’m lizard hunting, the abrupt slapping sound from my footwear can scare the crap out of her, too. I have to be careful that she doesn’t have access to her super-duper lizard brush  when that occurs. Otherwise, she might just slap me upside my  head with it. Thankfully, her bolos are still in Guimaras.

2 thoughts on “The Lizard Poop Brush. An Essential Item in Every Filipino Household”