Recently did a post about Boracay being named the world's best island destination when I saw a news article proclaiming an island in Palawan anointed as the world's best. Ariara island, located 160 miles southwest of Manila, ranked first in the Top 100 holiday destinations in the British edition of Vogue magazine. (photos from Ariara Island website.) 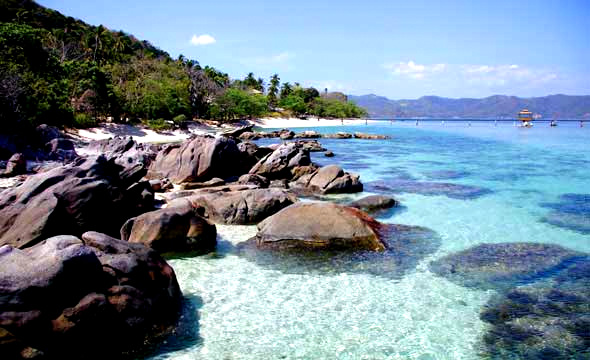 ABS CBN newscom  quotes Tourism Secretary Ramon Jimenez Jr.: "What is remarkable is that the entire resort is a testament to the unique artistry and skills of Filipino designers and artisans. The use of local materials and traditional techniques serves as good advertising for Filipino craftsmanship and world-class products.

Tourism is not just about counting tourist arrivals. More importantly, it is about building opportunities on the ground and improving lives, in communities in very real places."

This "private paradise" has only eight spacious villas and beach cottages. All furniture used here are made by Filipino carpenters and craftsmen using indigenous materials.

A UK publication,  "Times Magazine," described  Ariara as the "Best Private Island Resort," and described it as a "Philippine Island of such prettiness that you'd almost expect Johnny Depp to pop out with a parrot on his shoulder."

Other British magazines have also praised this paradise in Palawan. Independent magazine said Ariara is one of the best islands to visit this year. Angels and Urchins, Harrods Magazine, Harper's Bazaar, The Spectator, Wine and Dine, Urbanollogy and Tatler have also featured this spectacular  island resort in the Philippines.

The UK brought 104,466 visitors to the Philippines in 2011 according to the Department of Tourism.