Brownouts in the Philippines, including Iloilo where we reside, are as common as cockfights. You might be in the middle of checking to see if you have any new Facebook friends on your pc,  watching your favorite rerun of Darna on the Fox Filipino channel or sitting in your favorite   talabahan   enjoying a brew (or two) when the lights go out. 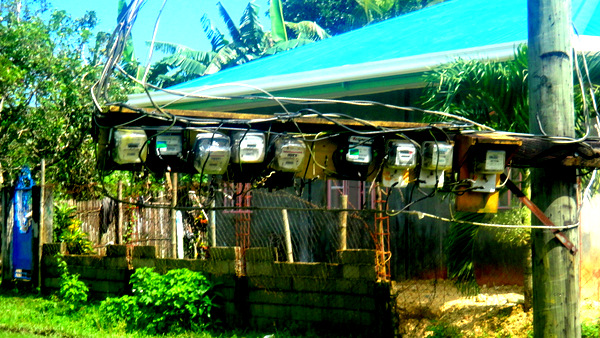 It's frustrating and bothersome at times. We've had more brownouts  in Iloilo compared to the number we had when we resided in mango land, Guimaras. It's something you learn to live with. Even "paradise" has it's pitfalls. Just ask Adam and Eve.

The "power" company for Guimaras is GUIMELCO. I started keeping a brown out log in September 2010, almost 14 months after moving to this rural province in Western Visayas. From September 2010 through September 2011, our last full month we resided there, we experienced an estimated total of 73 brownouts. That's an average of 5.6 brownouts per month in Guimaras.

Each outage in our former home lasted an average of 54.6 minutes, close to one hour each. Only one brownout in February 2011 lasting for 31 minutes. The month with the most power failures, 12,  was September 2011. That month had the longest single outage of 13 hours and 52 minutes on Tuesday, September 27.

Our "power" company in Iloilo for our particular subdivision is ILECO, the Iloilo Electric Cooperative. We've already had a total of 44 brownouts in Iloilo since moving here in late October 2011. Each outage averages 124 minutes in length or almost twice as long as the brownouts in Guimaras. Already nine brownouts this month as of June 20 plus two major outages in early 2012 lasting around 12 hours each.

Here's a related story regarding ILECO, published in the March 4, 2011 online edition of mb.ph.com:

The SPC Island Power Corp., formerly Salcon Power Corp., has agreed to supply electricity to the Iloilo Electric Coop (ILECO) 2, which is expected to end frequent brownouts that affected some 85,000 households in 14 municipalities and one city in Iloilo province.

The agreement was formalized in Cebu City recently with the contract signing ceremony attended by top officials of the two power firms that include Dennis T. VIllareal, president and CEO of the SPC Power Corp., and Vicente A. Paranpan Jr., president of the ILECO 2.

In line with the agreement, SPC Island Power Corp. has committed to supply a total of 25 million kilowatt hours in a span of five years to ILECO 2.

It can be recalled that ILECO threatened to sue the National Power Corp. (Napocor) last year because of the latter’s failure to provide the power needed by the cooperative as specified in their service contract. The power coop carried out rotating brownouts that lasted four hours.

That agreement with SPC hasn't ended our frequent brownouts, and I don't look for things to improve in the near future. In fact, the records I'm keeping show the situation worsening. At least Guimaras has a progressive plan of action with windmills being installed on the mango province to help alleviate their power shortages. In contrast,  Iloilo has been opening less environmental-friendly coal plants.

But that's the price you have to pay for living in paradise. My asawa didn't even had electricity back at her home place in Guimaras when she was growing up. Only pythons hanging in the back yard. I think I'd rather have the brown outs.