Scott B and I had dropped by The Shirven Hotel in Guimaras. I wanted to see if my two favorite staff members, Mae and Maricel, were on duty. Mae was gone for the day and Maricel was going to be in later. I had told my asawa, who was visiting her family at "The Compound," to meet us at Lisa's Talabahan. I asked her to please text the  "Tom Cat" and his girlfriend LenLen (my wife's relative) to meet us there, also. 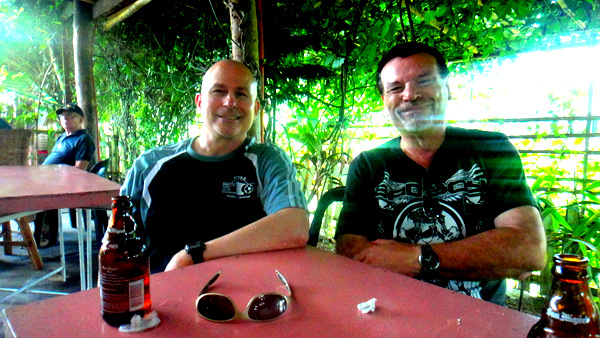 Walked into our favorite oyster bar in Guimaras, and saw a group of Filipinos huddled around the television watching a NBA Finals game between the Heat and Thunder. I didn't even know Oklahoma had a NBA franchise.

Scott B is a big sports fan so we got a table near the TV. It was around 10 am, late enough for me to have a San Miguel Pale Pilsen. My American expat friend passed. I had my back to the game, nursing my Pilsen.

It was getting hungry around 11 am, my usual lunch time. Tom hadn't arrived yet so I ordered three sticks of grilled pork and one chicken thigh along with another beer.

The game was almost over around noon so Scott and I decided to head back to "The Compound." Couldn't understand why Tom hadn't arrived yet, but maybe he was caught up in some duties over by the Trappist Monastery in Guimaras where he serves as an oblate, lay person.

As we walked by Cousin Emma's Jade Market on the way to my asawa's place, my American expat friend and I heard a chorus of Filipina voices yelling "Hi, Joe!" I  kept walking. My asawa is related to half the population of Guimaras, and I had a hunch the girls yelling at us from an upper story window were some hookers that worked at a nearby bar my wife had told me about. 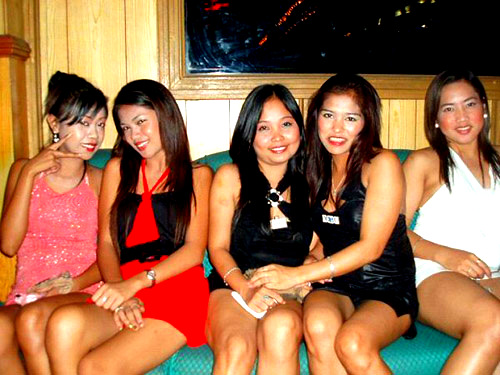 Scott B, the single guy without any girlfriends or relatives nearby,  shouted back at the girls. But he wisely continued on with me back to our muddy, cow poop-laden subdivision road. Met my nephew, Jorreal, who was catching a trike back to school after his lunch at home,  and niece Michelle, who was escorting him. I said hello and also gave him a 100 peso note like I had earlier given to his sister, JalAmiel.

Stepped through the gate to our former home and went to the nipa hut in the front yard where my asawa was. I asked her if she had sent a text message to Tom to meet us at LIsa's like I had asked. No text was sent. She thought SHE was supposed to meet us at Lisa's and that we would go to The Farm and see Tom and LenLen after that.

After over 12 years of marriage, I knew there was no point in arguing this simple misunderstanding. Our twin nieces and my spouse,along with Scott and myself,  hopped onto a tricyle parked outside our gate and headed for Tom Cat's place. It was raining hard but Scott and I stayed in the rear of the trike as my wife climbed onto the motorcycle, umbrella in hand. My twin nieces sat up front in the trike cab. 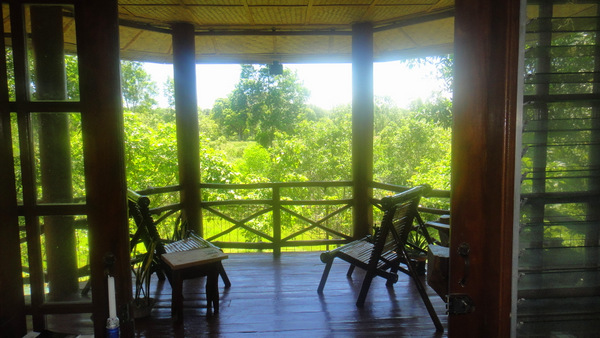 Made it to "The Farm" relatively dry. I hopped out, paid the driver and yelled out: "Tom Cat! Tom Cat!" My American expat friend made his appearance, disheveled and wearing dirty clothes, he had been working on a new furniture project.

We stepped in, greeted Tom's lovely companion, LenLen, and I introduced Scott B. Made a quick tour of the house and chatted with the Tom Cat. Tom said LenLen had called for a couple of tricycles to take us to Lisa's for lunch. Everyone else but I had eaten lunch. We soon  heard the sound of  approaching tricycles.

We hopped on and headed back to Lisa's Talabahan where we chowed down and had a few beers. Scott B, my asawa and twin nieces walked over to the jeepney dispatch area and caught a ride to the Jordan wharf in Guimaras and hopped on a pump boat back to Iloilo. A good day with good friends and giving creedence to the slogan: "It's more fun in the Philippines!"

16 thoughts on “Frisky Filipinas and The Tom Cat”