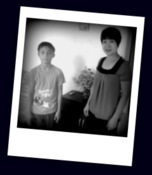 Sharwen will be 13 next week. He's our nephew that lived with us in Guimaras along with his older sister, Shaina, 14, and both have recently moved in with us at our home outside of Iloilo City per their mother, Marjorie's,  request. Marjorie has been working as a domestic helper in Kuwait and wanted her children to live with their Tita and Tito (aunt and uncle.)

I'm known as "The Enforcer." My asawa, "The Sainted Patient Wife," might look sweet and innocent but is as tough as nails and swings a mean bolo.  A recent incident in Guimaras involving peer pressure from some "friends" of Shaina and shots of Tanduay Rhum prompted the move. The kids needed some "tough love" supervision. We're just the couple to supply it.

Marjorie also told my wife that she wants her son to be circumcised. It's even painful for me to write those words. I had previously covered this topic on an earlier post, "It's Circumcision Sunday in the Philippines."

My two nephews in Manila, Geo, 10 at the time, and Gerwin, 13, had the procedure done when my asawa and I were staying at their home last May. Poor Geo was in quite a lot of pain for several days. The stoic Gerwin refused to show any discomfort at all. He played the "macho" role to the hilt.

As my Filipino readers already know, circumcision, or "pagtutuli," is a traditional custom in the Philippines. Thankfully, that was NOT the practice back in Central Illinois where I grew up in the 50's.  Infant circumcision peaked in the United States in 1964.

Sharwen's mother desired her son to be taken to a healthcare clinic to have the procedure done during this summer vacation. I didn't have the balls to give the news to Sharwen so I left that up to my asawa. He doesn't understand half of what I say anyway. Or at least pretends not to.

So the other day my nephew and his tita headed out for Western Visayas Medical Center in Iloilo. Shina stayed behind. It was Tuesday, a water re-stocking day. My asawa doesn't feel I am capable of handling this chore and stripped me of it some time ago. That's OK, I didn't protest the fact that my niece would be taking care of the job. Frankly, it didn't hurt my feelings one iota.

Couple of hours later I get a call from my spouse. She's at the healthcare clinic but the numbers for the morning appointments have already been handed out. She'll have to return after lunch and hopefully snag a number for an afternoon appointment.

In the Philippines, many times a doctor's office or hospital will not assign any set times. It's "first come, first served." I was extremely glad that I did not have to tag along. My limited patience would have been sorely tested.

As I'm "slaving away" working on this website and sitting with a fan blowing directly in my fat face with my Jango Internet radio turned up full blast, I faintly hear my wife's cell phone that she left behind for me ringing.

I go into the other room to answer it, and my spouse informs me that after eating lunch at a nearby Mang Inasal, my wife had gone back to the hospital, gotten a number, and finally reached a receptionist who informed her that all circumcisions for the season were closed. There would not be any more scheduled until this December!

I'm sure my nephew was happy about that news. His pee-pee had gotten a reprieve. I was upset that my wife had spent all day at the healthcare clinic only to find out the procedure couldn't be done. There's a reason I call her "The Sainted Patient Wife." I would have blown a gasket.

10 thoughts on “Sharwen’s Pee-Pee Gets a Reprieve”