The Manggahan Festival in Guimaras is always one big party in this rural province located in Western Visayas. This is the third year in a row I've attended the festivities with my asawa, and it's one entertaining shindig from start to finish. 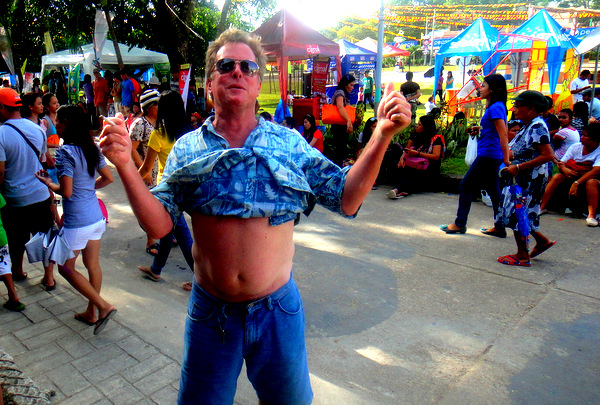 This annual celebration of the sweetest mangoes in the world (that's according to the Guiness Book of World Records) is the highlight of the year for this small province of just over 151,000 people which is ranked 73rd out of 80 provinces in the Philippines for population and 76th out of 80 for area. (sources: Wikipedia.)

The official sponsors of this year's festivities were Pepsi and San Miguel. However, Coke is king in the Philippines (the soda that is) and products from the San Miguel Brewery rules this archipelago of 7,107 islands. You will not see any other beer served at this bash. But I ask you, is there any other beer but San Miguel?

And when you mix beer and people together and add some loco loco Americanos, you're likely to find a character like "Fearless Frank" from Florida. The 54-year-old is on vacation and staying with our mutual friend, the former "Brother Tom" who now simply goes by the moniker "Tom." I am calling him "Tom Cat," (original, I know) because everyone in the Philippines has a nickname.

In the first photo you'll see Frank imitating a favorite custom of many Filipinos, lifting their shirts to reveal their bellies. Unfortunately, cute Filipinas do not share that tradition, unless you find yourself at a local KTV bar where you'll find more than bare bellies being displayed.

Actually Frank's stomach has shrunk considerably since he's arrived in the Philippines a month ago. He has lost 60 pounds as he tries to battle the heat and humidity. By the time he returns to Florida (he's extended his tourist visa to stay a month longer than planned) Frank's  going to be thinner than an Amish phone book. 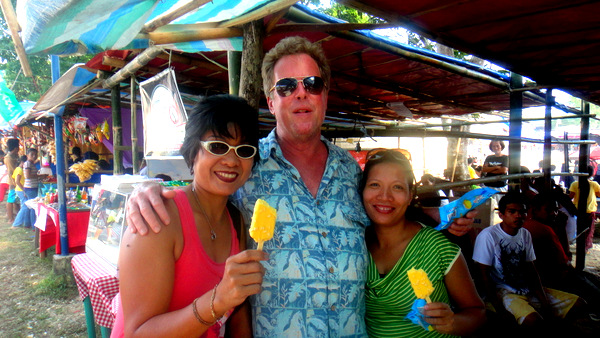 We enjoyed some sweet corn ice cream from a vendor at the Manggahan Festival. That's The Sainted Patient Wife on the left.  Frank's friend, Giselle from Iloilo City, is on the right and was able to join us that day. My asawa and I both like Frank. He calls my spouse "the Japanese beauty"  though she is Chinoy,  Chinese-Filipino.  My wife doesn't care.

And the sweet corn ice cream? Surprisingly good and quite refreshing on this hot day with temperatures in the upper 80's. The Filipina pictured below had an assortment of treats from Magnolia, one of the favorite ice cream brands of the Philippines. 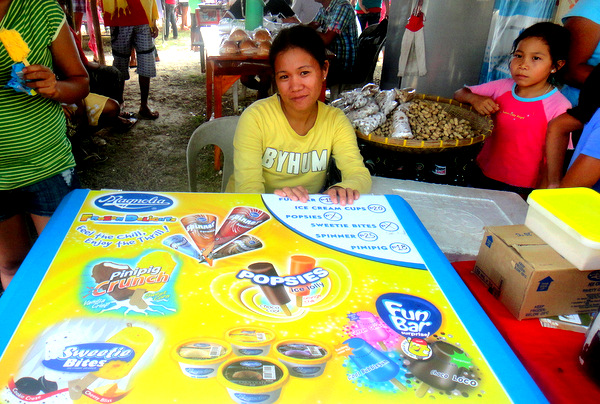 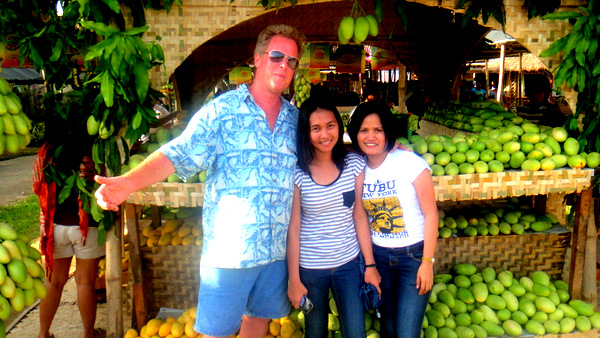 Frank could be called a  "chickboy." While the term has different meanings in the Philippines it  is a visayan slang term for a guy that likes to flirt with females and is attractive to many  of them. Here's the gwapo (handsome) American posing with some cute Filipinas at one of the numerous mango stands found at the festival.

Now Frank believes that I "blend" in here because I have dark hair and dark brown eyes. The misguided American thinks since he has blond hair and blue eyes he stands out more. I found it necessary to stop the ladies posing with Frank and ask them if they thought I was Filipino or Americano. "Americano" was the answer. 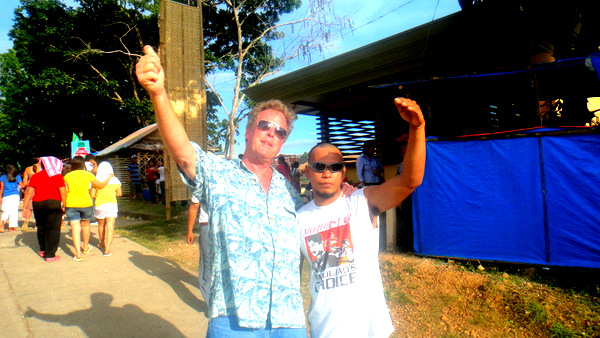 Frank is pictured in the above photo with his  preferred  tricycle driver, Mario. Since Tom's farm is located quite a distance from the festival and any shopping facilities in Guimaras, a reliable trike driver is a must. Costs P10 each for a ride.

Frank, Tom and myself headed out to the "New Site" in San Miguel the other day so Tom could purchase a new fan. At least a 40 minute walk in the hot sun. Needless to say, we took a trike ride back to Tom's place after a stop at Lisa's Talabahan for some cheap food and cold bottles of San Miguel Pale Pilsen.

Couldn't find a reasonably priced fan at CitiAppliance so we dropped by Madison Furniture located near "The Crossing" at the "Old Site," just a few minutes walk from the festival grounds. Frank had his picture taken with one of the cute Filipina sales associates working at the outlet, Judith. 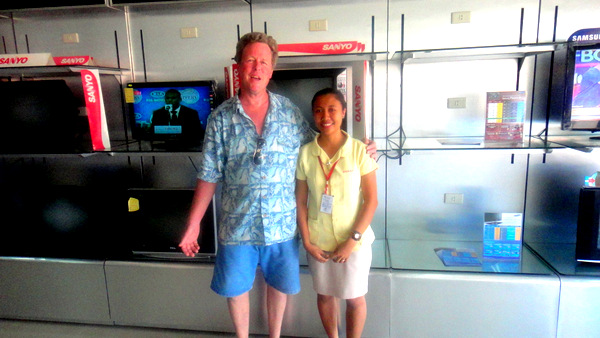 More adventures from the Manggahan Festival in Guimaras coming up (the festivities run from April 15-22 this year.) Partying with the Peace Corps, the revelation of Red Horse's "Happy Horse," and my first run-in with a drunken/stoned local Filipino that I had to chase away from our table. Always "more fun in the Philippines."