Palawan. One of the most beautiful beach resorts in the Philippines. Our niece, Luz Maria, seen in the next photo with my own pretty pinay, my asawa, lives there and visited Iloilo the other day.  We didn't know she was arriving on Panay Island, where we live, but the cute Filipina was in nearby Antique Province visiting a friend , and met us a week ago Saturday at Langfords behind SM City. 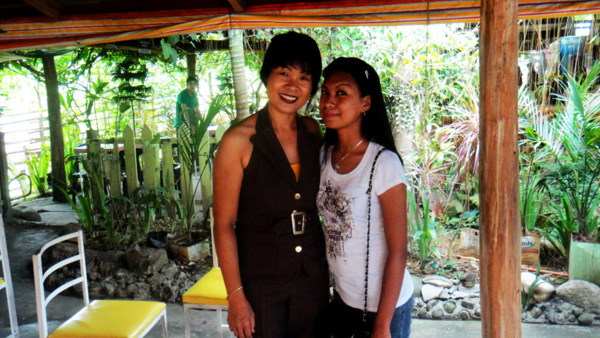 Luz Maria is engaged to be married to a Belgium gentleman that she met while employed at a Palawan resort. Her fiancee is filing the necessary Fiancee Visa papers in his home country where they will be married.

This is the first time I have met our niece, and my spouse has not seen her since 1990. We recently met her mother and father, but their daughter was not with them at the time.

I was having a "few" bottles of San Miguel Pale Pilsen and an order of fish and chips from Langfords with my friends, Jeff, the self-proclaimed "Crazy Cano.". Our French Canadian amigo, Fergus, joined us later (see the following photo.)

Our Canadian expat friend has a website  that has some terrific pictures of historical churches on Panay Island and detailed information about them. With the Lenten season upon us, it would be a great time to check out his site. 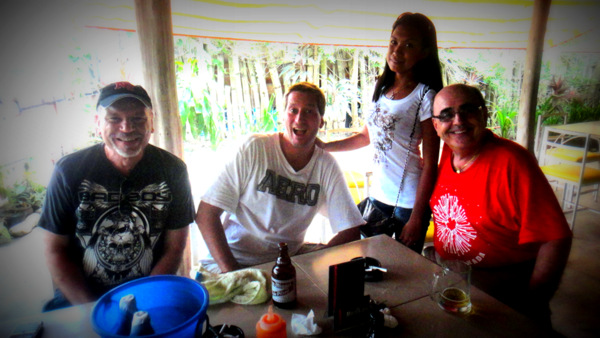 Jeff has now planned bi-weekly meetings at Langfords, every Wednesday and Saturday at 11:30 am. If you have some spare time and would like to have some cold brews (or Cokes) in addition to some good food, stop on by. Don't be shy. Just drop by our table. Asawas are encouraged to attend. My  beautiful wife and Rose, Jeff's lovely spouse, get together and after lunch,  do some window shopping at SM City.

Jeff's monthly expat meeting will be held  Friday, April 13th, at Langfords. Future monthly gatherings will be held the first Friday of each month in addition to the weekly meetings. All English-speaking expats are welcome. The "Crazy Cano" is in charge. Jeff's a big guy. We don't argue with him.

But back to our niece, the pretty pinay from Palawan. I remarked to her that she was even more beautiful in person. I had seen pictures of her before, but rest assured, her future Belgium husband is one fortunate guy (just as all of us kanos married to Filipinas are.) 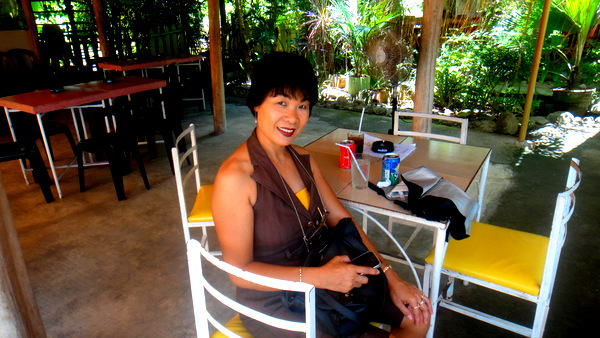 Luz Maria had trouble understanding my rapid-fire English slang. I try to make it a point to talk slower sometimes, but since I already consumed a few bottles of San Miguel, I had forgotten to do so.

Our niece only spent a short time with us at Langfords as my asawa and her went back to SM City in Iloilo to continue their shopping. Luz Maria's shopping companion from Antique was waiting for her, so the guys just continued enjoying their liquid refreshements.

We hope to travel to Palawan sometime and visit our niece and my brother-and-sister-in-law, but it was great to talk to Luz Maria in person. I wouldn't mind traveling to one of those beach resorts that Palawan is famous for and checking out how the San Miguel Pale Pilsen tastes there!

NEXT UP! SCOTT H : "DRIVING IN COMBAT MANILA!" 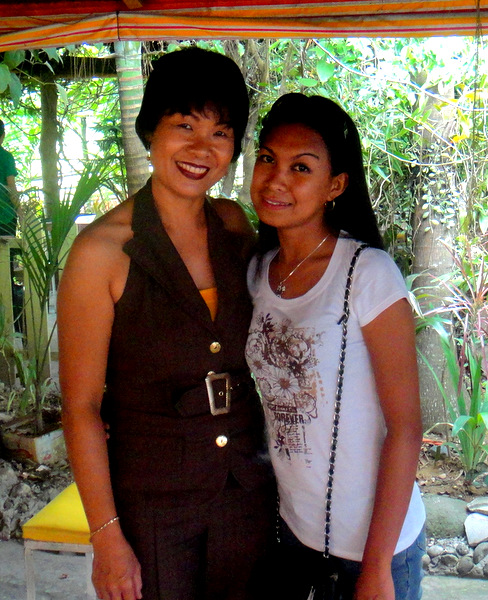 8 thoughts on “The Pretty Pinay from Palawan”