Heard my asawa's manicurist outside my window the other afternoon. She stopped by to give my wife the latest news in our subdivision. She  has access to the lastest breaking chiz miz, gossip, available as she makes her rounds. When my wife came inside to inform me that "Madge" (not her real name) told her that an aswang, a Filipino witch, attacked a barangay police officer right outside our subdivision, I took notice. 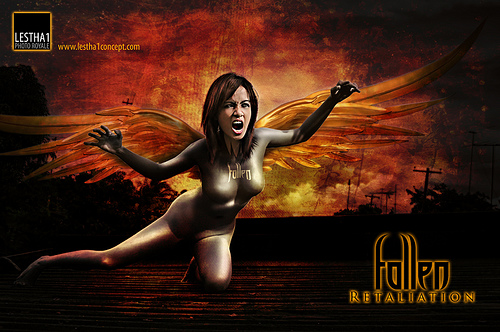 I would imagine that the above conversation is not something the majority of my readers have had with their asawa recently. I took it in stride. I published the story of the aswang that attacked my wife's family home in the nearby rural province of Guimaras a couple of years ago.  I'm familar with that particular brand of Filipino witch.

For the uniniated, sightings of aswang, or "tik tik," are quite common in the Western Visayas region where we reside.  Aswangs are shape shifters, usually winged females with a long nose, and have been seen changing into pigs, dogs, cats or chickens.

The creature that attacked my asawa's family home changed into the form of a cat. They are especially fond of eating unborn fetuses and small children and have a craving for human livers. They roam at night. During the day they look just like ordinary Filipinos.

I can assure you that I have not been drinking huge amounts of San Miguel Pale Pilsen as I write this. My wife is convinced that these witches exist. So when "Madge" returned to slap some polish on my wife's fingernails and toes, I was anxious to hear what she had to say about this latest aswang sighting.

This was the second time this particular woman had attacked the tanod, sentries of the barangays (local government units, villages) while the peace officer was on his night patrol. They are akin to neighborhood watch patrols in the States.


The assaults took place just outside the barangay of our subdivision. After the second attack, the tanod rushed to his mother's home to retrieve the tail of a stingray knowing that will ward off the creature. He grabbed the stingray tail and with another tanod, managed to get the aswang into a tricycle to escort her to the nearby main police department in Iloilo.


She was extremely strong, according to my wife's manicurist, and put up a terrific battle despite the lashing she was getting from the stingray's tail.

The tanods managed to drag her into the police station. By that time, the woman's daughter had arrived, pleading with the officers to release her nanay into her custody. She told the police that her mother had recently suffered a nervous breakdown and had been behaving erratically.


The Iloilo police released the alleged aswang much to the chagrin of the local barangay peace officers. My western mindset accepted this as the most logical explanation for the "aswang" attack, until my asawa informed me that the woman that had assaulted the tanod used to live nearby just blocks away from us.

The local pig slop boy makes the rounds on his pedicab every morning in our Iloilo subdivision and collects leftover food scraps that residents do not want and feeds it to his pigs. Early one morning in the dim light of dawn, he was startled when he heard a loud thud on the roof of the house he was standing in front of.

He saw a cat on the roof hissing and witnessed that feline changing into the shape of the same woman that had attacked the tanod! She had transformed right before his very eyes!

The young man screamed and fled as the aswang made threatening gestures to him on the roof. He did not want to become her next meal. The surrounding neighbors heard the commotion and word quickly spread.


A young pregnant woman neighbor quickly packed up her belongings and left the neighborhood. Other residents soon followed. The aswang eventually moved with her daughter to their present location just outside our own subdivision in Iloilo. To this day, that block contains numerous empty houses. My own spouse and I have gone by there many times on our nightly walking excursions.

So the next time you see a cat on roof, take notice. You might just want to carry your own stingray tail with you to be on the safe side. And if you don't have one available, offer the aswang a San Miguel Pale Pilsen and hope she doesn't prefer San Miguel Lite! You might just lose a liver! (Which you will anyway if you keep on drinking too much.)