Our world was rocked by a major earthquake this past Monday while my asawa was shopping for bed sheets on the third floor of SM City in Iloilo.  Thanks to the exceptional handling of the evacuation by SM management and security, my asawa and I, along with hundreds and other customers and employees were led swiftly out of the building without injury or mishap. Now we just had to get back to our home in a subdivision two jeepney rides away. That proved to be extremely difficult.

But getting home was a minor issue in light of the lives that were lost near the epicenter, 65 km (40 miles) WSW of Cebu.  Guihulngan City, in the province of Negros Oriental,  was hit by a landslide brought about by the magnitude 6.9 earthquake that struck at 11:49 a.m. Monday morning in what appears to be the strongest earthquake to ever hit Negros.

At the time of this post, the official death toll had reached 26, but with at least over 90 people still reported missing, many of them in landslides that buried homes, the death toll is expected to rise.

According to a report in The Visayan Daily Star,  Jose Agustin Molas of the Philippine Institute of Volcanology and Seismology Seismic Station in San Antonio , the main shock lasted for about 402.32 seconds or 6.7 minutes from start to finish based on the seismograph recording. However, people interviewed said they felt the tremor from less than a minute to up to two or three minutes depending on their location. 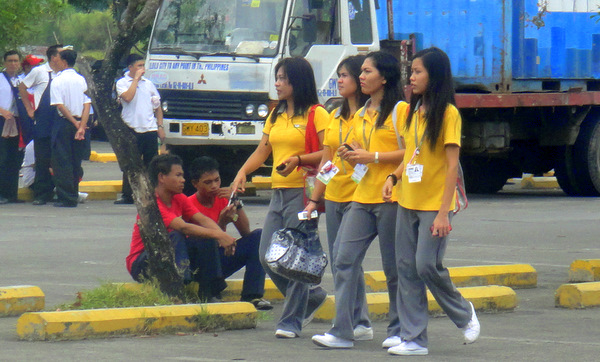 I checked my watch when the third floor of SM City in Iloilo started to violently shake, and my own personal estimate of the time I felt the tremor was around 2.5 to 3 minutes. Never had experienced an earthquake before of that intensity. My asawa,  had been in a major quake that registered at 7.6 while employed in Taiwan as an OFW, Overseas Filipino Worker, and which killed over 2,400 people. Her employer's residence was on the 11th floor.

Found a jeepney in front of SM City that would take us to our first stop near the  Sarabia Manor Hotel and Convention Center on General Luna Street  which was slightly damaged during the earthquake.

A steady stream of cars, taxis and jeepneys passed by us on  General Luna Street . Four fully-loaded jeepneys going to our subdivision sped by. Since students had been let out of their classrooms early, parents that had private vehicles were scrambling to pick up their kids.

Dozens of cabs packed with passengers zoomed by. After over 90 minutes, a packed jeepney headed to our home actually stopped. It picked up two people that had been waiting just a few meters away from us. I went up to the driver, and he motioned that the vehicle was full. I mumbled some choice words and walked away.

A slight drizzle started. My asawa and I went down the street, hoping to separate ourselves from the massive throng of people standing near us also waiting for a ride. I hoped that we could find any empty cab. A large-sized "rich" Americano should be easy to spot, so I thought. Any other time the cabbies are on us faster than  a fixer at Immigration.

After about 15 minutes a taxi pulled into the bank parking lot we were perched at. After the passengers unloaded, I opened the front door and asked the driver how much to our subdivision. "300 pesos" he said (seven US Dollars.) "Nope, too much," I replied closing the door and walked back to my asawa.

250 (5.91 USD) pesos is the going rate to get to our place. It's always "off meter," but since we are located so far out of the city limits and usually only have to use a cab for our monthly grocery shopping trip, I have learned just to accept this fare without too much grumbling.

Now The Sainted Patient Wife herself was losing patience at this point. It had been over two hours since we had left SM City, and she was getting increasingly frustrated. It normally takes about  30-40 minutes to reach the main entrance of our subdivision, and the longest we've had to wait before for a jeepney was 15 minutes.

But five minutes passed and an empty cab pulled alongside us. My asawa, upon my instructions, asked how much. 250 pesos. We hop in and our driver navigates his way through the heavy traffic.

We arrive home and thankfully do not find any damage done to our residence. More aftershocks hit us later in the evening, one registers at 6.2, but we finally drift off to sleep, thankful to be alive.

Iloilo City did not report any casualties, but our hearts go out to the families of those that lost loved ones during this disaster. We knew that we could have just as easily been one of those that lost their lives if that epicenter had been a little closer to us. We were very grateful to be alive and well.