Monday, February 6, 2012. Iloilo. SM City. Third floor. 11:49 am. My asawa had already handed the cashier her SM Advantage Card and pulled out some cash to pay for an overpriced bed sheet and pillow set. I’m a few meters away, arms folded, not happy because I found another set 200 pesos cheaper with more pillow cases than her purchase. Of course, I’m totally ignored when I advise her that she should at least check out the linens I had spotted. I’m just the husband. But when the whole floor began to shake and rumble, differences of opinion over who has the better deal suddenly didn’t seem to matter anymore. 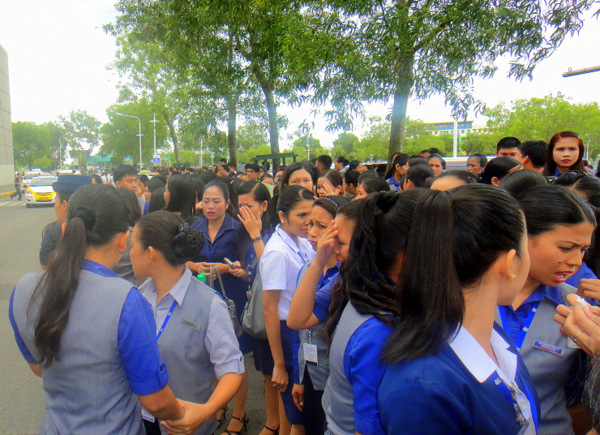 I instantly shouted “earthquake” as screams and cries for help erupted through out the third floor. The shaking intensified and dishes from the nearby housewares department  flew off the shelves and crashed to the floor.

My asawa was in a state of shock. She had  survived the Sept. 21, 1999,  7.6 Jiji earthquake (second deadliest quake in Taiwan history, killing2,415 people) while working as a caretaker and domestic helper for a family on the 11th floor of an apartment building in Taipei City as an Overseas Filipino Worker, OFW. My spouse started towards me but suddenly rushed back to the cashier’s counter!

The Sainted Patient Wife hadn’t been able to pay for her bedsheet and pillow case purchase yet. She must of wanted them pretty badly. The cashier said “Ma’am, Ma’am, it’s OK, it’s OK, just  go! Just go!”

I told Melinda to get down as I scanned the ceiling above us intent to get away from any light fixtures that could rain glass down on us. She crouched down beside me, and I held her as she loudly cried out: “LORD JESUS, PLEASE HELP US! LORD JESUS, PLEASE HELP US!” The sales associate that had helped my asawa with her purchase crouched down beside us. 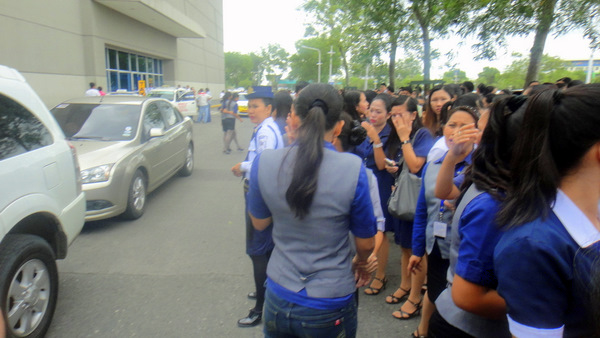 Little did I know that I had I had instinctively followed one of the recommended first rules when an earthquake hits, and that is to drop to the ground and stay away from light fixtures and glass. Having been through several tornado scares back in Illinois, that just seemed to make common sense.

Everything continued to shake and rumble around us. I checked my watch. I doubt that the whole earthquake event had lasted more than a minute or so, once the tremor had stopped I knew we had to get out quickly before the aftershocks kicked in. I asked my asawa for her camera as I wanted to get some quick shots of the interior, but a nearby sales girl had wisely directed us to the employee’s exit area and asked a security guard if we could use the stairway.

Of course the guard let us pass, and guided by SM management we joined the hundreds of employees escaping the building, but all done in an orderly fashion. I highly commend  the management and the employee staff at SM City in Iloilo. It was evident they had an evacuation plan in place, and they implemented it efficiently and professionally. I was extremely impressed by the actions they took during this emergency. 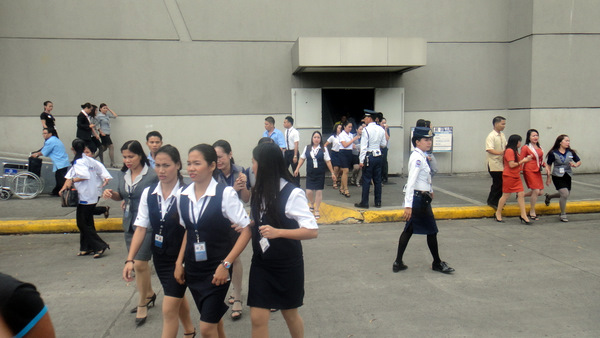 We stood in the back of SM City where employees from each department were gathered with their respective department. Hundreds of workers were still exiting the building.  A manager was shouting instructions through a bullhorn, but we were unable to hear what she was saying.

My asawa and I decided to stay and see if the mall was going to reopen. Of course that didn’t seem to make much sense because the threat of aftershocks was still possible. At 12:20 pm, about 20 minutes after we had made our exit, a collective scream came from the huddled employees on the parking lot as one of several major aftershocks hit. The wisest decision was to go home and forget about finishing our shopping no matter how badly my spouse wanted those new set of linens.

The magnitude 6.9 quake was tectonic in origin with a depth of 10 kilometers and with the epicenter located between Cebu and Negros islands, according to the Philippine Institute of Volcanology and Seismology (Philvolcs). The 12:20 pm aftershock was registered at 5.6. More aftershocks followed, with a 6.2 jolt at 6:10 pm that literally moved the computer chair I was seated on, and I weigh 200 pounds 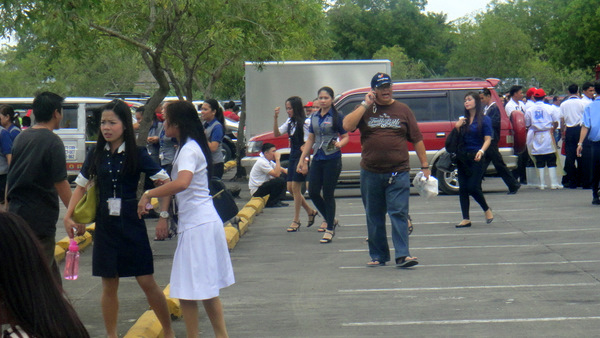 At the time of this post, at least 52 people had been killed during this earthquake as a result of landslides and collapsed homes, but that figure is expected to rise. 29 missing people in the quake-triggered landslide in  Guihulngan City, Negros Oriental, are  presumed dead.

I’ll have more on this story in the next post as we made our way out of the SM City parking lot  to try and reach our home. That was another adventure entirely as one huge traffic jam gripped Iloilo City as schools canceled classes and other offices closed. The aftershocks continue as I write this article, and we are keeping a vigilant eye on the situation. Those new bed sheets will have to wait another day.