Brother and Sister Reunited After 25 Years

Met my brother-in-law Amando and his wife, Marisa, a couple of weeks ago. That's him in the photograph, far left, standing next to my asawa, his sister. They have not seen each other since 1987, 25 years ago. Their son, John Paul, is in the foreground on the left along with their grandson. Between Amando's former job as a seaman with a company that fished off the Palawan coast, and my own spouse working before for years as an Overseas Filipino Worker, OFW, in Singapore and Taiwan, the two had not been able to  meet before this day.

My brother-in-law met his wife while employed as a seaman. Though the fishing company he worked for went bankrupt, he was able to find employment as a traffic enforcer near the city of Tay Tay in Palawan where he resides with his spouse and six children.  Amando has been threatened by angry motorists he has ticketed, but I can assure you,  he is not a man to be messed with.

My asawa had received a call from her brother when he arrived in Guimaras, where my wife's family resides,  for a vacation, only his second in over 20 years. He wanted to visit us in Iloilo where we now live.

The original scheduled date for the meeting passed without any word from Amando. Turns out he ran out of a load on his cell phone (many Filipinos use phone cards or "loads" from local sari sari stores.) He did not send text messages which are cheaper because he did not how to do that on his new phone (I can relate.) My wife could not reach him when she tried to call or text.

We knew Amando and his family were due to leave for Palawan in a couple of days and were aware they were departing on a passenger ship but did not know what company they were using. I thought it was a shame if they would not be able to see each after all these years, but I wisely stayed out of the matter and let my asawa handle any arrangements.

The morning before my spouse's brother was to leave, she received a phone call at 7 am. I was busy "working" on this website when she informed me that her brother and the family was already at the Jordan Wharf in Guimaras and were coming to Iloilo to visit us. She told Amando to meet us at the Robinson Mall. It was only a 15 minute pump boat ride to the Ortiz Dock in Iloilo, so we did not have much time to get ready. I'm a guy. I can be ready in five minutes. Not so with The Sainted Patient Wife.

An hour later and several applications of make-up (for the asawa),  we were on a jeepney to Robinsons. I was sure Amando was already waiting for us. The mall does not open until 10 am, and it was now only 9 am,  we walked over to one of the entrances, near Kentucky Fried Chicken, to try and locate her brother. Couldn't see him or his family. I had suggested calling him first to see exactly what entrance he was at, but that idea was brushed off initially by my wife (it just seemed  logical to me but what do I know? I'm the husband.)

So The Sainted Patient Wife finally puts in a call to her brother, but she runs out of a load become the call is completed. My asawa did find out her brother was at the entrance to Robinsons (but which one?), and she told him we were  by KFC. SPW did not know if her sibling had heard our location before the call was terminated.

Instead of doubling back a short distance to the MAIN entrance or staying put,   my asawa is determined to circle the huge city block which surrounds Robinsons and not listen to me again (you married guys know what I'm talking about.) 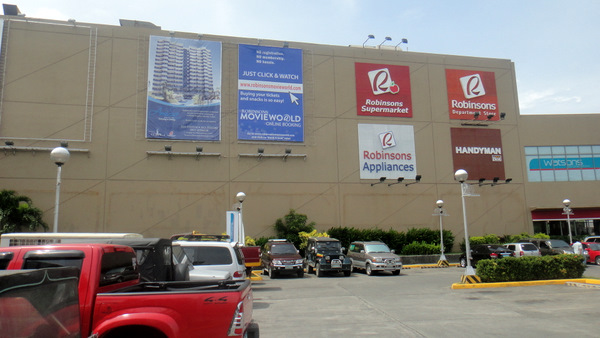 It was a hot and humid morning, and we were getting increasingly frustrated at not being to find my asawa's brother.  After about 15 minutes or so we returned to our starting point, Kentucky Fried Chicken, and of course Amando and family were in front of the chicken outlet waiting for us. He had gotten my asawa's message about the location.  I bravely remarked that we should have just stayed put (please note that my asawa's bolo is still in Guimaras.)

I spent most of time talking with Marisa as brother and sister were catching up on the past 25 years and discussing the current family situation in Guimaras. I asked Marisa if her daughter, Luz Maria (see next photo), was still dating the Belgium man that had met her during a visit to a Palawan resort she had worked at. She informed me they were engaged to be married. 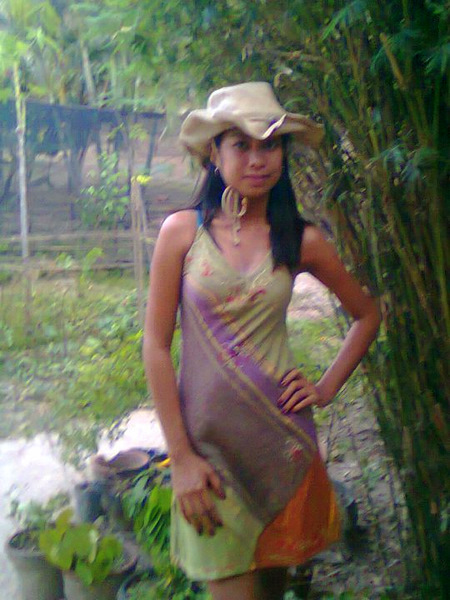 Amando and his wife had spent most of their vacation time visiting Guimaras, and only talked for about 90 minutes in front of  Robinsons which already had opened by now.  They had to return home the next day and Amando wanted to get back to Guimaras.   I informed my brother-in-law that we would like to visit Palawan for the upcoming wedding. The date for the forthcoming nuptials has not been set once, but when it is, we would be told.

Thought it was only right that we spend more time with my wife's brother and the family and would give us a good excuse to visit this beautiful resort island in the Philippines. We walked over to the jeepney loading station and got them on the right vehicle back to Ortiz Dock for the pump boat ride to Guimaras, and exhanged some hugs and handshakes.

A short visit. Not an emotional one. No tears shed despite the many years that had passed since my wife's last meeting with her brother. Me? I like Amando and his asawa.  Looking forward to the wedding in Palawan and exploring more of the Philippines. Just hope they have a good supply of San Miguel Pale Pilsen at the reception, and that we don't meet in front of a local Robinsons!