I love a good Christmas light display. So does my asawa.  We recently took a walk to check out some Christmas decorations in our subdivision outside of Iloilo City. Since my spouse is on a health kick, she has recruited me on her nightly treks along our paved, streets dotted with street lights that actually work. We headed out to a park that had been recently decorated by our maintenance workers but was disappointed that the lights had not been turned on yet even though the sun had set some time ago. Decided to walk over to my favorite house in our subdivision because I told my wife that I was absolutely sure that they would have a good display of Christmas lights. I was right (that does happen occasionally.) 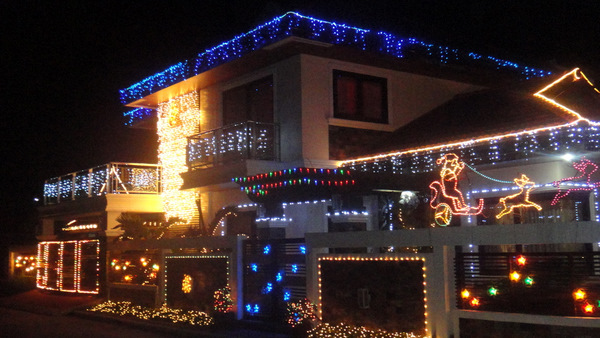 As we approached the home I heard a young female voice in the darkness that said to me" Hi, Dad!" Since the young girl seemed to be around seven or eight years old, and my asawa and I have only been in the Philippines for about two-and-half years, I was sure that she could not be my child (plus, my asawa and I have been married almost 12 years, and have I mentioned before that she can swing a mean bolo?)

So I jokingly said to the young lady: "Am I your Dad?" She replied no, sorry, her father is Australian and in the darkness she had mistaken me for her father. I said it was "OK," and I struck up a conversation with her older brother, an extremely polite young man and asked if the house with all the lights was their home. He replied, "no," they lived next door. We chatted a bit before I walked over to take some pictures.

I was quite impressed by the array of lights. This home is an absolute showcase, and I always make a point to walk by it when my wife and I go on our walks. The attention to detail that was implemented during the construction of this house rivals anything I've ever seen in the States. And the Christmas light display is one of the best I've ever had the pleasure of viewing.


As I was snapping photos, we passed by the gate of the residence which was open. I remarked to a gentleman standing inside that I was really enjoying the Christmas decorations, and he invited me in to view the rest of their home. He introduced himself as "Benjie," the owner. 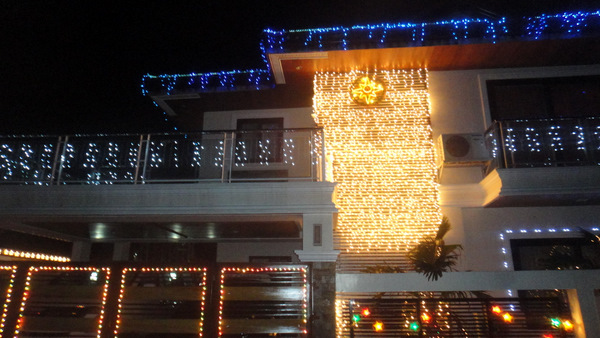 My asawa was too shy to enter the premises at first, but I said it's OK, we're being invited. I said I would love to check out this beautiful home. Benjie took us on a tour of the grounds and informed me that he had worked in New York. His English was excellent, and I was impressed by the grace and humility this Filipino exuded. He was obviously well off, but did not act self-important or boastful.


Benjie told me he started out as a driver and is now the main engineer for all the SM Malls in the Philippines. He's 40 years of age (looks years younger) and invited us inside. Again, my shy spouse did not want to go in, but I persuaded her as we took off our slippers before entering this beautiful home despite Benjie telling us that was not necessary.

I was absolutely floored by the craftsmanship displayed in this home. Windows and lighting fixtures imported from Germany, all with a modern motif which I like, and ceramic tiled floors imported from Spain.  Each room was tastefully decorated and painted in muted but appealing colors. This was our absolute dream house.


Here's a photo of the living room. Beautifully decorated space. The next picture is a view of one of the many different ceilings each room has. Absolutely great details. The house sits on 1,000 square meters, three individual lots. I have gotten some inspiring ideas from viewing this home for our future building project. I personally feel it is the premier home in our subdivision.

This stunning home is the weekend residence for Benjie and his family. They have another home in a town nearby that they live in during the weekdays. After a dessert that we washed down with Sprite, we thanked the gentleman for the tour and for his hospitality and took another look at the ultimate Christmas light display in Iloilo. We must of visited for almost two hours and we're so impressed by this man, who through hard work which involved sixteen-hour-days and working seven days a week, has done so well for his family and himself.  I jokingly told him that he had "achieved the 'American Dream' in the Philippines." He rose above his surroundings but has remained so humble and friendly.


He snapped our picture outside as we took one last look at his Christmas decorations and thanked him for his hospitality. We headed back home to our little four room house thankful for what we had and thankful for meeting a new friend. Malipayong Paskwa kag Masinadyahong Bag-ong Tuig! 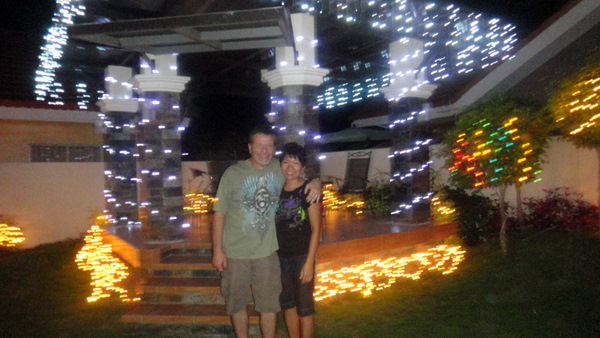 11 thoughts on “The Ultimate Christmas Light Display in Iloilo City”