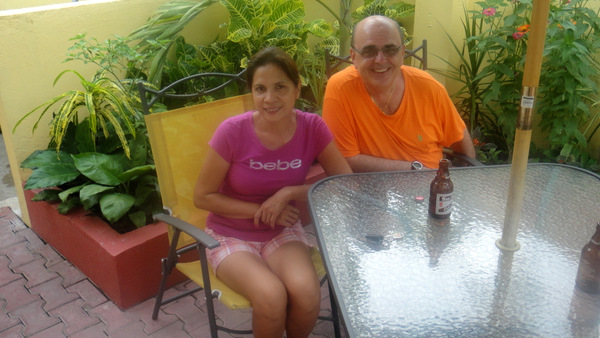 My asawa and I have some great new friends. Fergus and his lovely and talented wife, Rose, who reside in Iloilo province. We recently met them and enjoyed some good company, good food (all prepared by Rose), and some interesting conversation. I might also mention I also enjoyed quite a few bottles of San Miguel Pale Pilsen? "How many did you have?", my asawa asked. Good question.

I wasn't keeping track and since Fergus was so gracious to pick my wife and I up at our subdivision and was going to take us home, I did not worry have to worry about my bottle count. My new French Canadian expat friend is a smart man:

Several things also strike me about Fergus. He has a firm handshake. He absolutely has no accent at all. If you did not know, you would think he came from the American Midwest as I do. My asawa thinks the same. In fact, my new expat friend did not learn English until the age of eight as he was raised in a French Canadian household.

Rose is absolutely hilarious. My wife and I both like her. She speaks her mind but does so in such an amusing and endearing way. It is evident she does not take any crap from anyone. Neither does Fergus. Like me, he "suffers fools lightly."  That's probably why we hit it off so well with this couple. Plus, Rose is an avid gardener as my own asawa is (see next photo), and they are only one year apart in age. And no, I'm not revealing any ages in this particular post.


Rose brought out several batches of some tasty spring rolls which I admittedly devoured the great majority of. They went down very well with some perfectly chilled bottles of the aforementioned Pale Pilsen. I told my asawa I did not want to seem like a bad guest and leave any of the rolls leftover. Truth it, they were delicious and my asawa immediately saw through my flimsy excuse for eating so many of them.


Next came Wonton soup. Absolutely delicious! Now Rose makes everything from scratch, and it was evident she took a lot of time in preparing our meal. And let me tell you, my taste buds appreciated the effort. To top it all off, our hostess than brought out the main course: couscous along with chicken and beef dishes. I had seen couscous on several shows on the Food Network and on Top Chef, but had never tasted it. It's a Berber pasta dish of semolina and is a staple in Algeria, Morocco and Tunisia. It had an interesting texture and flavor. Rose than bought out a huge platter of fresh fruits. I have to honestly say that this was one of the most elaborate and tasty meals I have ever eaten.  I might also note that I was never without a fresh bottle of cold San Miguel by my side.


Fergus and I were discussing one of his main ways that he combats boredom in the Philippines. He's been traveling the whole of Panay Island along with Rose and is in the process of putting together a book on the many historic churches of Iloilo province. He's shared some of the chapters of his book, and let me tell you, he has some great photographs of these majestic churches and has far, far more detail than anything you can find online regarding this topic.  I was impressed. He sent me a PowerPoint presentation of the book which has the following title: "Visit of seven historic churches with The Way of the Cross in Iloilo province for Holy Thursday, April 5, 2012.


Fergus is providing the PowerPoint presentation free for anyone wanting to use it,  "especially people (filipinos) who are overseas and hankering for something of home during that time of year." He's planning a new website dealing with his love of these historic churches and is in the process of adding additional volumes to the book. I'll keep you posted on more details when they become available. Send me an email on my contact form, and I'll be happy to send you a copy of this free preview.


Didn't get home until midnight. Haven't been up that late for months. Had a delightful time with our new friends and Fergus, who regularly receives balikbayan boxes from Canada,  gave me a large jar of Kraft peanut butter (which he says is the best peanut butter anywhere) and some Tetly Chai Tea (I'm a big tea drinker.) We've also been invited back for some turkey (which I have not had in over three years) for Christmas. My asawa and I are both looking forward to the return visit with our new friends. It's going to make for one special Christmas celebration.