Looked outside our kitchen window this past Sunday afternoon and saw our neighbor Jesus getting a haircut. He was seated in a plastic chair outside near his tubig delivery truck (now equipped with a gargantuan speaker in the rear of the vehicle, more on that later) and was draped in a bright yellow barber cloth, not your typical classic model with black and white stripes like back in the States. 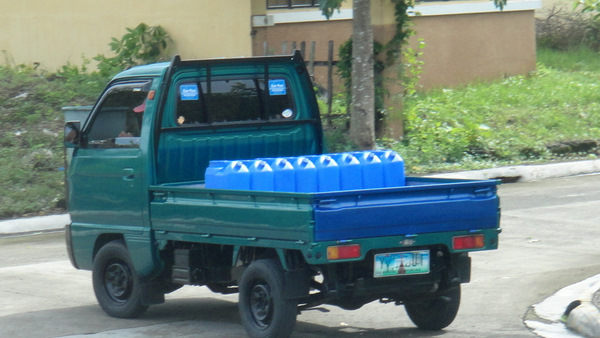 It was a sunny, muggy day and even with fans running right in front of our faces, my asawa and I both were uncomfortably warm in the house so I can understand that our neighbor and his barber, who evidently had made a house call, were seated outside. I'm too cheap to turn on the air con in our bedroom until early in the evening so we just dealt with the heat and hoped the coming week's forecast for rain everyday would bring some relief from the blistering sun.

Our new home in a subdivision outside of Iloilo City is much warmer than our residence in Guimaras but at least our windows are all screened and have the customary bars that are commonplace in the Philippines. Each screen has a separate cover that you can lift up and hook back into place to secure it and keep mosquitoes and lizards from sneaking in. There was a huge gecko making some racket outside my asawa's spare room this morning around 4:30, but it was too dark for me to see it. It was situated between our home and the firewall to Jesus' residence. I'm glad the screen was in place to keep it out.


At least our neighbor's son was not blaring some rap music from the truck's speakers this afternoon as his father was getting a haircut. The window to my room sits right outside the parking truck for their vehicles, and I had thought that the sound was coming from the new Isuzu SUV that now sits in front of our carpenter's home.

Since our neighbor's wife works as an OFW, Overseas Filipino Worker, in Lebanon, in addition to the construction and water delivery business, Jesus must be doing alright to be able to purchase such a new vehicle which he informed me cost 1.5 million pesos ( 34,500 US Dollars; I didn't ask, he volunteered the info.) The new SUV can seat 9-19 passengers. I'm not sure of the exact number because I know Jesus doesn't always understand me.  First time I inquired how many passengers his new Isuzu could seat, he repeated the 1.5 million peso figure. I asked my question again, this time pointing to the seats inside the vehicle,  and he replied with the "9" figure first and then said "19." It's a huge machine.


So when I heard some rap music blaring from next door this past Saturday afternoon, I assumed it was coming from the new SUV. Turns out a huge speaker was now sitting in the water delivery truck, and Jesus' son was playing the offending tunes. I cranked up a "death metal" song from my Jango radio which quickly brought my asawa to the entrance of my room asking what was going on. "Well, if he can play his new stereo loud, he can listen to some heavy metal!"  I know; I'm mature for my age but I believe in Old Testament, eye-for-an-eye-retaliation. In less than 30 seconds the neighbor's music was turned way down. I lowered the volume on my Amon Amarth tune. I don't think my neighbors appreciate the ear-blistering melodies of my favorite Viking metal band.


So I was pleased that although Jesus was outside getting a haircut, and his son and another lady were nearby talking to him, the new speakers weren't blasting out some offensive music. I asked my spouse if the lady standing outside was Jesus' asawa because she had told me she had seen a woman at our neighbor's second story window the other day that she said was his wife.  I thought she was still in Lebanon but maybe she had come home for the Christmas holiday. My wife said the Filipina now standing outside was not Jesus' wife so I went back to watching our new Sanyo television as my wife continued checking her Facebook. Just another typical Sunday afternoon in the Philippines. The day Jesus got a haircut.

6 thoughts on “The Barber Makes a House Call. Jesus Gets a Haircut.”