Fish. You either love them or you hate them. My experiences with eating fresh fish back in the States were fairly limited since I lived in Central Illinois most of my life. Now while my Grandpa and my Dad were avid fishermen in their day, getting up before dawn to head out to catch some blue gill and bass, I don't remember my two brothers and I ever getting to eat any of them.  I can remember chowing down on some fried catfish and recall countless meals involving fish sticks which I doubt had much actual fish product in them, but fresh fish? Nope, never had much of a relationship with them. Until now. 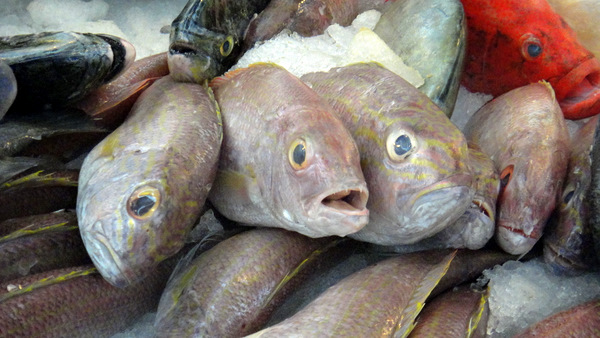 Pompano, or Ilat, as it's called at the fish market at SM City in Iloilo, is my favorite new menu item at our house. We can purchase it for P250 a kilo (5.74 US Dollars per kilo, or about $2.39 a pound), and my asawa steams it, adds ginger, sliced jalapeno and serves it on a bed of brown rice. It is absolutely delicious! I can't figure out how something that tastes that good is healthy food. I've mentioned that my spouse is dragging me along on her "health kick" (and I'm going along for the ride, sometimes kicking and screaming, however.)


So while my asawa was going over to the rice section to buy some more brown rice, I stood around the fish area at SM City to take some photos. Life is rough when you have so much spare time that you have to snap pictures of dead fish on ice. 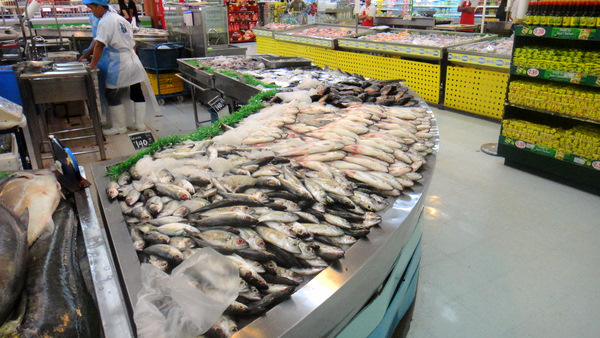 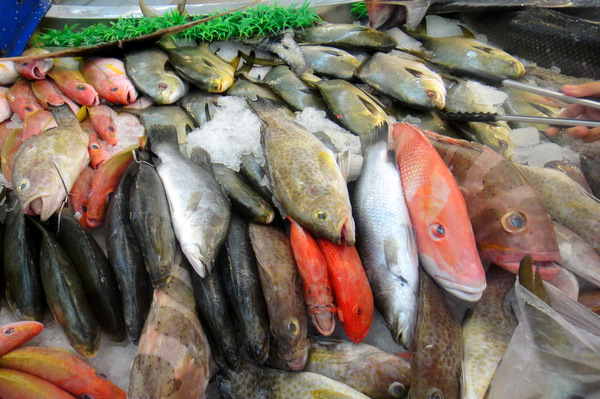 During a recent trip to the SM Hypermarket to buy a new Sanyo LCD TV, we also did our monthly grocery shopping, and I have to confess I  stopped by their fish section and purchased a kilo of fresh Tilapia for P120 (2.75 USD.) This was probably the first time in over two years that I did not purchase a can of Spam on a grocery trip. Frankly, I'm tired of it. I've eaten the stuff  several times a month since moving to the Philippines in July 2009. I haven't gotten a chance to try Gary Wigle's Special Spam Recipe, but I'm sure I'll be getting some more of the canned mystery meat in the future and try Mr. Wigle's recipe out.


Now don't think I've forgotten about junk food. Not at all. When my asawa and I made the aforementioned visit to the SM City Supermarket to buy the pompano, we had a morning merienda (snack.) My spouse got some fried rice with shrimp at one of the stands inside the supermarket, and I got two slices of Greenwich pepperoni pizza for P49 (1.12 USD),  and let me tell you that greasy pepperoni tasted great.

Did not find one single vendor that had soda dispensing machines (checked with four outlets) which had any soda available. My asawa went back into the supermarket to buy us a couple of cans. I asked  one young lady why no one had any soda available though they all had dispensers She told me that no deliveries have been made. Well, that does create a problem then. Can't sell a product if you don't have it.


While waiting for my wife to come back with our drinks, I walked over to the one solitary guy working at the stand called  "Hot Chicks." I asked him where the "hot chicks" were, because I only could see him, and he's a guy. With a puzzled look on his face, he said "we have chickens, sir, they are right here" as he pointed to their roasted birds. "I know," I told him, "I'm just messing with you." Told the asawa what I did when she returned with our sodas, and she just shook her head and rolled her eyes. Seen that look before. Probably will see it again.

14 thoughts on “Something’s Fishy at SM City in Iloilo”