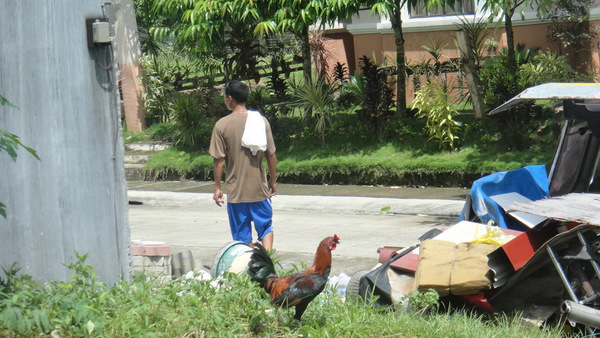 Our neighbor, Jesus, a carpenter,  recently sold his old VW. it was a dull black VW that barely ran. His rooster used to perch on top of the ancient Beetle and crow every morning around 4 am. Doesn't crow any more. I think he has become someone's dinner. I honestly don't miss the crowing or the battered vehicle that used to sit in front of our property.

With the old beater, construction material and general mess in front of our house, it brought back found memories of an old trailer park I lived in for a year back in the States. The junk certainly was an eyesore, and I was glad when our landlord had a little talk with Jesus about the mess.

As mentioned in an earlier post, I  did not want any trouble with our new neighbor. He supplies our drinking water for us, and I feel it is wise to stay on good terms with someone who provides such a valuable service. I didn't want our tubig to get spiked; we have to boil it anyway for me to drink it without any side effects as it is.  He's a friendly guy anyway, but I doubted that he would take action on our landlord's request. But I was wrong.

Couple days after our property owner's discussion with Jesus, my asawa and I saw his construction crew starting hauling away some of the old lumber and material sitting on the street by our home. I was pleased to see that and was amused when one of the workers carried a load of lumber in his arms as his co-worker zoomed him away on a motorcycle. Try doing that in America, my friends!

But the old VW still remained. An ugly sight. Though I do confess I have fond memories of riding in a Beetle a senior friend of mine had back in high school. A friend and I, both juniors, used to occasionally snag rides from our upper classmate and thus getting to avoid riding the school bus home. We certainly felt like a couple of "big shots" riding around in Steve's black VW. Those were the days.

But much to my surprise the next day I heard a loud racket outside our home. Jesus and his guys were outside firing up the old VW, and it was actually running, though wheezing and coughing like (well, like me, after I've made the 30-minute walk to our subdivision's main entrance to catch a jeepney.)

One of the crew circled around the block a few times and parked the car across the street from us in front of another neighbor's house. Since the home was occupied (we have a load of vacant residences in our subdivision outside of Iloilo City), I imagined those property owners would not be too thrilled about an ancient black VW parked in front of their home. But at least is was gone from our house, I thought. (Now come on, honestly, wouldn't you think the same thing?)

About an hour later the racket started up again. A group of young Filipinos had gathered around the old VW and cranked it up. Coughing and sputtering again, this time like an old blue-haired lady at a Vegas casino smoking a cigarette while playing the slots and hooked up to an oxygen tank (don't laugh; I've witness that numerous times.)

I thought the guys were just starting up the vehicle to move it again, but no, it actually looked like Jesus was showing the faded black VW to a potential buyer. The young man looking at the machine definitely had a gleam in his eyes. He was probably thinking of all the cute Filipinas he could impress as he slowly circled SM City in his new set of wheels. Teen-aged guys. Doesn't matter what country they live in. Their hormones are racing faster than the car they're speeding around in with the boom box stereo cranked up listening to old Run D.M.C. rap songs.

After a few laps around our block, the young buyer closed the deal with Jesus. No longer do we see the old VW parked in front of our home in our subdivision outside of Iloilo City. It's just as well, that was the rooster's favorite perch, but now the rooster is gone, too. The place won't be the same without either of them.