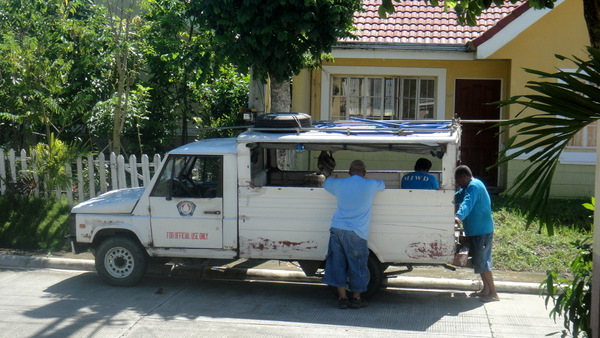 Water (tubig) is a necessity. Safe drinking water is essential. We didn't have any running water for almost two weeks after making our move from rural Guimaras to a subdivision outside of Iloilo City. Thankfully our next door neighbor, Jesus, sells purified water, "Ever Pure."  Don't know how "pure" it is because I can't drink it without side effects. Have to boil it first. My asawa can drink it. But she literally grew up in the heart of a jungle in rural Guimaras. I grew up in a small town in Central Illinois and drank water straight from the tap. I'm still here at the age of 59 alive and kicking, so I guess that drinking the tap water didn't do too much damage to my system.

Had an inspector from NAWASA  (National Water and Sanitation Association of the Philippines) drop by our home the day following our move. Until a new meter was installed on the property we would not have any running water. Truth is, once the water was turned on, we would only have running water on Tuesdays, Thursdays and Saturdays. That's the way it is in our subdivision. However, I was recently informed by an American expat, James, who lives in our area, that water service would be available on a daily basis within the next six months.

So with the water inspector already making an appearance I was hopeful that our water supply would be forthcoming soon. Our landlord even had a contact at the NAWASA office, and we hoped his connection would help escalate our meter installation. I was wrong.

For those of you that have lived in the Philippines for some time, you are well acquainted with the fact that occasionally it takes a little nudge to get things moving along.  That "nudge" usually comes in the form of pesos. After not hearing any word about our water situation the first week we lived in our new subdivision outside of Iloilo City,  I was getting concerned. Our main water barrel (pictured below) provided by our landlord was empty. Two other barrels (see photo  of one barrel strategically placed outside our CR, Comfort Room, along with the tabo, water scooper) were almost dry and no word about when our water would be turned on. 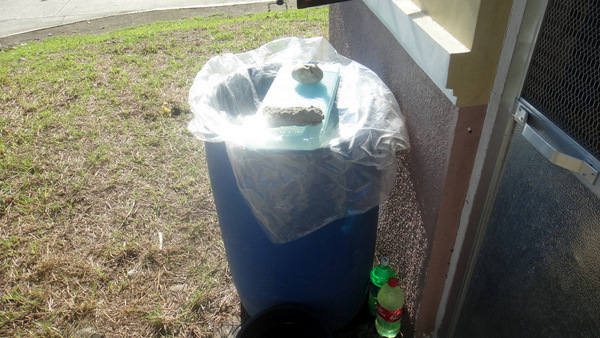 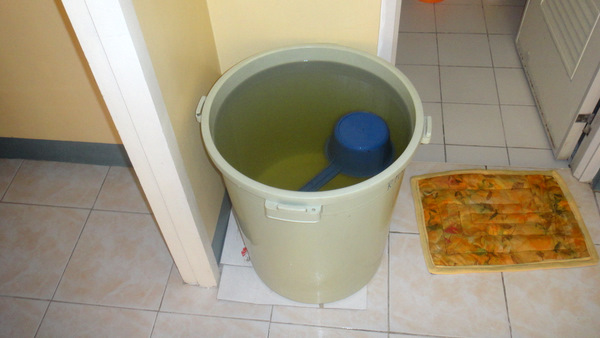 Our landlord sent us a text Sunday night that he had provided that "nudge" to his contact at the water district, and our water meter should be installed on Tuesday (a week after moving in.)  I don't how much that extra incentive cost, but I was looking forward to having a regular shower without using the tabo, water scooper, to pour water over my fat head.

Our CR, Comfort Room, shower at Guimaras had running water daily from NAWASA, and though the water pressure was low, I still enjoyed my daily showers. However, my asawa always used the tabo and a water bucket to conserve on water and save  on our bill (we had a well which was also used for our drinking water.)


Tuesday came and went without any water. Thankfully, Jesus had a water tank and filled all of our barrels for us. He's a good neighbor. Wednesday came. No word about any tubig. Thursday, a scheduled water delivery day in our subdivision and another text from our landlord. Seems that our local NAWASA did not have a new meter that they could install and would be checking their stock room to see if an old one was available. If so, they would be out today to turn on our water. I had my doubts.

Thursday comes and goes. Another day without running water, but at least we still had a supply of safe drinking water from our neighbor. So far my asawa has been handling all the text messages but asked me to send one to inform our landlord that we still had no water.  I sent a text message advising our property owner of the situation. It went something like this : "I'm not surprised that you had to pay someone in the  water district to get our water turned on. That's the way things are. I understand. Thanks for your help, but we still do not have water. Nobody came to install it today."

Did not receive a reply that Thursday. Friday night my asawa informs me that the landlord has again contacted the water district office. If  we pay 300 pesos (about 7 US Dollars)  for overtime pay and snacks for the workers, they will come tomorrow, Saturday, to install our water meter and turn the water on. The landlord told us to just take the 300 pesos out of our next rent payment. I asked my wife to send a reply stating that we would me more than willing to do that. My hopes were high.


Much to my surprise and delight, a truck with three workers pulled up across the street the next morning (see photo above)! My wife went out to talk to the crew since I did not want the presence of an American expat like myself to spur an increase in the overtime pay. Minutes later, my wife, who had given the crew the 300 pesos, informs me that the landlord has already told them that an American lives at the property. But the guys quickly install the meter without asking for any more money and turn on the pressure.

Big trouble, though, soon arises. Seems that the meter is running but no water in the house is turned on. Great! We finally have water and now I'm told there's a leak somewhere. Could be anywhere. In the buried pipes or in the plumbing somewhere in the home. The crew indicated there was nothing else they could do. I wasn't very happy. (Next post: The Conclusion to "Tubig Trouble.")