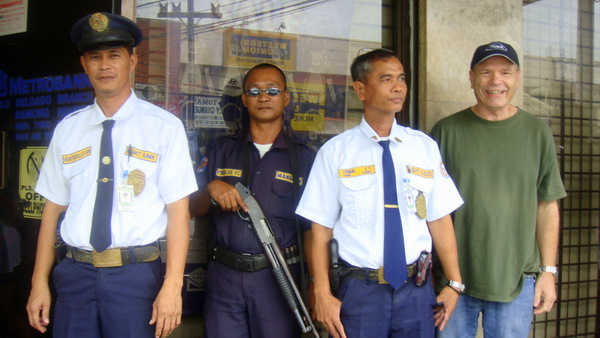 Personal safety was one of the considerations I took into account when my asawa and I moved to our new home in a subdivision outside of Iloilo City in the Philippines. With four armed guards at the front gate, one guard with a shotgun (is it loaded? Do you really want to find out?), another checkpoint with three guards (that always salute me) and security roaming our paved streets on bicycles, I felt fairly confident we were moving into a secure location. However,  a recent conversation with my asawa revealed that there may be some trouble in paradise.

Had to go to our local land management office for our subdivision along with our landlord's plumber, Alan, to obtain a permit for materials Alan would need to put in a drainage pipe for our septic tank which had backed up (more on that smelly story later.) A permit is needed when anything is brought in and has to be presented to the security guards. We did not have one when our American expat friend Jeff, the self-proclaimed "Crazy Cano," and his wife Rose had brought in a refrigerator for us (you don't how much you miss a cold drink until you don't have a fridge), and we had not obtained the necessary permit for the jeepney to enter the subdivision.

Personally, I'm all for extra security which I believe enhances our own personal safety, but there we were at the gate greeting Jeff and crew, and they were of course stopped by security. Fortunately the realtor that arranged for the rental of our home was also at the guard's station and advised the guards that she (such a nice lady) would fill out the necessary paperwork. Security let everyone pass. (A BIG THANKS to Jeff and Rose for that refrigerator. It works great, although I haven't been able to purchase any bottles of San Miguel Pale Pilsen to put in it yet.)


OK, back to our plumber.  A gentlemen was in the air-conditioned office of the land management official speaking in the native Ilonggo and filling out some paperwork. I had no idea what was being said since I have only an extremely limited vocabulary of the local language. I could determine, however, by the man's tone and animated nature of his conversation,  that something was disturbing him.

But it was soon our turn, and it only took about ten minutes for the necessary permit (with no charge for the paperwork), and we were on our way back home. I had already forgotten about asking what the Filipino gentleman ahead of us was talking about since I was more concerned at the time about being able to flush our toilet in the CR (Comfort Room.) I do have my priorities.


This past Saturday morning, however, as I was checking my website for comments, I went into the kitchen to prepare a cup of Twinnings English Breakfast tea when my asawa walks in.  I can't recall what steered our conversation to the distressed man in the Land Management office a couple of days earlier, but my spouse informed me that the gentleman was complaining about a break-in at his property where even the light bulbs had been stolen.


The house has been unoccupied for some time as are many homes in our subdivision. My wife says that some people buy a property and are unable to pay the monthly mortgage payments and then abandon their residence. I've also heard that many homes in our subdivision were flooded during Typhoon Frank which ravaged Iloilo City and the surrounding area in 2008 and caused massive destruction. Again, folks just stopped paying their mortgage payments and fled the area.


But this recent revelation gave me some concern for our personal safety especially when the land manager told the distressed home owner that "workers probably were responsible." There is a huge work crew employed throughout this subdivision doing landscape work, installing new storm drainage pipes, sweeping the streets and picking up garbage. Now we've only been in our new residence about two weeks and do not have the background and knowledge that the property manager does. However, I don't know what kind of employment screening process subdivision management has, but perhaps they need to rethink their employment practices.


That said,  I personally find the workers that I've talked to quite pleasant guys. I had a load of garbage that I took out to the garbage truck the other morning (the drivers always constantly honk their horns to let you know they are in the area.) One worker approached me to take my bag, and I said, no, I'll just take it to the truck. I took the bag and "slam-dunked" it on top of the heap of refuse already piled on the truck. The guys all get a laugh out of that.


But we have bars on the windows, a security feature common in many Filipino homes, and we both sleep well at night. Personal safety in our subdivision outside of Iloilo City? Well, I still feel secure despite my wife's information, but I make sure our doors are locked, plus  a street light brightly shines in our yard and bathes the inside of our home with a warm  fuzzy glow. Funny, I have a similar warm fuzzy glow when I have too many bottles of San Miguel Pale Pilsen. But maybe that's just me.

4 thoughts on “Personal Safety in the Philippines: Our Subdivision Outside Iloilo City”