Boracay Philippines. Puerto Galera. Guimaras. Just some of the better known Philippines resorts. Visited Cabaling Beach this past Sunday to celebrate the birthdays of my asawa, now 47, her sister Alida, 33, and Joery, her husband, 39. The sky was overcast most of the day, but our nieces and nephews were enjoying swimming and playing on the beach as I waited for the rest of the party to return from visiting my wife's traveling manicurist who lived nearby. Had eaten a breakfast of spaghetti and fried chicken at our rented nipa hut on the edge of a jungle, but was getting hungry for some of those butterfly pork chops I had purchased at SM City Supermarket in Iloilo. Plus, Cousin Emma and her crew were bringing the San Miguel beverages,  but they hadn't arrived yet.

After over an hour of watching the kids on the beach, the adults finally arrived. My asawa wanted to know if I wanted the pork chops grilled. I quickly answered in the affirmative, and brother-in-law Joery proceeded to fire up the grill with some charcoal we had brought along using some cardboard and newspapers for tinder.

After  10-15 minutes (and what seemed an eternity to me) the meat hit the grill making that sizzling sound I love to hear. I don't care what Philippines resort you are on, whether it be Boracay Philippines or Puerto Galera, once a guy knows he's going to be consuming some grilled meat, it always adds to the enjoyment of the place. Now if Cousin Emma would just get here with the San Miguels.

The chops weren't slathered in a BBQ sauce as was my favorite way of grilling back in the States, but my asawa furnished a soy sauce dipping sauce which I tried. Tasted fine just as they were as far as I was concerned. Washed them down with some Coke. Received a text message that Cousin Emma and her asawa, Danett,  were on their way so I decided to walk around and take some more pictures. 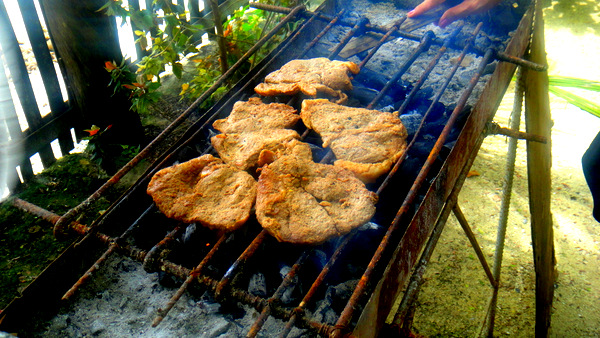 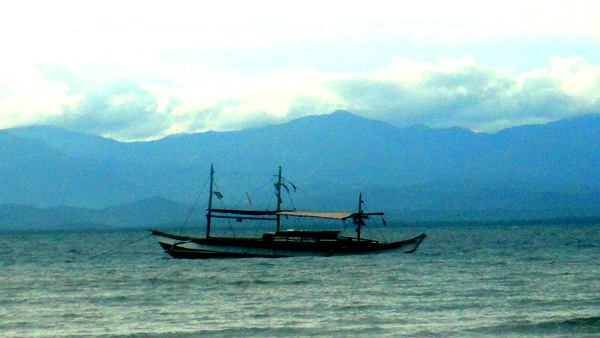 The mountains shown above are nestled on Panay Island, home of Iloilo City, location of our favorite shopping malls in the Philippines. The vessel in the background is a cargo ship that has just left the dock in Iloilo. Fishing boats can be seen that were not too far from our shore at this tropical beach.


While we certainly don't like the new corkage fee, or charge for bringing in food  that Raymen Beach is now imposing, we feel that as far as our family goes, we prefer it over the other beach resorts we have seen on Guimaras thus far.Well, looks like Emma has finally arrived with our San Miguel liquid refreshment. More stories and pictures from Cabaling next post.  I need a Pale Pilsen, and I need it now!