Pulling out of Paradise

Left Villa Igang, a Philippines resort located in Guimaras in the Western Visayas region. Had spent the afternoon with my new mate from New Zealand,   Murray,  and his crew. The beach resort has some tremendous scenic views and could provide some picture perfect postcards for those doing some Philippines travel tour. Our rural province is packed with a plethora of Philippines tourism hotspots, and is fast becoming known as an alternative location aside from such popular destinations as Palawan and Boracay. 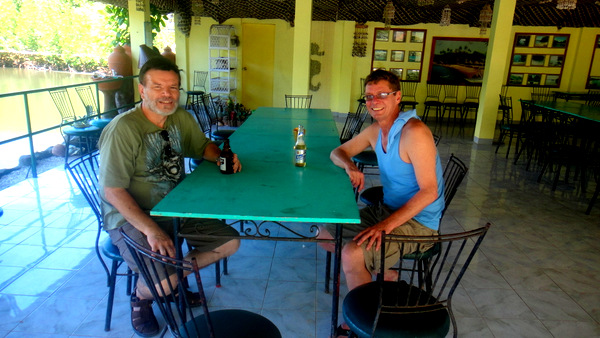 My asawa and I decided to walk the mostly shaded path out of the Philippines resort. A gorgeous Sunday afternoon made for ideal conditions, and although I could afford the 10 peso (23 cents) ride each out of this beach paradise, I really needed the exercise.

Been suffering through a couple of weeks battling a cold and sore throat and felt a stroll through this refuge would be a good way to stave off future medical costs. Guess I was trying to put into practice that  old adage from Ben Franklin about "an ounce of prevention being worth a pound in cure." I carried it a bit too far, though, as the road out of this paradise of Philippines tourism was longer than I thought.

Several tricycle and motorcycle drivers stopped along the way to see if we wanted a ride. Advised my wife that we would push on. Hopefully the exit was coming up soon as we planned to catch a jeepney ride home, I was beginning to regret this Philippines travel experience. Another motorcyclist paused to inquire if we needed a lift. "HOW FAR?" I asked. "1.5 KILOMETERS," was the reply. "NO THANKS, WE'LL GO ON."  Turns out to have been more like three kilometers, about 1.86 miles. Maybe we should have taken him up on that ride. 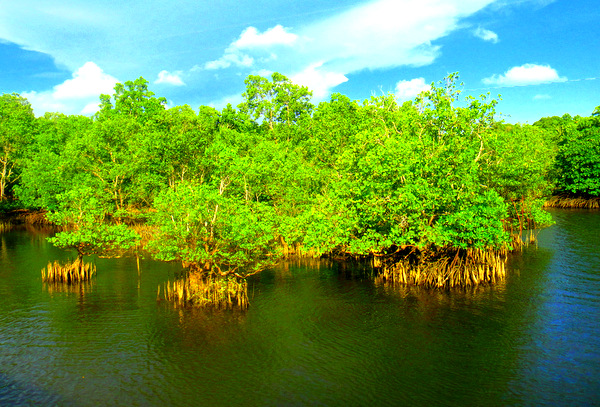 The above photo depicts one of the many mangrove areas of this Philippines resort. Here's some information regarding this ecosystem according to the website, "Bohol-Philippines.com"


"Mangroves are salt-tolerant trees that have adapted to living in salt and brackish water conditions. They vary in size from shrubs to tall trees and are found along sheltered tropical mudflats or wetlands or in association with estuaries and lagoons and may extend inland along rivers, streams and their tributaries. They require slow currents and plenty of fine sediment in which to set their roots.

Mangroves are critical spawning, nursery, feeding and transient shelter areas to hundreds of fish species, crustaceans and invertebrates and support an abundant and productive marine life."

My asawa and I were both getting thirsty and tired. My decision to trek out of this showcase of Philippines tourism now seemed a foolish one. We had been walking over an hour now, and it was approaching 4:45 in the afternoon.

Finally,  after passing some rice fields shown in the next photo, we thankfully heard the sounds of nearby road traffic. Approached the jeepney loading station and fuel stop,  where my asawa purchased two bottles of tubig (water.) 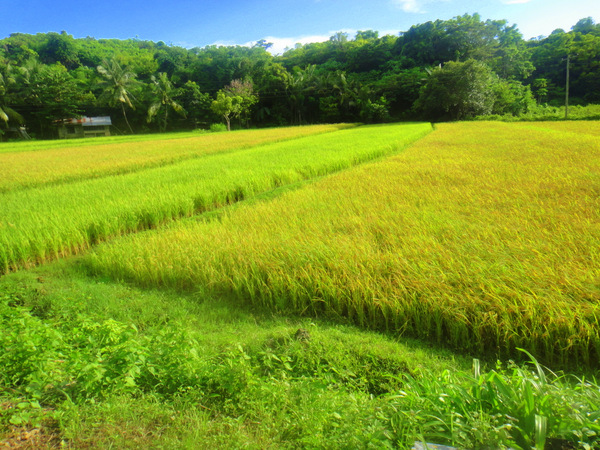 Spoke to some tricycle riders waiting nearby to discover that the last jeepney had left for the day at 4 pm. It was now almost 5. My wife asked one of the trike drivers how much for the 35-40 minute ride to "The Crossing" located at our home in Guimaras. "TWO HUNDRED PESOS," came the reply. "WE'LL WALK," I said as I crossed the street in the direction of our town, knowing full well that the fare would go down. "150 PESOS," the driver now announced.  I gave my OK as we climbed into the vehicle. We had ridden a similar distance before from Raymen Beach, another popular Philippines travel destination on our island, for 150 pesos (3.45 US Dollars) and knew it was a more reasonable rate.  Besides, there were several other tricycles perched nearby with drivers who would be more than eager to undercut their fellow amigo and offer us a lift home.

Made it home and had the driver drop us off  near our "Crossing."  I tipped our chauffeur a generous 50 pesos (now he had made the P200 fare that he originally had asked for) and made our way home. Just  a short walk to our residence, and the end of our visit to a beautiful Philippines resort. My legs ached, but I would soon be resting on our couch,  channel surfing trying to find something to watch.

Had a pleasant visit with Murray and his crew, and got to spend some quality time with my asawa at the Jordan Wharf in Guimaras that morning as we waited for my new Kiwi friend. It was absolutely one of the best Sunday's we had spent since arriving in the Philippines over two years ago. But I need to rest up a bit before attempting such another journey as the one this afternoon.  I'm sure not getting any younger!