Unhappy Goats and Chickens, and a Philippines Resort

Nothing beats sitting in the shade of the Jordan Wharf enjoying the gentle breezes blowing from the Guimaras Strait with a plastic bag of Pepsi in hand with my beautiful asawa seated next to me. OK, I'll admit that if I was on a Philippines resort  or tropical beach with a bottle of San Miguel Pale Pilsen in one hand, that might be an even better scenario on a lazy Sunday morning. We're waiting for Murray from New Zealand to arrive from Iloilo City (I will eventually get to that part of the story, trust me.) 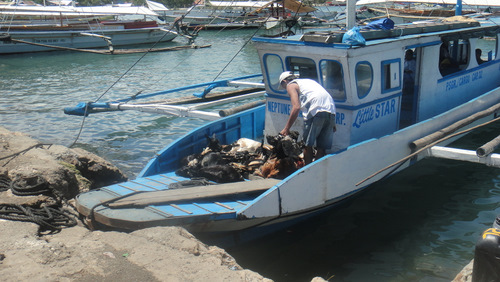 Sunday is the big market day on our little slice of paradise filled with some of the most beautiful tropical beach resorts to be found in the Philippines, but the goats and chickens that were being loaded on a pump boat for a trip to nearby Iloilo City weren't probably going to have as good as Sunday as I was enjoying. Can get a better price for your animals and poultry in the big city, so I was not surprised to see the tricycle (pictured below) loaded down with some creatures that were going to make the trek to Panay Island. 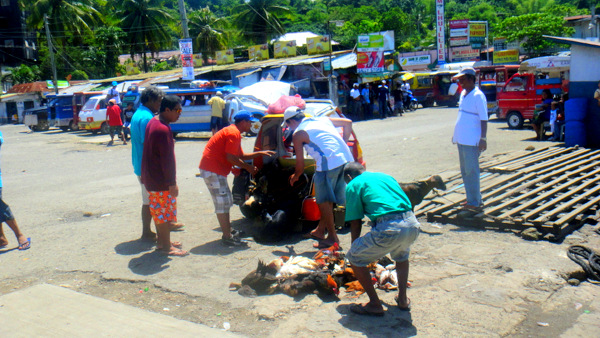 Just got a text from Murray. He just arrived at the dock in Iloilo City and should be arriving soon. He's booked a room at one of our beach resorts in Guimaras, the Villa Igang. I checked with our Guimaras Greeter at the Jordan Wharf to check on the rate to the Philippines resort. 700 pesos (16.20 US Dollars) for a jeepney. 450 pesos (10.41 USD) for a multicab. Takes about 40 minutes to reach the location. There was going to be four people in Murray's party, so I saw no need for the larger jeepney, the multicab would do fine.

Wasn't long until Allan, one of our regular multicab drivers that we use to haul our groceries from Iloilo City each month, sat down at our table. "WHERE ARE YOU GOING, SIR?" Advised our friendly Filipino that a friend from New Zealand was going to the Villa Igang beach resort, and I asked him how much he charged. "500 PESOS," was his reply. "HOW COME THE TOURISM DEPARTMENT OFFICIAL JUST TOLD ME IT'S ONLY 450 PESOS?" I asked. "OH, OK, 450 PESOS, SIR," he said now fully aware that I had already checked on the going rate before asking him.

I like Allan, but he's a businessman and not above trying to make an extra peso or two. I always check on the rate before I step into any jeepney or tricycle taking me to a new destination. If I don't like the rate, I don't have a problem stepping off and going to the next tricycle waiting in line for a better deal. Many times the driver will give me a better deal before I can manage to get my rather large frame out of the vehicle anyway.


Well, Murray should be arriving soon so let me wrap this up. Next post will feature Murray and his pretty pinay sidekick, Irish. More pictures and more stories from our little slice of paradise coming up. 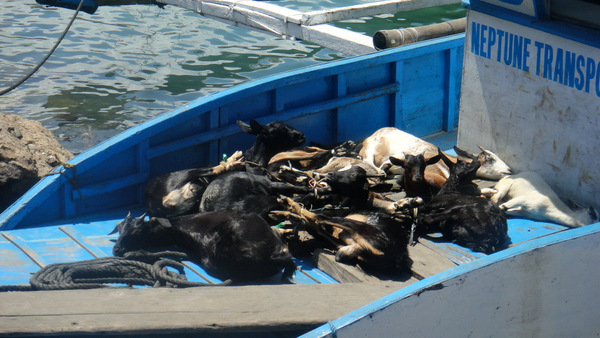