My Filipino Wife is a Loan Shark

Loans were being made at our home on Guimaras Island faster than two rabbits making babies in a sock! I had no idea my asawa had been providing pesos to various relatives in the past year. I accidentally discovered that my spouse was a loan shark when her cousin Doning stopped by the other morning. I spied him as he passed through our front gate. Advised The Sainted Patient Wife that her relative was here. I recognized him as he was part of the crew that built our new Comfort Room (CR, or Restroom)  almost two years ago. Doning always wears a distinctive headband and has a mole on the left side of his face with a long dark hair growing out from it.  SPW went outside.  He stood on our front porch, too shy to come in, and I went to the front door to greet him and saw him handing my spouse two 1,000 bills (about 26.64 in US Dollars each) Now that got my attention! 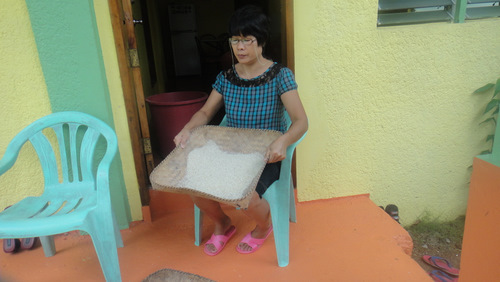 Seems Doming's son had been in the hospital this past June, and SPW had loaned him P1,000. He had borrowed money from my wife before and had always paid her back. I didn't  mind her coming to the aid of a hardworking relative that needed a helping hand. After refusing the additional P1,000,  I'm sure he could use the extra cash more than we did, I invited our relative inside and my asawa fixed him a cup of Nescafe 3-in-4 Brown N' Creamy coffee. His two daughters that worked in Lebanon as OFWs (Overseas Filipino Workers) had recently sent some money home, and thus he was able to pay off his debt.

I excused myself and left them to chat. An hour later after an exchange of some chiz miz (gossip) and pan de sal, my asawa's cousin departed for home, and my wife pulled a small, duwende-sized green notebook from her purse. She flipped to a page which I could see was a list of names and proceeded to scratch off an entry for Doming's debt.

"WHAT? YOU HAVE A LIST OF PEOPLE THAT OWE YOU MONEY?" I asked. "I DIDN'T KNOW YOU WERE MAKING LOANS. WHO OWES YOU MONEY YET AND HOW MUCH?'' I was not very pleased to discover that The Sainted Patient Wife had been making secretive loans. We just had a recent incident in which one of her relative's would not respond to her texts concerning a loan her relative had promised to pay over a few weeks ago (that debt has now been settled by an outside concerned party.) My wife was irritated that her texts had gone unanswered. If the debt could not be paid repaid, she at least wanted the courtesy of an answer to her inquiry.


So when my wife advised me that four relatives owed her a total of P5,000 (118 US Dollars),  I expressed my displeasure. She told me that the borrowing parties had always paid her in the past, and she did not want me to be bothered with it. She does not charge any interest for the loans, no matter how long it takes to repay them, but said "5/6" loans are common in the Philippines. A "5/6" loan is a 500 peso (11.82 USD) loan for thirty days and P100 (2.36 USD) interest is charged when the loan is repaid.

Listen, I'm all for helping those in need, but if not for the generosity of readers who financed a recent move my father-in-law made, we would have had a shortage in our finances this month. Supporting five people a month, plus helping out our five relatives in the nipa hut in our front yard,  can stretch our budget at times. After reviewing the loans that were still unpaid, which my wife assured me would be cared for, I left the matter for future payouts in her hands. As long as we have money for food and can pay our utilities, I'll defer to her. It might mean an occasional reduction in my San Miguel consumption at times, but that's just the price I'll have to pay. I love my San Migs, but I love my wife more.