Pineapples and Crabs. It’s a Tough Life in the Jungle.

The Sainted Patient Wife walked into the house the other day at our home in Guimaras carrying a pineapple. Not unusual to see. We have pineapples growing in our yard (see second photo.) But my asawa was excited because the pineapple depicted was from the top of a pineapple she had planted two years ago after I became an American expat and moved to the Philippines with my beautiful Filpina wife. To my knowledge, we didn't have pineapples growing in our backyard in Central Illinois. SPW informs me that bigger section of the pineapple is planted, a new one could sprout up in a year. A blossom rises from the top of the plant indicating a new pineapple is ready to be picked. The things you learn living on the edge of a jungle in the Philippines! 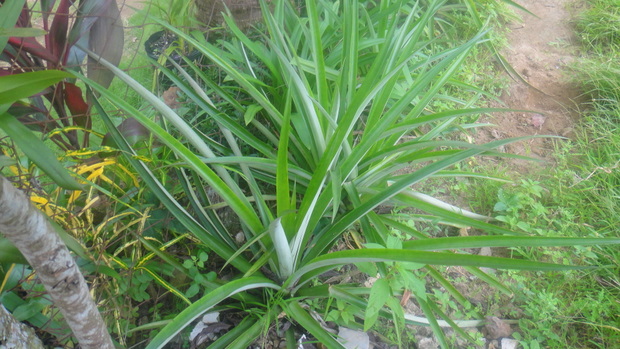 On to the fresh crabs (I'm an old one, I will readily admit to that.) One of the mothers of the preschool children that my sister-in-law teaches at out home in Guimaras had some freshly picked crab for sale at only P120 a kilo (2.83 USD, or about $1.18 a pound.) My asawa loves fresh crab. She thoroughly rinsed them and cooked them in a huge pot of boiling water. She said the crab eggs are the best part, but I declined eating any of those, but did sample the meat which was quite tasty.  Life on the edge of a jungle in the Philippines. Yeah, it's a tough life, but someone's got to live it.