My father-in -law stopped by "The Compound" this past Sunday around 6:30 am. He always sticks out his paw to shake hands with me and greets me with a "Good Morning." Lolo (grandpa) always seems happy to see me. The Sainted Patient Wife had given him half of the money he needed for his upcoming move. Thanks to some generous donations from readers of this website, we were able to provide him with 50% of  the money needed for his Bayanihan move. Bayanihan is a Filipino term taken from the word bayan, referring to a nation, country, town or community. The whole term bayanihan refers to a spirit of communal unity or effort to achieve a particular objective (source:Wikipedia.) 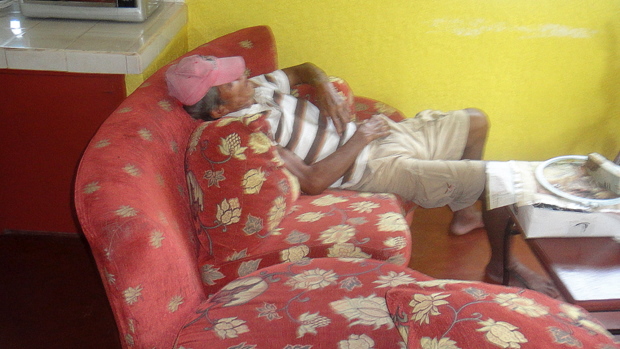 In the rural Philippines, such as Guimaras where we reside, family and friends work together to literally pick up and move houses and nipa huts to a new location. He is extremely grateful for the earlier donations from generous readers of this website and wanted me to be sure to convey his personal thanks. He doesn't quite get the concept of the Internet and websites, having just gotten electricity at his old home place three years ago and has never owned a television or cell phone in his life, let alone a computer.

The cousin that he has been living with has a son that often goes on drunken rampages and has threatened my father-in-law. Lolo, separated from his wife, my mother-in-law that lives with us, tried to stay with us before but he gets too bored. He likes to spend his spare time making charcoal and earn a few pesos that way. He announced his need to move, but said he would need around 14,000 pesos for the move.

It wasn't until his latest visit that my wife explained to me that it is going to be a bayanihan move  scheduled for August 14, and it will require him to hold a fiesta for the many folks that will be helping him. He also needs some funds to tide him over as he regularly goes without meals. We always give him some groceries when he stops by, but the 14,000 pesos (323 US Dollars) he needed would have been a huge hit on our fixed monthly income, but again, thanks to some helpful donations, half of the money needed to move lolo has already been raised.

I will post this donation button one last time for anyone else that would like to contribute. Any amount is appreciated and will go directly to my father-in-law. Thank you so much for your continued help and support. All donations are done through a secure PayPal site. All proceeds from the sale of my eBooks, "The Philippines:A Guide to Moving & Living in Paradise!" along with "The Philippines Visa Guide for Expats" will also go towards the big move.

A big "thank you" to Boston Pauly, Steve (and his asawa),  JC,  Mary Anne and Alan Howell and Murray M. for the generous donations they have already made. Their contributions, along with Robert D., Raphael M., Steve A., Patrick M., Murray M., William S. and Robert C.  who have purchased my eBook, has raised  100%of the total $323 needed to move Lolo. And a BIG THANKS to Mike Crews who donated $130 in order for us to meet our goal! And thanks to CJ Cook who put us over the top with his purchase of my eBook. ALL proceeds of the sale of my ebooks through the month of August will go to my father-in-law to help him out some more with his expenses. THANKS SO MUCH TO EVERYONE! THE SAINTED PATIENT WIFE AND I TRULY APPRECIATE YOUR SUPPORT.

2 thoughts on “Lolo’s Big Move is Coming Up. Big Thanks to Mike Crews! The Goal Has Been Met!”