Decided it was time to hang out at The Shirven Hotel with my American Expat friend, Brother Tom. My asawa came along. She needed to get out of the house more. It was a Saturday night, and the hotel in Guimaras has been known to have some expats that gather for a few San Miguels and small talk on the weekend. A great combination.

Brother Tom was going to be leaving soon for a stint in the States but would be returning to our little slice of mango heaven next March. Our beautiful Filipina server, Mae, seen in the photo above with Tom and myself, made sure the guys had a frosted mug along with bottles of San Miguel Pale Pilsen. However,  the pretty pinay had erred in assuming The Sainted Patient Wife would be drinking San Miguel Light instead of the Pale Pilsen her male companions were having.


When Mae returned to our table, I advised her that my asawa prefers the San Miguel Pale Pilsen  that the "macho men" were drinking. But since the bottle was already opened, my wife said it was OK, she'll drink it. My spouse is such a nicer person than her American expat husband.  We ordered some fried calamari (P100, 2.33 USD) and cheese sticks (P55, $1.28 for 12 pieces) for appetizers and chatted with Tom. Only P30 (70 cents) for a bottle of Pale.


I also ordered a serving of peanuts for  P20 (47 cents) which my expat friend from Florida supplemented with some of his own "Happy Nuts," his favorite brand of nuts from the Philippines. We always crack some remarks about "loving our 'Happy Nuts,'" and our juvenile humor is never recognized by Mae. I'm fairly sure my aswas understands, but she just lets it go and allows Tom and I to have our fun. She's a good wife.

Of course, that's my beautiful asawa in the following photo standing next to her husband, this author's website, who is not drunk (only had two Pale Pilsens that night, but was trying out one of his "tough" looks on Mae who took our pictures.) Brother Tom is on the right, teeth clinched and a "deer-in-the-headlights" look  with a bottle of San Miguel in his hand. 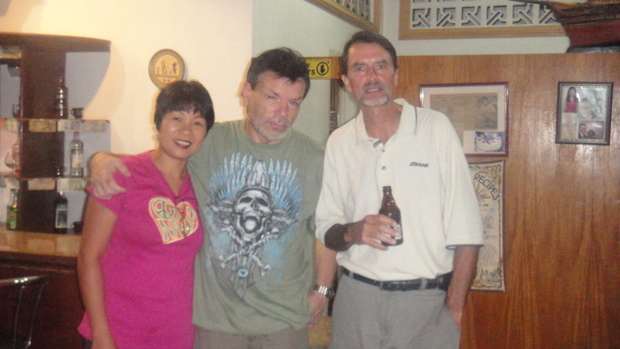 Here's another photo in which The Sainted Patient Wife said to me that "Brother Tom looks like he is possessed." Well, if he is, since he works at the Trappist Monastery in Guimaras, he has a lot of Brothers in the order that can help rid him of his demon(s.)  The last photo is a shot of the happy trio. We took off around 8:30. Total bill was 420 pesos ($9.78) which included Tom's bottles of San Miguel. Not a bad price for an evening of fun with the asawa and friends. 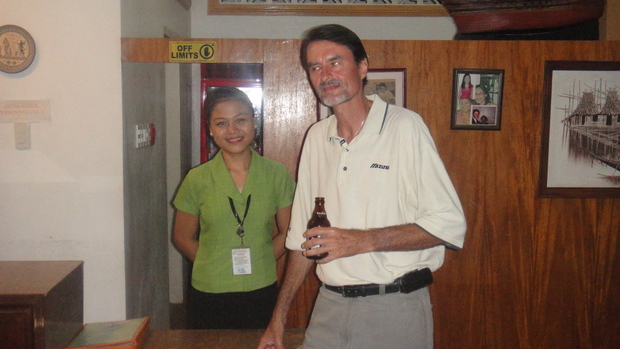 I'm not reimbursed in any way by The Shirven Hotel located a short 25-minute jeepney ride from the Jordan Wharf in Guimaras. Along with Mae, they have a great staff in Maricel and manager, Nick. Check out this link if you want more details about their establishment. The Sainted Patient Wife and I are returning next Saturday to our favorite hangout to meet Brother Tom, who is bringing a lady friend, for a final send-off for our American expat friend before he returns to the States. I highly recommend a visit to The Shirven whenever you visit Guimaras. I don't think you'll be disappointed. 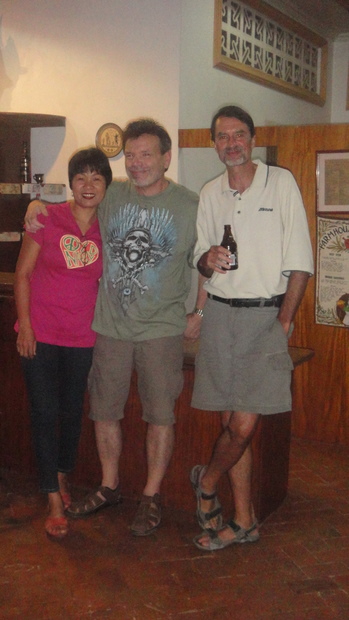 4 thoughts on “American Expats at The Shirven Hotel”