After hanging around the Provincial Capitol in Guimaras for about an hour, I decided to come back to "The Compound." It was around 10 pm. My asawa was angry because I had not, for the first time in over 11 years of marriage,  contacted her via a phone call or text message the entire day. Since I had not returned home from Iloilo City until almost 7:00 pm, she was understandably worried. Thought I had been kidnapped by two American expats I had met at "The Moon Cafe" in nearby Iloilo. I sent a text to Paul from Iloilo, our affable host. He replied  that "I was kidnapped by San Miguel Pale Pilsen." That was an accurate assessment of the situation. 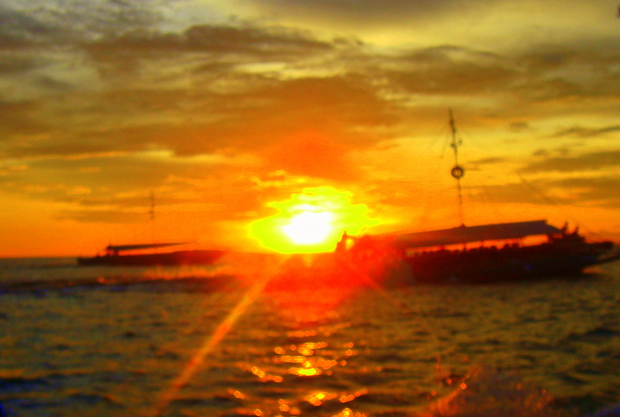 Managed to somehow release the front gate lock and walked towards our front door. The Sainted Patient Wife called out for me to get into the house. I was still in a slightly inebriated state and was tired. I collapsed onto our sofa bed couch with my two bags of luggage sitting nearby.  SPW had earlier packed them for me and angrily announced I could just move to Iloilo tomorrow. She now informed me that she would be going to Iloilo herself tomorrow and get drunk. I said to her that if that's what you want to do, go ahead. I was tired. I dozed off with visions of San Miguel Pale Pilsen dancing through my head.

Woke up the next morning with any hangover. No words were exchanged between my asawa and myself. She was now in a tampo mood, so I wisely stayed out of her way. Decided to go for a walk and when I returned my spouse was just leaving our CR (Comfort Room) and was headed for the front door. I said nothing and went to our backyard. Spied her walking down our muddy, cow-poop laden subdivision road, went back inside and  turned on my computer and tried to write something for this website. Fortunately I already a story read to publish that day. Couldn't keep focused. I doubted that SPW would go on an all day drinking binge, but I was still concerned. Two bottles of Pale Pilsen, and she's toast.

Sent her a couple of text messages around 10 am, already aware that she would not reply. Told her I was sorry,  and that I loved her. I knew she was going to Iloilo to "teach me a lesson" so I just went about my business and continued to work on my website, answering emails, thinking of new story ideas.

At 6:15 pm that evening still no word from my angry asawa. I decided to take a walk around the Provincial Capitol grounds again. Not much I could do at this point. Just wanted to get out of the house.  I went back home about 8:00. Checked in with my brother-in-law, Joery, at his nipa hut in our front yard to see if my wife was home. She had arrived at 6:30. I walked into our bedroom, and SPW was sleeping, fully clothed,  on our couch. I tried to unfold the sofa bed to give her more room, and as I did, she slid off the couch and landed onto our concrete floor! I thought she was drunk.

I could not lift SPW off the floor. She kept repeating: "I just want to sleep. I just want to sleep." I went to get help from brother-in-law and informed my sister-in-law, Alida, that Melinda was drunk. "No, she is not drunk. I talked to her when she got home. She is not drunk."  Alida and her husband, Joery, went into the bedroom with me, and we managed to lift my asawa back onto the couch.


"I just want to sleep! Leave me alone! I just want to sleep!"  However, she was now extremely agitated and started hyperventilating,  grabbing her hands and arms crying that she could not feel them. Kept rubbing them and complaining they were numb. She was having a panic attack. Same symptoms she had back in the States some years ago. I know we needed to get her to the local hospital in Guimaras and get her there fast!

Tomorrow the Conclusion: Chaos in Emergency!