[smartads]This was my first traditional wedding in the Philippines that my asawa and I were attending since moving to Guimaras, the rural province in Western Visayas known for its sweet mangoes and beach resorts. We were in San Joaquin, Iloilo for the ceremony and were serving as sponsors. The bride and groom, John Vincent Sealmoy and Analyn Gange (my asawa's goddaughter) ,  had been kneeling at the altar for quite some time as we sweltered in our classic Filipino attire.  I bet they were as nervous as a couple of porcupines in a balloon factory. 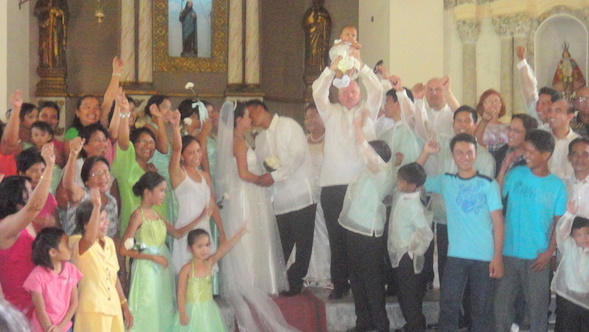 The handsome couple had exchanged their vows before Rev. Fr. Manuel Sevilla after going through "The Rites of Marriage" which included "Scrutiny" ("Analyn, did you come her of your own free will…"). "Exchange of Consent" (the "I do's") and "Confirmation of Marriage Bond" ("What God has joined, man must not divide.") Now if you think this is the time where the priest or preacher turns to the groom and says  "You may now kiss the bride" you've never attended a Filipino wedding before in a Catholic Church. We're just getting started! It's now time for the Rings, Coins, the Veil and the Cord.

The ring and arrhae (wedding coins) bearers were summoned to the altar by Father Sevilla. The rings were blessed and exchanged. John Vincent looked a bit nervous (who wouldn't be?) but managed to squeeze the ring on his new bride's finger. The arrhae (coins which are to symbolize material possessions to support and sustain the couple in their married life) were blessed by the priest and John Vincent handed them to Analyn as he said:"Analyn, I give you this arrhae as a pledge of my dedication to you and our children's well being and welfare in the name of the Father, and of the Son, and of the Holy Spirit. Amen." She accepted the coins. 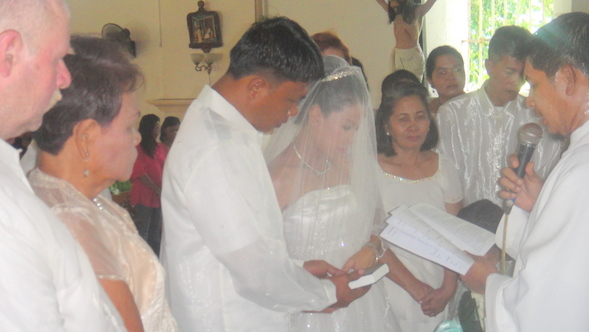 Prayers were offered for the couple, an offering was taken and the lighting of the candles ceremony began. It seems that at several weddings I have attended in the past, there was always some candle that wouldn't stay lit. Same thing happened at this wedding in the Philippines.There was one stubborn candle that had a mischievous flame that kept going out. One of the Filipino sponsors that sat in front of me kept instructing a groomsman to keep the candle lit.

I wonder if anyone has ever thought of using those "joker" birthday candles that relight after you blow them out? My asawa uses those things for everyone's birthday cake at "The Compound" and thinks it's hilarious when our nieces and nephews can't blow the trick lights out, even though she's been pulling the same stunt for almost two years now. She's easily amused. She married me, didn't she?

The veil and cord ceremony is next. Two bridesmaids  are called forward to  place the veil over the bride and groom. The veil symbolizes humility and is to remind the couple of the presence of God who willed that they became husband and wife. A bridesmaid and groomsman are summoned to place a cord on the couple. The cord is the symbol of the lifetime bond brought to them by the Sacrament of Matrimony.

The offering is then blessed, Communion is given, the Lord's Prayer is recited, a nuptial blessing is offered and the cord and veil are removed. A final blessing is given and the priest presents the couple to the church. The marriage contract is signed by all of the sponsors who kick in 100 pesos (2.32 US Dollars) each for the license fee. The Filipino Wedding Mass has taken a little over an hour but now it's picture taking time. Another hour passes by. I'm getting hungry as my wife and I did not take any breakfast before we began our journey in Iloilo. I'm ready for some food and drink.  The heat in the church is unbearable, and I'm want to shed my Barong Tagalog. I'm hoping for some chilled bottles of San Miguel Pale Pilsen to cool me off. I have to be patient a bit longer.

Next post, The Reception! The guys and the gals have to sit at separate tables, and I meet some more Norwegian guys and a Brit along with some very kind Filipino gentlemen.  I'll leave you with these photos from the wedding ceremony. 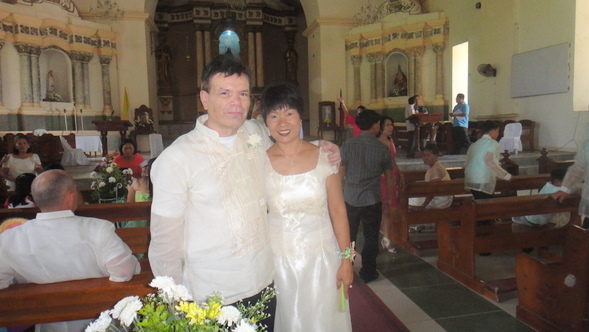 First up is The Kano, your website's author, minus my beard along with the beautiful Sainted Patient Wife. Take a look at that Barong Tagalog, it's mighty snug on me. 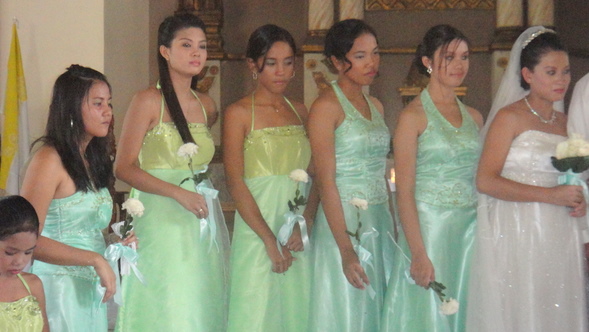 Here's the flower girl, bridesmaids and the bride. A group of Pretty Pinays without a doubt!

4 thoughts on “Wedding in the Philippines. Rings, Coins, the Veil and the Cord”