[smartads]San Joaquin, Iloilo. Sunday morning. 9:15 am. The wedding of  John Vincent Sealmoy and Analyn Gange was due to start at 10:00 am. This was the first wedding in which my asawa and I would be a sponsor, and I did not know what to expect. Since the church, St. Joachim Parish, was 90 minutes from Iloilo City which is another 45 minutes from our home in Guimaras, we were not able to attend any rehearsals. I would just follow my wife's lead. A wise man always does. 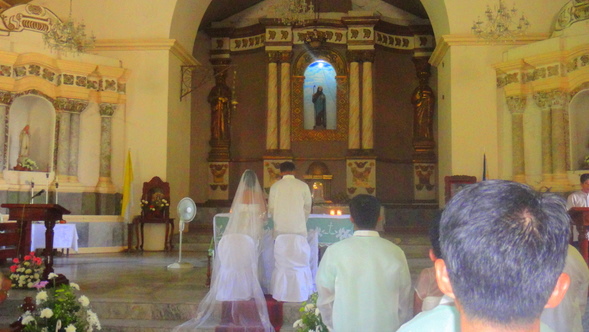 After not being able to locate a CR, Comfort Room, in the church, a relative of my asawa was able to locate a lady that directed us the rectory of the resident priest, Rev. Fr. Manuel Sevilla,  and led us to a room where we could change our clothes. I just threw my Barong Tagalog over my head since I wore my dress pants, shoes and white t-shirt on our trek to San Joaquin, but my asawa had to change into a traditional Filipina dress. Trouble his, my fat fingers couldn't button the sleeves or top of my barong, and the lady that led us to the rectory had to help me. The top button was left undone since I had gained a few pounds since I last wore the shirt at our formal Catholic wedding in 2004. I was lucky to get the thing over my       gargantuan head.

There was a brown out, power outage, and once that Barong Tagalog was put on I was pouring sweat faster than a hungry monkey munching on a bag of salted peanuts. It was sweltering! After my wife used the CR, we headed back to the church. We met some older relatives of my asawa as we waited for further directions and chatted with them. Well, The Sainted Patient Wife did most of the talking (for a change) as they spoke in their native Ilonggo.I just sat around, smiled and nodded my head a lot.


Soon all the sponsors were given instructions on where to stand for the wedding march, and we took our seats in the pews across from our respective partners. The gentlemen in front of me was a Norwegian by the name of "Bjorn." He was accompanied by a Norwegian lady who I believe was his wife. His brother was married to one of the sisters of the groom. Bjorn was in the Philippines for the first time on a three week vacation.

Ten am passed. The wedding had not started yet, but I am quite accustomed to "Filipino Time" having been married to my Filipina wife for over 11 years and after almost two years of living in the Philippines. I was in no hurry. I anticipated that the trip to San Joaquin in Iloilo and the wedding would be an all day affair. I'm retired. I was welcoming this break from my usual routine.

Around 10:15 the Wedding March started, and I made it down the aisle, arm-in-arm with my beautiful Filipina wife without stumbling and took my seat next to Bjorn. He had never been to a Catholic wedding before, and I had never been an observer,  only a participant. Had no idea how long the ceremony would last. Anywhere from one to two hours I was told. 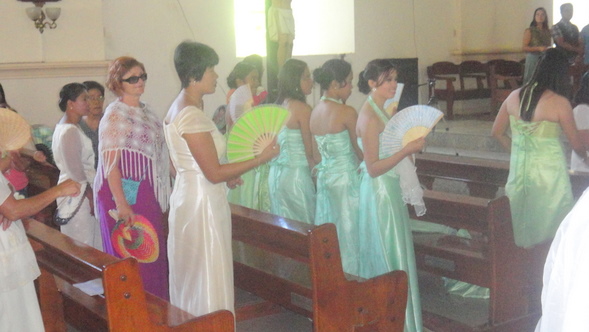 Program in hand I tried to follow along and just jumped up and down from my seat when anyone else did. Just like when I attend Mass with my asawa at St. Michael the Arch Angel Catholic Church in San Miguel, Guimaras. Sweat dripping from my brow, I was hoping for the shortened version. I can assure you that the bride and groom were probably wishing for the same thing. It's nerve-wracking kneeling down in front of a huge group of people with the priest standing in front of you.

Ahhh, but we were just getting started. I braced myself with visions of bottles of San Miguel Pale Pilsen dancing in my head, hoping they would be served at the reception afterwords. I had a feeling I would be experiencing the full-blown Mass and would be stationed at my pew for a long time. A very long time.


(Next post, The Wedding Ceremony. Rings, Coins, the Veil and the Cord.)