The 2011 Manggahan Festival recently held in Guimaras province of the Philippines ended April 17, but I wanted to publish this photo of some grilled treats that my asawa and I enjoyed during the festivities. My spouse devoured some grilled squid while I had some chicken wings, P25 each (58 cents in USD), along with a grilled chicken leg and thigh for P65 ($1.51). The food went great with some lukewarm bottles of San Miguel.

We later switched to some pieces of grilled lechon (pig) for only P12 (28 cents) each, but later discovered that the grilled chicken intestines were going for only P2 (almost a nickel) each. Thanks to one of the American Peace Corps volunteers that told us about that. We didn't try any of those, however, but after several bottles of San Migs or Red Horse, they probably wouldn't have tasted just fine. I asked the grill chef on the right of the above photo what the BBQ sauce that she used on the grilled meats consisted of. Turned out to be a combination of ketchup and soy sauce. It wasn't the sweet ketchup, which I hate, and really added to the flavor of everything.

While making the rounds at the Manggahan Festival we encountered Mae Estuche, the most beautiful woman in Guimaras (aside from my asawa) who  earlier in the evening had won the Mutya Ng Guimaras 2011 (Pearl of Guimaras) beauty pageant. She's rightfully celebrating with some of her friends (that's her at the end of the table dressed in black.) I said "hello" to her and asked if I could take a group picture. Such a gracious lady. I will attest that Ms. Estuche did not have any bottles of San Miguel at her place in the table (not that's there's anything wrong with celebrating a big win) and was posing for others coming by wanting their photo taken with the beauty queen. She has been kind enough to add me as a Facebook friend and will be able to keep me posted on the next competition she is slated to enter. 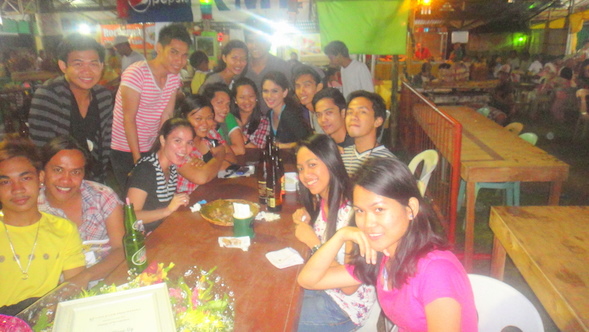 Everyone in the group seemed to having fun and were a friendly bunch. You can see they struck a great pose for the picture. Here's some more photos from Mutya Ng Guimaras 2011. What a group of absolutely gorgeous Filipinas the contestants the beauty pageant had. My asawa spied many of them walking along the grounds of the festival, but I did not recognize them in their "civilian" clothes. Guess I was paying too much attention to the swimsuits and gorgeous gowns they were wearing before. 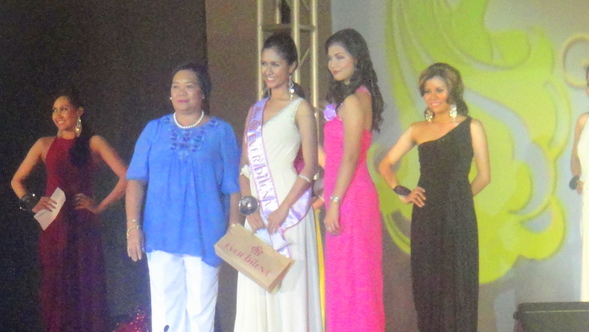 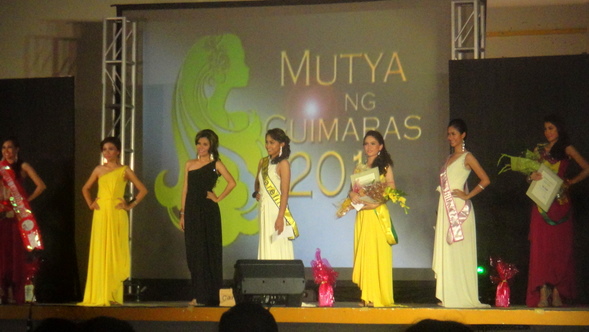 The eventual winner of the pageant, Mae Estuche, is third from the right. 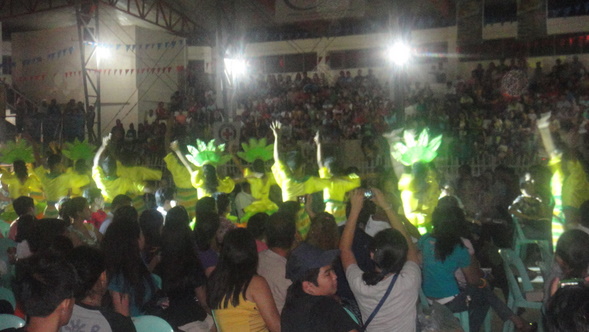 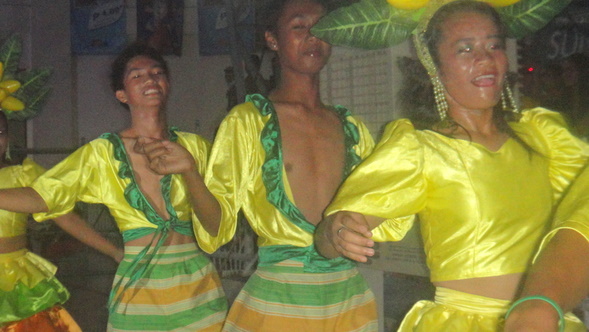 Some of the dancers were wearing a colorful mango head dress and were quite energetic and entertaining. It was a great evening, and I met some new people and made some new friends. Drank a few Red Horses and heard some great music from the Twilight Band from Iloilo. Another day in the Philippines. Taking it easy and enjoying life. What more can you ask for?