"The Rooster Crows at 4am!" staff photographer caught some exclusive photos of our local labor crew in Guimaras!  The construction workers were furiously digging a trench to install a pipeline from our septic tank to alleviate the water level in it which had filled with water due to recent rains. The American Standard toilet in our Comfort Room was not flushing due to the full water level in the septic tank, so the leader of the crew (in the blue top) organized a group of locals to get the trench dug before nightfall. 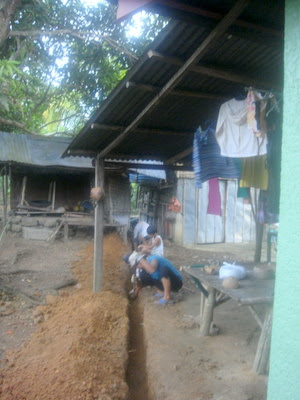 The construction crew boss was of course the real dictator  boss of "The Compound" where we live in rural Guimaras, my asawa, The Sainted Patient Wife. I am just a figurehead leader without any real power or authority. Any visages of my former "King" status are long gone. I had no qualms with my wife supervising this project as I sat in our room with the fan blowing on me, sitting comfortably with a glass of tubig (water) by my side. Frankly, SPW is more mechanically inclined than me, and with our brother-in-law Joery on hand to install the sections of pipe, I was not needed and would be in the way. Our ten-year-old nephew who had a day off from school, and my mother-in-law, The Feared Giant Lizard Killer, were also recruited into the crew.
It was nightfall before Joery had the pipes installed and covered with dirt. I was in the CR taking a shower when my wife yelled through the bathroom window to ask me to flush the toilet to see if it worked. Excess water from the septic tank was now flowing through the newly installed pipes, but nope, still wasn't flushing!  SPW uttered a word that cannot be printed in this blog but makes reference to a bull defecating. That is very unlike SPW, but she is quite frustrated. Still not flushing this morning so it's off  to the local hardware store to buy a plunger. You would think with all the B.S. I sling around here, we would have had one by now!

UPDATE! Thanks to my suggestion of buying a plunger, and the help of my brother-in-law, our toilet is now unclogged! Seems the recent filling up of the septic tank caused a clog  (along with some other crap) and even with SPW's new pipeline draining off some of the excess septic tank water,  it took Joery's efforts with the  plunger to finally take care of  the situation. All is well in paradise again!