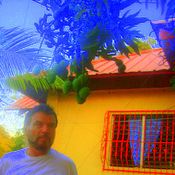 Four am this morning. My wife and I both awake to the sound of someone rattling the front door of our home in the Philippines. We both jump out of bed, and turn on the front porch light. No one in sight. Fortunately the door was locked.  There is no doubt that this was an attempted break-in. 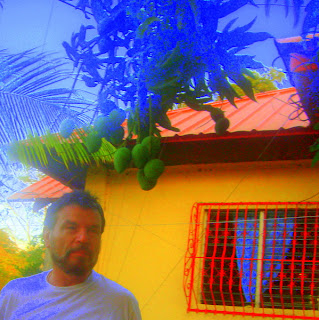 Our front entrance used to have a separate outer door constructed of metal bars (see photo, outer  door was similar to the window bars we had) to thwart break-ins, but since last year's construction project, the new solid mahogany wood door installed was too big for the former barred outer frame, and we never had it replaced.
We did not have a new back door installed, but when our remodel was done, it was necessary to remove the metal security bars from the rear entrance, but the security door was not put back on. But it will be.
I have remarked many times that I felt safe in our subdivision in the Philippines. Rest assured it is not the traditional subdivision we lived in back in America. We have no one to the back of us. Only the edge of a jungle. No one to the left or right to us except for Albert's Motorcycle Center which is a good 250 meters down the road from us. There is a neighbor across the road to the right of us.  No street lights or paved roads in our subdivision.

For the first time since moving to the Philippines I am concerned for our personal safety. There is a very strong possibility that if the intruder was able to gain entrance to our home we would have been killed. I'm a target here, and I know that.

We have had new tricycle drivers take us home from the Jordan Wharf about 25 minutes away, and I suspect that the intruder could have come from that area since it was only a day ago that I took a tricycle from the dock to our home. It's off to Iloilo City again to buy a new deadbolt for the front door, and check on motion detection lights.

The false sense of security I felt here has been shattered due to this attempted break-in.  I think the intruder will return. Maybe I'm being paranoid. But I know we have to upgrade our security and become more vigilant. I want to be able to sleep soundly again at night.