Skip to content
07/15/201010/08/2019
First Year in the Philippines!  July 15th, 2010 will mark my first year living in the Philippines. My patient Filipina wife and I arrived in Manila one year ago, stayed at her sister Emily's house and slept in a bedroom with air con. That was the last air conditioning we had until mid April of this year when we had one installed in our present home in Guimaras, a residence I like to fondly call "The Compound". 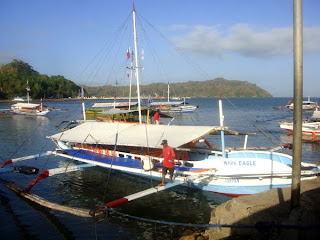 Slept under a mosquito net for about six months and with the beginning of the rainy season the pesky insects have returned, but we have abandoned the net. Too hot to sleep under even with the air con (for me, anyway;  my wife is wearing PJ's with long pants now since the air con which I have set at 24 C,  73.4 F, is too cold for her.  For those wanting to know, I sleep with boxers on. The same style I remember my Grandpa used to wear, God bless him.)
I also have a mosquito repellent device plugged into our electric outlet at night, and with our newly screened door and windows in our bedroom, we have noticed a decrease in the mosquito population.
I had announced in my previous blog, "The Rooster Crows at 4am!",  that my wife and I would be going back to live in the United States.  My long suffering asawa (spouse), or LSA,  only has a Permanent Resident Status in the United States ("green card"), and would have had to return to the States before a year in order to maintain her status unless she obtained a reentry permit or returning resident visa.
Another part of our previous decision to return to America was a drop in our retirement account investments. At one time we had lost about 30,000 dollars due to a drop in the stock market (while 30,000 is a small amount compared to what many others have lost, I was still concerned.)  My wife and I felt we would have to return and find jobs again.
Fortunately, our retirement account situation stabilized, and we both decided to stay in the Philippines and make the best of things here. We both do not need jobs  in the Philippines because of our aforementioned retirement account and the generally cheaper cost of living here, but my wife works around "The Compound" daily, cooking and cleaning.  I "work" on this blog. Tomorrow, more reflections on this past year living in the Philippines.
Share
Tweet
Pin
Share
Share
0 Shares
FEATUREDasawacrfilipinaguimarasliving in the Philippinesmanilapermanent resident statusphilippinephilippinespump boatroosterrooster crowsthe compoundvisa - by The Kano